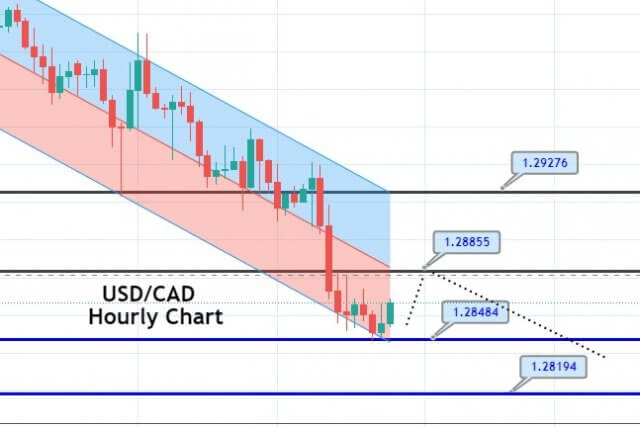 The USD/CAD pair was closed at 1.28619 after placing a high of 1.29411 and a low of 1.28519. The USD/CAD pair extended its losses for the 3rd consecutive day on Thursday due to broad-based U.S. dollar weakness and the rising crude oil prices.

The USD/CAD fell to its lowest since October 2018 on Thursday as the U.S. Dollar Index (DXY) reached 90.50 level, its lowest for 31 months. The U.S. dollar weakness could be attributed to the latest progress made in the talks of stimulus relief package in the U.S.

The Top Democrats officials, including President-elect Joe Biden, House Speaker Nancy Pelosi, and the Senate Minority Leader Chuck Schumer, have said that they favored a $908 billion worth bipartisan bill for now as it was the starting step towards the stimulus package. These comments from Democrats raised hopes that a deal might be reached between Republicans and Democrats. Both parties have a shared view that there was a need for a 2020 stimulus package in the economy and that a deal should be reached soon.

This progress raised the hopes and optimism in the market related to the U.S.’s stimulus package and weighed heavily on the U.S. dollar that ultimately added in the losses of the USD/CAD pair. Meanwhile, the WTI crude oil prices increased on Thursday as producers, including Saudi Arabia and Russia, resumed discussion to agree on how much crude to pump in 2021 after earlier talks failed to compromise how to tackle the weak oil demand coronavirus pandemic.

In late Thursday, OPEC+ announced after three days of discussion that they have agreed to increase the production by 500,000 barrels per day beginning in January. This will bring the total production cuts at the start of next year to 7.2 million BPD. On Thursday, the rising crude oil prices added strength in the commodity-linked Loonie that added further pressure on the USD/CAD pair.

The USD/CAD traded in a selling mode, falling below the 1.2885 level to test the support area of the 1.2845 level. Bearish crossover of 1.2845 level can extend selling bias until 1.289 level. We opened a selling trade during the European open, but it seems to consolidate sideways ahead of the NFP figures. Here’s a trading plan for now…