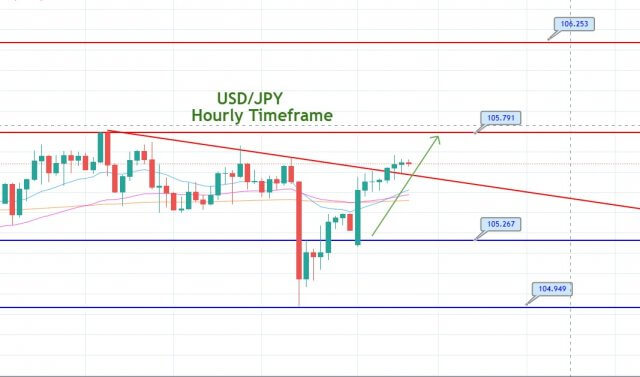 On the contrary, the broad-based U.S. dollar, triggered by the low safe-haven demand in the market, becomes the key factor that capped further upside momentum for the currency pair. Currently, the USD/JPY currency pair is currently trading at 105.65 and consolidating in the range between 105.28 – 105.68.

As we already mentioned, market trading sentiment has been gaining positive traction since the day started and supported by the optimism over the U.S. President Donald Trump’s recovery from COVID-19. It should be noted that the Trumps’ doctors told that President Trump was doing well and could be discharged from his military hospital as soon as Monday. This positive news urged investors to withdraw their money from safe-haven assets. As in result, undermined the safe-haven Japanese yen and contributed to the currency pair gains.

Apart from this, the updates suggest that the national leader spoke to U.S. Treasury Secretary Steve Mnuchin over the weekend for the COVID-19 stimulus, which raised hopes that deadlock could end sooner. This also favored the risk-tone sentiment and undermined the safe-haven Japanese yen.

Across the pond, the currency pair’s gains were further bolstered after the Bank of Japan (BOJ) Governor Haruhiko Kuroda shared the gloomy picture over Japan’s economy, which adds additional pressure around the JPY provided further boost to the currency pair. As per the latest report by Bank of Japan (BOJ) Governor Haruhiko Kuroda, “Japanese economy in severe condition but picking up.” He further added, “Uncertainties surrounding the outlook remain extremely high.”

However, the market trading sentiment was unaffected by the fears of fresh lockdown restrictions in Britain and Europe. Whereas, the usage of dexamethasone in President Trump’s treatment keep questioning the market optimists.

At the USD front, the broad-based U.S. dollar extended its previous session bearish bias and failed to gain any positive traction during the European trade Monday amid risk-on market sentiment. Apart from this, the greenback losses could also be associated with Friday’s released mixed U.S. data, which instantly raised doubts over the U.S. economic recovery. However, the U.S. dollar losses might stop bulls from placing any strong position and keep a lid on any further gains for the USD/JPY pair. Whereas, the U.S. Dollar Index Futures that tracks the greenback against a basket of other currencies dropped by 0.13% to 93.787 by 10:12 PM ET (2:12 AM GMT).

Moving ahead, the market traders will keep their eyes on the U.S. economic docket, which will show the release of the ISM Non-Manufacturing PMI. This data might affect the U.S. dollar price dynamics and provide fresh direction for the pair. In the meantime, the updates surrounding the fresh Sino-US tussle, as well as the coronavirus (COVID-19), could not lose their importance.

The USD/JPY is also trading neutral at 105.560 amid thin trading volume and China national holiday today. The downward trendline is extending resistance at 105.560 level on the two-hourly timeframes today. The closing of Doji candles below the trendline is suggesting neutral bias among traders. The technical side of USD/JPY may extend the pair lower towards 105.200, and the series for EMA is now developing support at 105.400 level. On the flip side, the bullish breakout of 105.590 level may lead the haven pair towards 105.800. Consider taking buying trade over 105.450 level and selling below the same today.