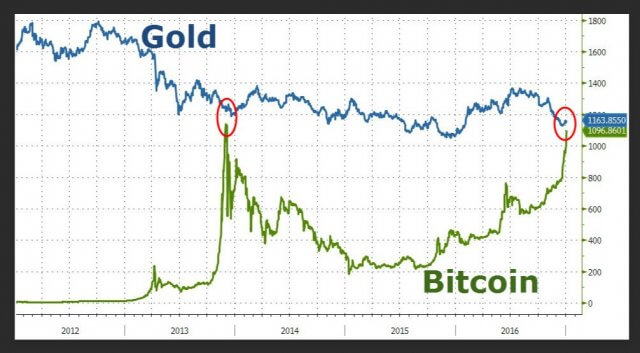 Traditionally, gold is considered a protective asset in which money flows when problems arise in stock and currency markets. This can be seen very simply in the example of January 2016, when the collapse of the Shanghai Composite index began, which brought with it the other stock indices. Investors reacted immediately to the recession and transferred their money to gold, literally, in two months the price of gold rose from 1,090 to 1260 US dollars.

A similar situation could be observed on the eve of the referendum in the United Kingdom, as the June quotes went from 1210 to 1350 US dollars. The year 2016 was saturated from the point of view of fundamental factors. Because as soon as the last event of the year, the elections in the United States, was completed, the quotes at the end of the year fell to almost the level of January 2016.

Below are several arguments in favour of investing in gold:

Confidence in gold. Gold in the minds of investors, a priori, is considered a reliable financial instrument. This image was formed in past centuries when gold acted as a monetary equivalent and a means of monetary support. For a long time, gold will be interpreted as a reliable asset.

Limitation of natural resources. Gold reserves are limited, the industry’s constant demand for metal will support the price.

Freedom of Tenure. Physical gold can be inherited or donated to another person.
Liquidity. Gold has the advantage that in any form it presents, it can be converted in a fairly fast way into another type of asset.

Risk diversification. In the years 2008-2010, when the foreign exchange, stock, and commodity markets experienced stagnation, gold increased by more than 80%.

Cryptocurrency quotes behave similarly: on the eve of the referendum in Britain, bitcoin appreciated by more than 50%. After the growth of spring quotes, analysts began to talk seriously about the fact that cryptocurrencies can become for investors the “safe haven”, whose role so far is played by precious metals. Optimistic investors believe blockchain has a future, while the cryptocurrency market is a new investment trend that will replace currency and commodity markets. On April 1, Japan officially recognized Bitcoin as a currency and thus marked the beginning of a new investment instrument.

Below are the arguments in favour of cryptocurrency investments:

Profitability dynamics. In the last 6 months, BTC showed a growth of more than 500%, a similar dynamic of ETH. Despite the strong volatility (5-10% per day), in the medium and long term, the dynamics are upward. Gold in the last 10 years is in the range of 800-1400 US dollars (except for the peak of growth at the time of the mortgage crisis in the US).

Corporate support. In late February 2017, Ethereum Enterprise Alliance was created, which included more than 150 corporations, including CME Group, Mastercard, Intel, Microsoft, J.P.Morgan. This speaks to how corporations see a perspective on cryptocurrency and are ready to support it. This will inevitably be reflected in the future growth of their contributions.

Limited emissions. A limited resource in the face of increased demand generates price growth. Cryptocurrency emission is limited, cryptocurrency does not have a single emission center. Gold production has been out of control for a long time and has not been backed up by a single currency.

Investment facility. The purchase of gold involves a number of difficulties: the certification procedure, the guarantee of physical metal storage conditions, etc. You can win in cryptocurrency in a few mouse clicks.

Transition to the era of digital technology. Even the Bretton Woods and Jamaican systems converted gold from a monetary asset into an investment asset. Today, when the world enters the world of digital technologies, it is an electronic cryptocurrency that becomes the focus of investors’ attention.

Availability. Investment in gold is available to investors with relatively large seed capital, and gold can only be purchased through specialist stock exchanges or banks. Anyone with the Internet can invest in cryptocurrencies.

I think these arguments are enough to secure the prospects of cryptocurrency. Gold is slowly falling behind, becoming attractive only to conservative investors, who are used to “keeping” their assets. Already 20-25 years ago the Internet came into the world, changing the consciousness and lifestyles of millions of people, and now comes a new era, the era of the blockchain.

Investing in cryptocurrencies is possible as follows:

-Create a farm and mine or do cloud mining. This option is quite expensive and has a long return.

-Trading on stock exchanges. The disadvantage of this method is the reliability in the purses: the purse and private services can be hacked, a purse on a hard drive is difficult to recover if it fails.

The popularity of cryptocurrencies is intensifying the activities of scammers. To date, there are more than 1000 cryptocurrencies (according to the Coin Market Cap website) and some of them are HYIPS that are barely updated every month. So, in conclusion, some tips on how to invest correctly in cryptocurrencies:

-Cryptocurrency is a currency within an application developed on blockchain technology. Analyze the feature of the application, its usefulness, and prospects.

-Many decentralized applications will be developed within Ethereum because the long-term cost of ETH will only grow. Invest in cryptocurrencies, they’ve already proven their solvency.

-A project that offers a fixed income per week (month) – HYIP.

-Do not rush to participate in ICO. There are examples when the value of tokens falls after their first placement.

Conclusion. Gold is gradually losing its role as an attractive investment asset. Blockchain technology is changing the world, creating a new economy, and opening a new era of investment. The future of cryptocurrencies and the one that believes in the latest innovative technologies of the Internet today, and tomorrow it will be possible to multiply its investments several times.