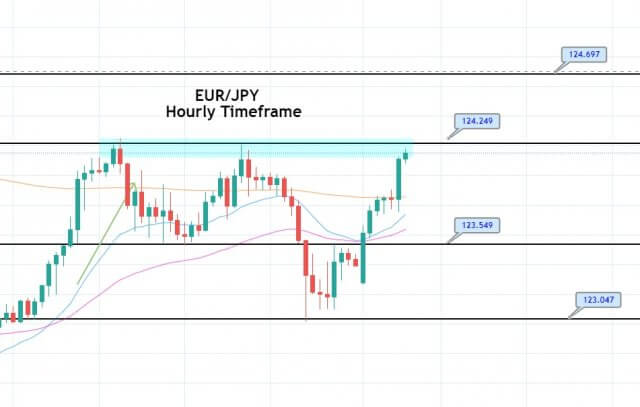 On the other hand, the market risk-on tone also supported the shared currency, which boosted the currency pair. Conversely, the negative Eurozone inflation and expectations for additional European Central Bank (ECB) easing could be considered as one of the major factors that kept the lid on any further gains in the currency pair. At the moment, the EUR/JPY currency pair is currently trading at 123.91 and consolidating in the range between the 123.33 – 123.94.

The market trading sentiment remains well supported by the optimism generated by President Trump’s doctors’ comments that he could be discharged from the coronavirus hospital as soon as Monday. This, in turn, boosted the market sentiment and helped the currency pair pick some fresh bids on the day. However, the market risk-on sentiment was witnessed after the S&P 500 futures jumped and rose more than 0.6% on the day.

Besides, the S&P 500 futures’ upticks were further bolstered by optimism over the US aid package talks. The national leader spoke to US Treasury Secretary Steve Mnuchin over the weekend for the COVID-19 stimulus, which raised hopes that deadlock could end sooner. This also favored the risk-tone sentiment and undermined the safe-haven Japanese yen.

Apart from this, the reason for the upbeat market sentiment could also be associated with fresh hopes of a soft Brexit, triggered after the weekend meeting between the UK PM Boris Johnson and EU Commission President Ursula von der Leyen. This, in turn, undermined the safe-haven Japanese yen currency and extended support to the currency pair.

Across the pond, the reason for the currency pair bullish bias could also be associated with the latest reports suggesting that the Bank of Japan (BOJ) Governor Haruhiko Kuroda sounded gloomy over the outlook on Japan’s economy, which keeps the Japanese yen currency under pressure and contributed to the currency pair gains. As per the latest report by Bank of Japan (BOJ) Governor Haruhiko Kuroda, “Japanese economy in severe condition but picking up.” He further added, “Uncertainties surrounding the outlook remain extremely high.”

On the contrary, the ECB’s pressure to do more easing is rising after weak Eurozone inflation, which tends to support the shared currency and becomes the key factor that cap further gains in the currency pair. The cost of living in the shard currency area plunged deeper into the negative territory last month.

Looking forward, the market traders keeping their eyes on the news concerning the American President’s health. Apart from this, the US ISM Services PMI for September, expected 56.0, will be key to watch. In the meantime, the updates surrounding the fresh Sino-US tussle, as well as the coronavirus (COVID-19), could not lose their importance.