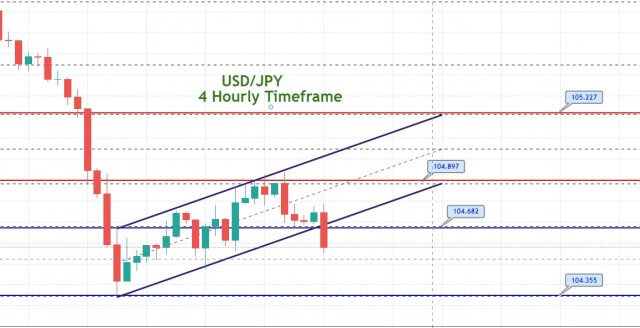 The USD/JPY pair is trading sharply bearish after violating the bearish flag at the 104.680 level. Below this level, we may have more selling trade opportunities. The USD/JPY pair traded with a positive note during the whole Thursday session after a goodish pickup in the U.S. dollar demand. The rebounded U.S. dollar helped currency pair USD/JPY to gain positive traction and move away from the six-week lowest level it touched on Wednesday.

The slow progress in the U.S. stimulus measure package attracted some buying in the greenback that dampened the hopes that financial aid will be delivered before elections. The statement by House of Representatives Speaker Nancy Pelosi that soon there will be pen to paper on the stimulus bill failed to impress investors, and the USD/JPY pair continued moving in the upward direction.

Pelosi even said that the stimulus package could be passed in the House before election day, but investors were somewhat unconvinced that the bill could pass through the Senate due to the strong opposition from Republicans over a bigger stimulus deal. This, in turn, weighed on risk sentiment and supported the Japanese Yen that ultimately capped further upside in the USD/JPY pair prices.

Apart from developments surrounding the U.S. fiscal stimulus, the USD bulls further took clues from the better than expected release of the U.S. initial jobless claims. The number of Americans filed for unemployment benefits declined to 787K during the previous week for the first time against the projected 860K and supported the U.S. dollar. The decline in unemployment claims means less need for a U.S. stimulus package and more strength for the U.S. dollar and USD/JPY pair.

On the data front, the C.B. Leading Index from the U.S. dropped to 0.7% against the expected 0.8% and weighed on the U.S. dollar. The Existing Home Sales advanced to 6.54M in comparison to projected 6.20M and supported the U.S. dollar. Another favorable economic data release gave strength to the U.S. dollar that pushed the USD/JPY pair even higher on grounds. Meanwhile, the rising number of coronavirus cases across the globe and fears for economic recovery due to lockdowns imposed to curb the spread of the virus raised the safe-haven appeal, supported the Japanese Yen, and weighed on the USD/JPY pair to limit its bullish move on Thursday.