Thank you for joining this forex academy educational video. In this session, we will be looking at the FTSE 100 index. 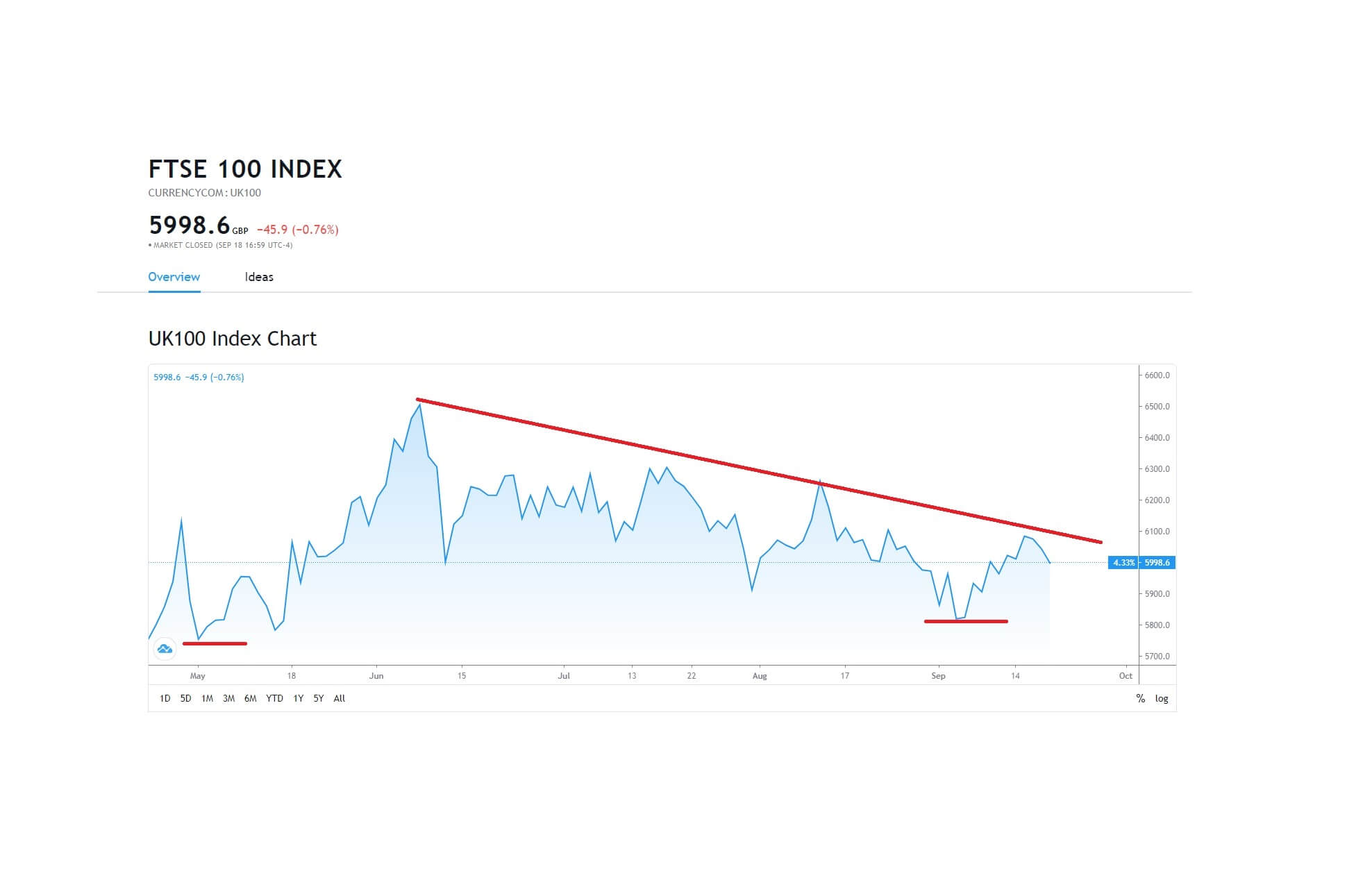 In this yearly chart, we can see the red highlighted low of 5,750, which was the low point from March having crashed down from January’s peak of just under 7,600 as a result of the Covid related pandemic causing the UK to go into lockdown. And while the higher peak shows a sharp rebound to 6,500 at the beginning of June, the value of the top 100 UK firms has been falling steadily since then to the current 6,000 at the time of writing. 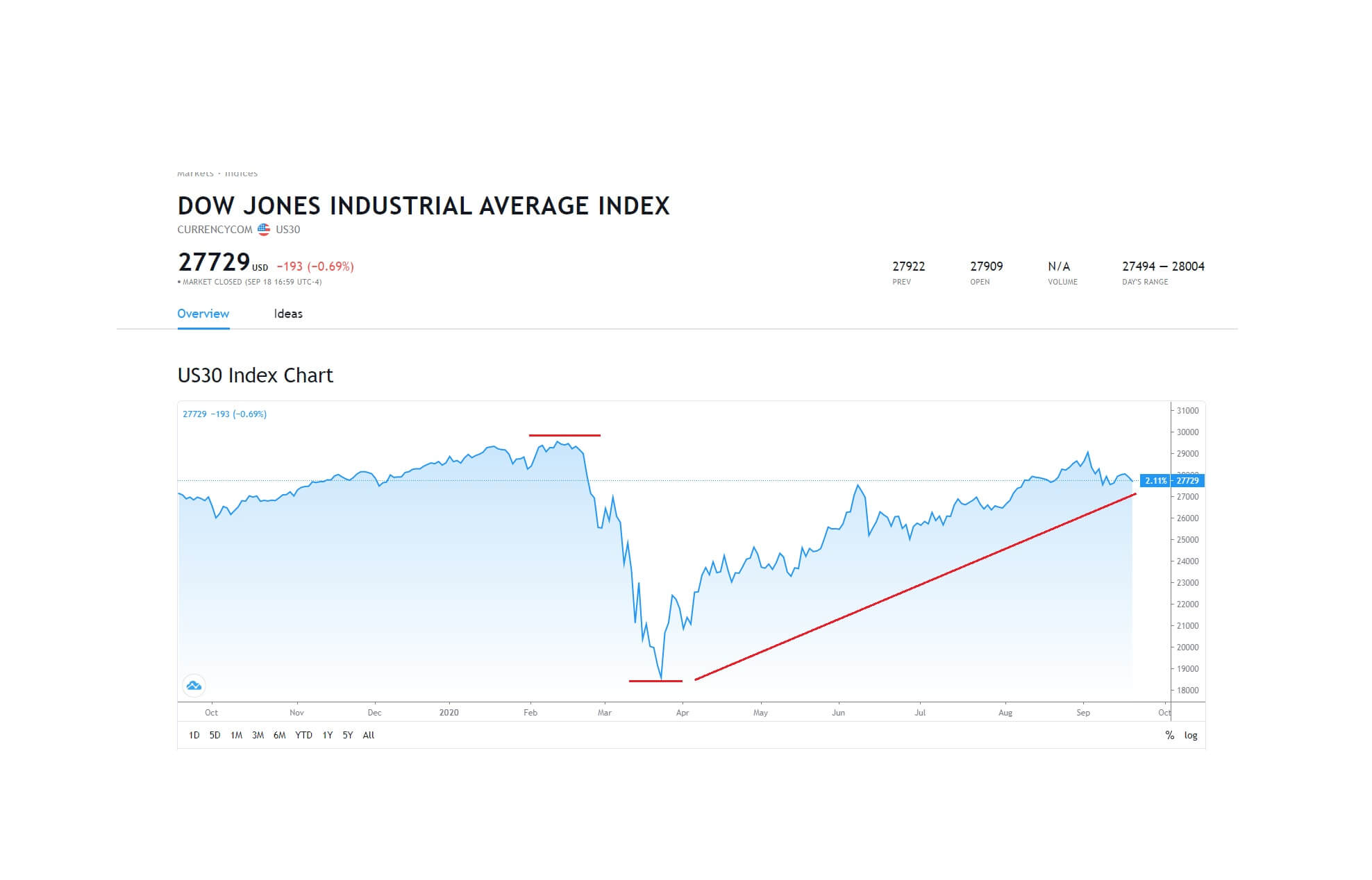 Buy sharp comparison this is the Dow Jones industrial index yearly chart, showing a record high for the index in February of 29500 falling to a low of just above 18000 before a V-shaped recovery took it back to over 29,000, where practically 100% of the original crash was reversed. The NASDAQ fared even better, as did the S&P 500, both of which moved to all-time highs.
While it is impossible to suggest that the two economies are identical, the USA has enjoyed a bull run while the FTSE 100 has faded. And while the US economy is very slowly showing signs of a recovery, the numbers by no means suggest the economy of the USA is in a better shape than before the pandemic. So, what is the driving factor for one and effectively put the breaks on the other?

This can largely be put down to sentiment: the American economy is perceived to have the ability to achieve the same growth as before the pandemic, once the virus is defeated. Therefore, traders and investors have taken a long-term view that the US economy will recover and go on to see growth, and they are taking the risk that the stock market will reflect this at some point in the future. In other words, they see the economy catching up with the stock market rather than the traditional view that the stock market reflects the value of the economy.

However, investors in the British economy are slightly more subdued because of the worries that the British government and the European Union are at loggerheads heads with regards to any future trading relationship now that the UK has left the EU. This is because the European Union wants more regulatory alignment with Britain regarding its future trading arrangements and whereby financial services regulations need to be reflective of both economies and where, for example, safety standards and hygiene standards, remain level pegged, because the European Union has a duty to ensure that the citizens of the EU do not receive substandard services, or substandard food and food substances, or substandard electronics and motor cars and equipment, etc.

The EU has also placed pressure on the British government regarding fishing rights for the EU in British waters and where there seems to be no possibility of an agreement on this subject. And also another major stumbling block is the fact that Ireland is a part of the EU you and Northern Ireland is a part of the United Kingdom, and there is no border in place, in which case unchecked goods and services could move between the two areas, leaving the door open for infringements, including tax revenue losses and the movement of people without passports and livestock movements without regulatory checks by the EU. The whole thing is extremely complicated. But the bottom line is if these issues cannot be agreed upon in the next few weeks, there is a distinct possibility that no official trade agreements will be set in place, where the United Kingdom was hoping to have a free trade deal with the EU and in which case the UK will need to revert to world trade organization trading rules, which will be more expensive for the United Kingdom economy in the long run.
So where now? 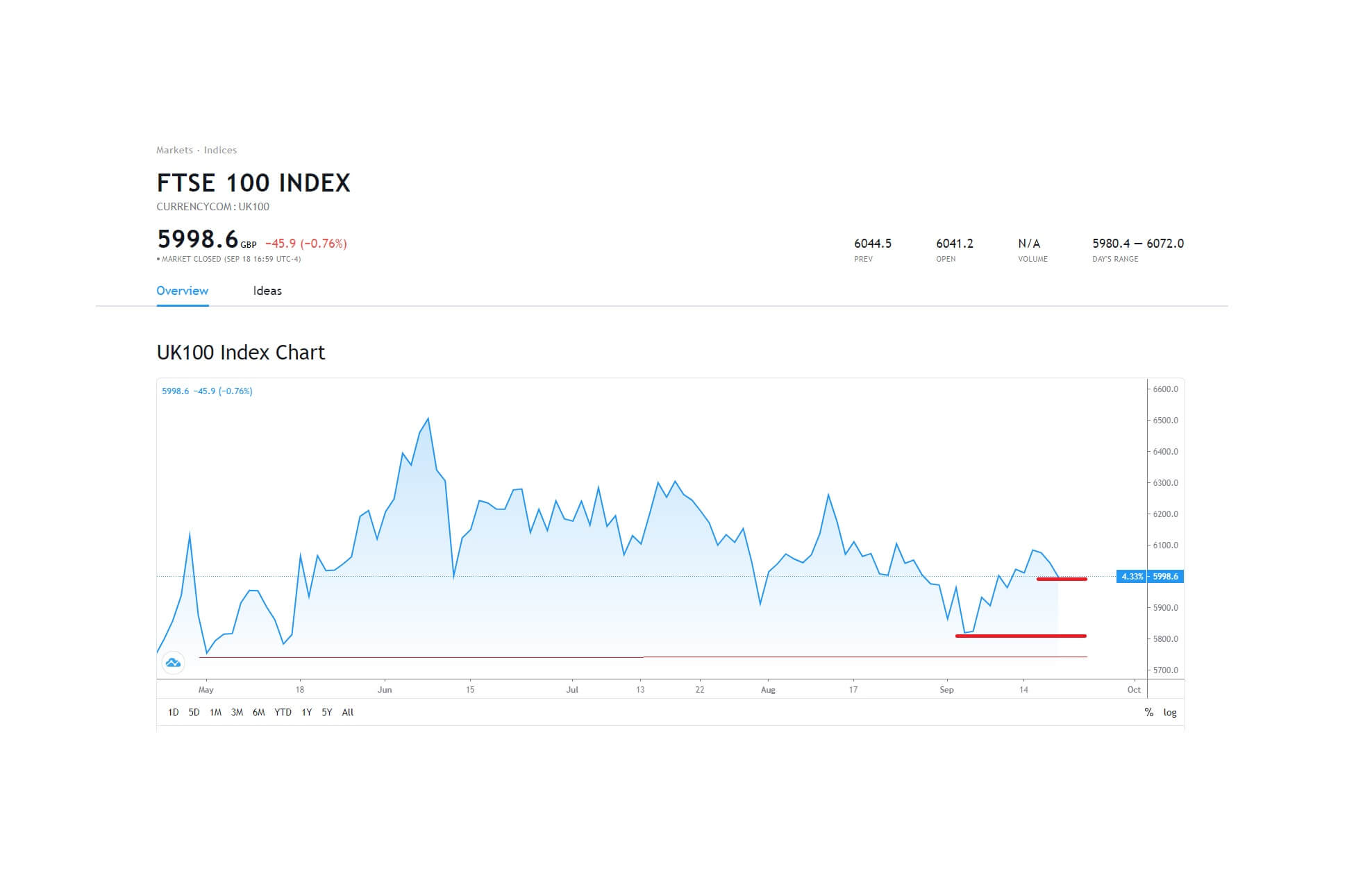 The FTSE 100 is currently in a critical area, which is of psychological importance: 6,000. Should price action fall just under and then push up and find that the 6,000 area becomes a line of resistance, we could see price action fall down to the previous low of early September of 5,800 and, then, perhaps a retest of May’s low at just above the 5,700 level.

The longer that the EU and UK remain at loggerheads and cannot agree on a future trading relationship, the more chance we will see that this index will push lower and if the UK ends the transition period without a formal agreement at the end of December this year, the pressure will be on the FTSE 100 to fall even lower because we are still in the grips of the pandemic, coupled with WTO trading rules and no formal trading agreements in place with the EU or the USA, which will leave investors wondering how badly this will affect the British economy in the next 12-months.