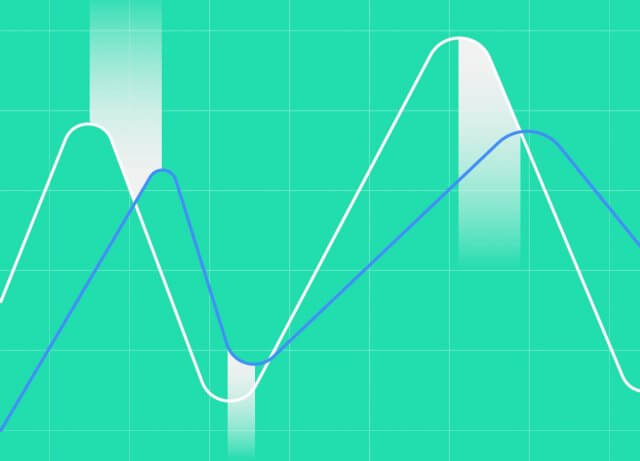 Veteran traders often develop a kind of intolerance to certain life and relationship issues. This intolerance developed from a professional mindset for decision making, making it clear for them to decide should they get involved, spend time, or not with a certain person or issue. To some, this behavior may seem like intolerance but in fact, it is decision-making skills used in real life. Veteran traders have realized progression is quick when we stick to our decisions and learn from bad ones, making it easy to repeat the right call in already experienced situations.

When it comes to deciding which trading tools to try and test, it is also clear to them. If we categorize indicators and tools to Lagging and Leading, they know which to pick based on their system, mindset, and experience. Lagging indicators are not regarded as good to trading by the masses since they have the “lagging” word to it. So beginners may wonder, why are people still creating them, and why traders use settings that seem unresponsive to the market price action? Even if you are testing your trading system for a few months you will realize lagging indicators are the kind you have better results with for trend confirmations.

The role these lagging indicators have is mostly trend confirmation, but interestingly, volume indicators are almost always lagging type too. Now, let’s be clear what is the definition of a lagging indicator. One of the better explanations is given on babypips.com, leading indicators fall into the reversal category while lagging leads you to trends that are already happening. Leading indicators give you the signal to trade before the trend emerges, therefore they “predict”. As with most predictions, they do not foresee the future and fail in a trending environment.

Consequently, experienced trend-following traders do not use them to find trends. But it does not mean they do not use them for other purposes. One of the most popular leading or reversal indicators is RSI. Some reversal indicators based on the RSI are very good trend exit point indicators, as described in one of our articles about when to exit. Most of the leading indicators are based on the oversold and overbought concepts or levels where they tend to be range-bound. Trends do not respect any ranges and the best lasts for weeks.

Now, for psychological reasons people like to get into action and try to predict or bet on many events, including trends. This makes reversal indicators more popular than lagging indicators, not just by the download count but also on the internet. Unfortunately, the internet is full of marketing which gives what people want to see, and when something is described as “lagging” it does not sound good. Experienced traders just have clear decision making when picking what tools they need and then test it out to rank the best. They do not pay attention to what the mass wants or think it is good, their benchmark of what is good is their back and forward testing result.

Ratings on indicators do not always come from established professional traders if they are based on the votes of users. If they are based on marketing, it gives us even less reason to pay attention to. You will typically find some comments or ratings on the MetaQuotes site and also on other indicator sources for the MT4/5 platform. These do not mean much to the one on a quest to find a good trend confirmation or exit indicator. Every trading system is unique and adequate to each trader, if a tool does not do a good job to one it does not mean it is bad for yours. Again, if you have decided it can fit your system, test it out, just know a reversal or leading indicator is not the type you want as a trend confirmation indicator.

In our article about trend confirmation indicators, we go deep into how to test and where to find for the MT4 platform. We also mention types and how to spot good ones. Essentially, all of these are lagging and will give you a signal to trade only when there is enough data (historic movements) that fit into their calculations. Now, most people are impatient and can even tweak the setting of such indicators to show too many signals, many of which are false. This tendency is similar when we are attracted to leading, predictive, reversal indicators for the wrong purpose.

Better category names for indicators would probably be reversal and confirmation indicators to avoid bias with the “lagging” word. Similarly to some life events, it is best to decide an action after all is settled, you do not want to make any rash, emotional decisions. Impatience is easily punished in forex, some try to understand why and learn while most just continue to lose or give up. This market will filter the ones who are just expecting an easy way to financial freedom and rewards those who were persistent enough to learn the right way.

Setting your indicator to be reactive instead of confirmative will limit the beneficial effect of having a “lag”, as when you zoom in too much to see a bigger picture. On the other side, a setting that forces the confirmation period too long will give you signals too far between to be useable, as when you zoom out too much to see relevant action. A good example is the popular 200 EMA used by some investor type traders. If you want to be a day trader, stick to timeframes and settings relevant to your needs. A trend trader that has a position open for a few days on average should not be concerned with what happened 200 days before.

Another point with popular tools (reversal indicators) is that they are based on oversold and overbought levels which are by the opinion of most traders, not relevant to forex. Also, when you are using popular tools is means you follow what the masses are doing. The mass effect triggers the attention of the big players on forex – funds, and big banks. Consequently, the price will move in the opposite direction of what most traders follow. This phenomenon is evident when we look at the sentiment tools on the most liquid forex pairs and indexes. Crypto and other alternative markets lack this correlation, as the big players do not have or cannot have an effect on them.

In conclusion, understand that names and ratings do not matter, your testing and system performance with these tools do. You will make an easy selection of what can fit your system well once you get some experience with testing and searching for tools. Know to set up your lagging indicators optimally, test, and find the best setting this way. Lagging indicators will not work well in calm markets without volume, they should be just one element in your system. Reversal or leading indicators are not useless, their role is probably found when looking for an optimal point to exit a trend-following trade. Just do not think there is magic in their predictive nature, even when others say it is amazing.