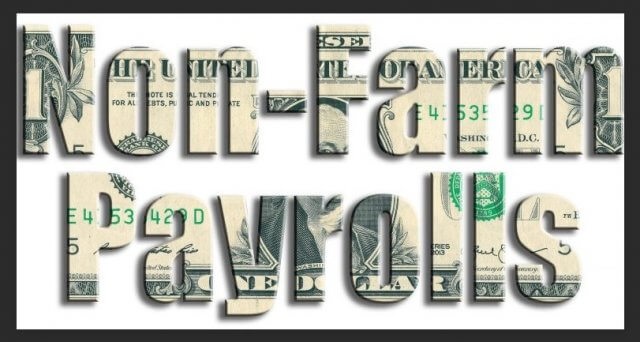 Among all the regular economic announcements published by governments of major world economies, the most important is the US non-farm payroll report (sometimes called simply NFP) which is published by the United States Bureau of Labor Statistics. The market can react rather violently to these reports and there was a time when trading in these ads was a well-known strategy. Today, however, you often see most of the big players remaining out of the market during these ads.

What is the Non-Agricultural Payroll Report?

The non-agricultural payroll announcement is simply the US employment report, which excludes agriculture-related jobs, unincorporated self-employment, nonprofit organizations, and military and intelligence agencies. In other words, it is a report of the “common worker” of the United States. The report is published on the first Friday of each month at 8:30 am EST and summarises the number of jobs created or eliminated from the economy during the previous month. For example, if it is the first Friday of June 2018, the report shows the employment for May 2018. This gives us roughly an idea of how healthy the US economy is, which of course has a big influence on the dollar. News that affects the market

Other central banks also have employment figures, obviously, but Forex traders don’t pay them as much attention as the dollar is the world’s reserve currency. All major Forex pairs are somehow connected to the dollar, so it makes sense that it has a massive influence on the way money flows across international borders.

How the Report Is Broken Down

Beyond simply reporting on how many jobs are created or eliminated, the non-farm payroll report also disaggregates jobs by sector. Some of the sectors include health care, wholesale, retail, transportation and storage, mining, construction, and many more. This will give you an idea not only of how the US economy is growing but also of what specific sectors are growing. This information is also very useful for stockbrokers. For example, if you see that employment in health care is increasing, that means that there should generally be more demand for that sector. A stock trader would seek to buy HMO or some other type of company from the sector in question.

Normally, about a week before the announcement comes out, you will begin to see predictions about the outcome of the announcement. For example, some analysts may expect to create 350,000 jobs by the previous month, while others may have higher or lower expectations. When the ad goes out as expected, it usually doesn’t have much impact on the Forex markets. However, if it veers sharply in either direction, the dollar will generally react quite strongly. This is compounded by the lack of liquidity at the time of the announcement. If you have a broker with floating spreads, you will see that spreads will expand during the announcement because most large funds will be withdrawn

As with almost any other government data, there are many critics out there. For example, the official unemployment rate published by the Bureau of Labour Statistics is known as “U3”. It is calculated by dividing the total labour force by the number of unemployed and multiplying it by 100. One problem is that the US government sees those who are working part-time as employees, regardless of whether they want to find a full-time job. It also sees employees as those who perform at least 15 hours of unpaid family work and those who perform temporary work. To be part of the workforce, he must have been looking for work in the last four weeks. Unfortunately, it does not count those who have “given up” as unemployed, because it does not keep them in the workforce. Most people will consider the “U6” as the most predictive and correct indicator. The U6 indicator is an employment report that includes part-time workers to provide a stronger economic outlook.

Most traders consider the non-agricultural payroll announcement to be the best numbers we have to work with, so the market will pay attention to them. However, in the end, it is not very correct, because, if you look at the data a year later, you would see that they are almost always corrected and revised, usually downwards.

Foreign exchange markets have changed quite dramatically over the past decade and, although the non-farm payroll report remains very important, it is no longer as important as before, mainly because foreign exchange markets are beginning to move on different factors. For example, we are beginning to see that the dollar acts as a security currency more than anything else and traders accept more than the employment situation in several countries (including the US) will be somewhat fluid. Occasionally you get the anomaly of a bad or good month, so keep in mind that most traders are starting to see the non-agricultural payroll report as a trend to follow, not necessarily the cornerstone of indicators to see which currency to trade.