The foreign exchange market has a daily turnover of over $5 trillion, and which has the largest amount of market participants than any other asset class. The forex market has seen continual growth over the years. But it started evolving into what we have now after the advent of the Bretton Woods system, which was a monetary policy where countries agreed to peg their currencies to the US dollar, and where the United States agreed to redeem all dollars for gold. This system collapsed in 1971, which led to the free-floating of currencies on the free market that we see today. 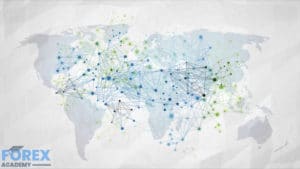 Forex trading platforms began to emerge in the 1990s. However, it wasn’t until the development of the internet, trading software, and the emergence of forex brokers who offered trading on margin, which started the growth of retail trading in the Forex arena.

Foreign or international currency exchange rates display how much one unit of a currency can be exchanged for another currency. Typically, exchange rates float up or down and where the value of one currency against another is traded based on a multitude of factors, including the strength or weakness of an economy, interest rates, gross domestic product, and political factors, including war. Currencies can also be fixed to another, in which case they still float. However, they move in tandem with the currency to which they are pegged.

All currencies are traded in pairs, and where traders simply look for the strength of one currency against the weakness of another in order to make profitable trades. While this is not the easiest thing to achieve in such a volatile market as foreign exchange, software trading platforms that offer great technical analysis tools, where the study of recurring chart patterns on screens, has completely changed the dynamics of trading within this asset class. And so, technical analysis trading has driven the exponential growth of the Forex market.
The types of people who trade the forex market are hedge funds, asset managers, central banks, sovereign wealth funds, financial institutions including currency speculators, and retail traders who all try to make potential profits from currency fluctuations relating to the global economy. 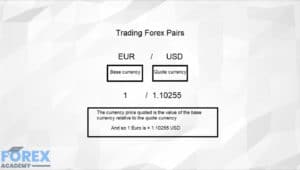 In the example ‘A,’ we can see how the Euro is quoted first against the USD because one Euro has a greater value than one US dollar, in which case it is quoted as the base currency against the quote currency. The same applies for all currencies.

Although it is common sense to believe that, for example, a country such as the United States, with all its wealth and power, has a much greater financial foothold over countries such as New Zealand, or Australia and Japan, there is almost an unquantifiable amount of economic variables that formulate the value of one currency against another. And this is why you’ll find one of the idiosyncrasies in the Forex marketplace, where holders of United States dollars might quickly sell those in order to buy the Yen, Australian and New Zealand dollars, simply based on rumors, speculation, and chart patterns. It is because of this that the forex is the most volatile of all asset classes with constant price movement. 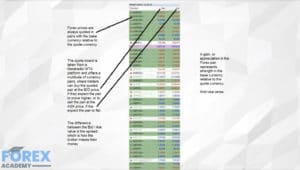 Example ‘B’ is a market watch price board showing many currency pairs and where the fluctuating exchange rates are expressed as bid and ask. If a trailer believes a particular pair is going to go, they will

accept the bid price and execute that rate on their trading terminal, and if they think that the value of the exchange rate is going to go down, or depreciate, they will accept the price as quoted on the ask section of their trading platform 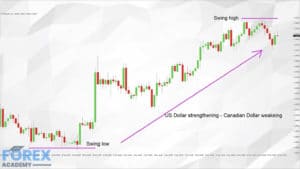 Example ‘C’ is a screen chart of the USDCAD pair on a four-hour time frame. Traders look for patterns on their screens, such as swing highs and swing lows, in order to try and gauge the strength of one currency against another. And therefore in this chart, we can see that after a swing low the US dollar began strengthening against the Canadian dollar, all the way up to the swing high, where it met some resistance, and then the Canadian dollar began to strengthen against the US dollar as price retreated away from the swing high.

When trading in the currency markets, traders buy one currency and sell the other. In our example, traders began buying the US dollar and selling the Canadian dollar when price moved up and away from the swing low and where this continued all the way up to the swing high.

Traders choose the forex market because there is so much activity. There are many currency pairs, and because the market is often extremely volatile, it presents many trading opportunities. And because of the continual change in the economic circumstances of countries, and the continual newsflow pertaining to economic data, this market has become the most liquid of all asset classes. And because of tight spreads and cheap execution relating to trading within the forex market and the small outlays in capital, which is needed to fund a trading account, it makes absolute sense to consider Forex trading as a great business opportunity.