A retail trader’s insight into how bankers trade Forex

In this session, we will give retail traders some insight into how professional bankers trade forex, with their own bank’s money, in the forex market.

Wouldn’t it be absolutely fantastic if everybody traded forex the same way?  But of course, that is not the case because traders use different time frames, have different opinions about where currency exchange rates should be, they have different views on political and economic situations which will affect forex exchange rates, and this dynamic array of variances makes Forex moves very difficult to predict on a long-term basis.  Situations can change in the blink of an eye and cause price action moves and reversals, which nobody could have foreseen.

However, if retail traders knew what was going on behind the scenes at a major investment bank, might it give them a better understanding of how price action is affected by the big guns’ actions?  Well, yes, it would.

Firstly, it is he said that under 10% of bank traders’ own banks’ funds, accounts for 90% of all forex volumes. The best way to explain this is to say that the average forex retail trader probably trades between a couple of dollars per pip, with larger account balance traders ramping their trades up to $10 or a standard lot, equivalent, and perhaps a little more when risk suits. And now factor in the fact that over 75% of retail traders lose all of their money in the first 6 months of trading.

And now, let’s look at bankers. The majority of their trading is for their corporate or high net worth client base, where they instigate forex trades on those client’s behalf. And where some of these trades are speculative, and some of these trades are because of clients doing business in other currencies abroad, or perhaps hedging against inflation or portfolios or fluctuating exchange rates, etc.

But when the bankers themselves come to trade, these guys do not mess about. They are likely to instigate a spot or forward Forex trade in ticket sizes ranging from $10 million up to $500 million.  And in which case, they are certainly not picking their trades on a whim. They do not scalp, and they do not go long or short because a stochastic is overbought or oversold, or because an RSI has reached a particular area, or because a Fibonacci retracement to X, Y, or Z level has occurred.

Professional bank traders have a dedicated team behind them who are professional analysts and economists advising them. They have a defined fundamental and technical view of where an exchange rate should be and where reversals in price action might occur, and they tend to be swing traders, not intraday traders, and they usually only do a couple of trades a week on their own bank’s book. But how do they choose their levels?

You definitely will not find something like this one hour chart of the EURUSD pair on a professional bank trader’s screen, which is cluttered with lagging indicators.

However, you probably would find something like this daily EURUSD chart. But what are they looking at? What information does such a chart provide them?

Actually, it provides them with a wealth of information, such as here we have added some notes, including at position A , which shows defined lines of resistance and support, in a wedge-shaped formation, where a bullish breakout occurs.

And at position B, where price reverses 300 pips from the key 1.200 level, before forming a support line and where the price is moving higher, potentially retesting that key level again. 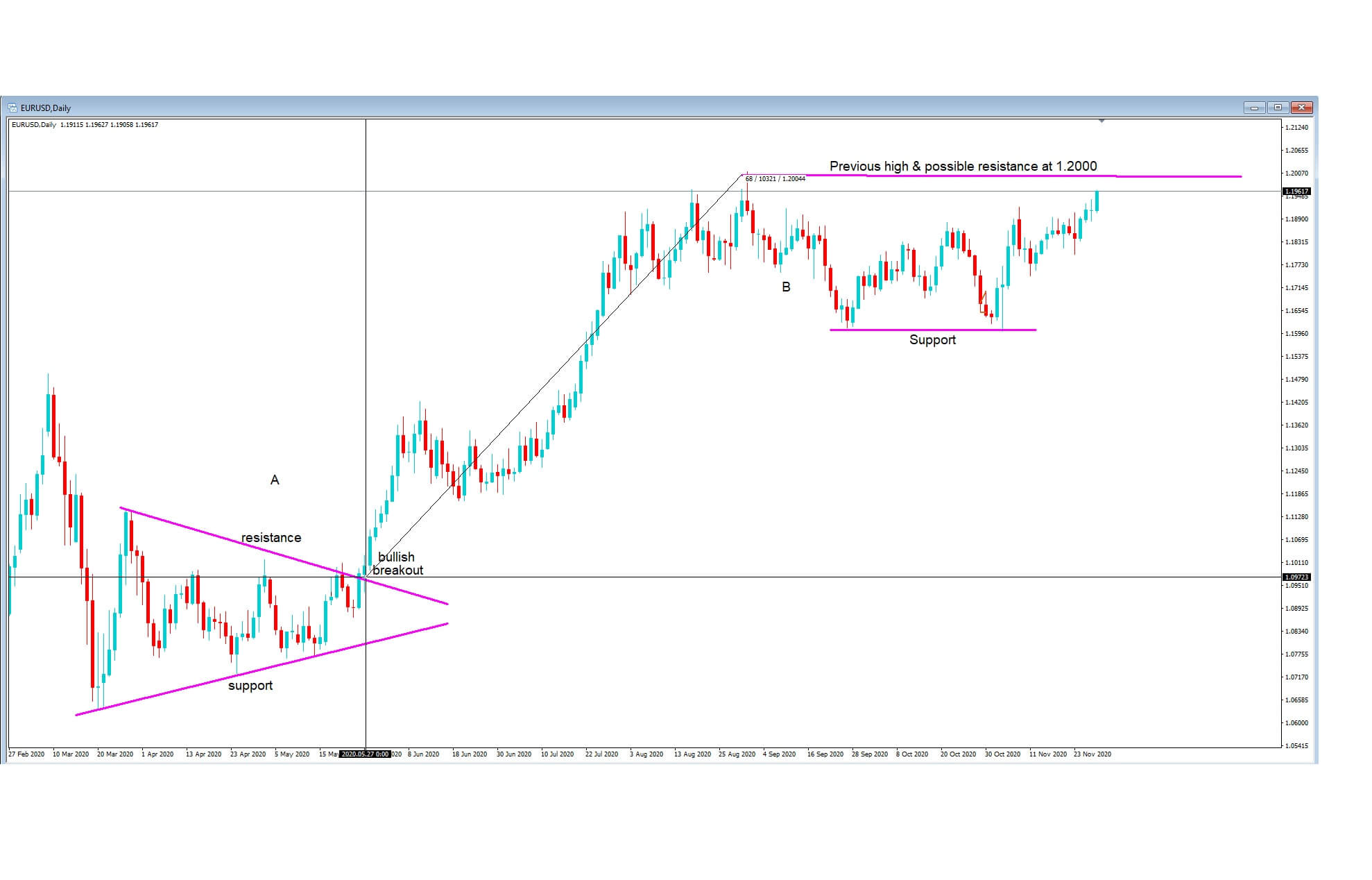 Now, if our professional bank traders bought this pair at the breakout from position A and rode that trade up to the peak at position B, they would have made 1000 pips on that trade, on a multimillion Euro – in this case – ticket size. The profits would have been incredible.

Therefore, we know that professional bank traders take a longer-term view of the market. They enter with large size ticket trades, and they use a minimal amount of technical analysis indicators, preferring to draw their own trendlines while looking for breakouts and concentrating heavily on key numbers for support and resistance.

While bankers have deep pockets in terms of how much exposure they have with regard to stop losses, it is almost impossible for a retail trader to incorporate the same amount of risk into their trades.  However, if a retail trader understands where these large ticket trades are occurring, it could be beneficial in terms of their own trading setups.

In conclusion, no matter what your trading style is, look at the longer time frames and look at key areas of support and resistance, which is the institutional size traders maybe referring to, in order to better select your trades on the lower time frames.