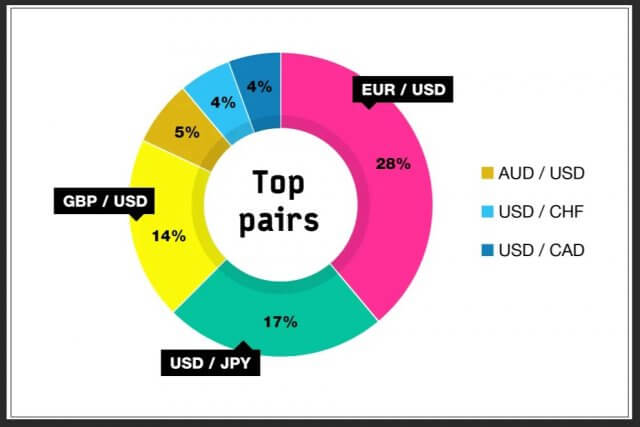 One of the most common mistakes made by some Forex traders is not to understand that, correctly deciding with which pairs to make trades, and in which direction, is 90% of the battle to make profits. Unfortunately, many traders focus on trying to perfect the entry methods, not realizing that if you pick correctly what you’re going to upload today, for example, then the exact input method used will not cause a noticeable difference in your trading results. You can become an expert in selecting entries in the 5-minute chart, but if you do not choose with which to trade with a broader perspective, and in the longer term, will be of little use to you. Why do some traders frequently make this mistake, and how can they choose the currency pair with each day in a smarter way?

Why Traders Do Not Consider Pair Selection Carefully

Most traders are eager to start making a lot of money. The way to make a lot of money quickly, as they are told, is trading with shorter deadlines – this is true, at least in theory. Traders realize that some currency pairs have lower spreads (such as EUR/USD) and think they should choose those low spread pairs to make trades and save costs. Another very common reasoning is that it makes sense to trade with currency pairs that are most active during the trader’s preferred trading hours. An additional argument says that each currency pair has its own “personality” and one must gain a lot of trading experience with few pairs to get to know their personalities, and thus make trades more successful.

These considerations are rational and true, at least to some extent. The problem is that they are far from being the most important consideration that should influence the choice of currency pairs for trades. I learned this a few years ago when I decided I would do full-time trades focusing on the EUR/USD and GBP/USD pairs. For several months, these two pairs barely moved, while USD/JPY took off like a rocket and provided easy money to anyone who made trades with it. Of course, I knew very well the personalities of EUR/USD and GBP/USD, I had a great strategy that had worked very well in these pairs for years, and their busiest hours fit precisely in the time zone of my geographical location. Despite all this, my linear thinking made me miss the only real trading opportunities of 2012, which came in pairs and crosses of JPY.

Factor #1 – To Decide Which Pair(s) To Make Trades With

So how should one decide with which currency pair or pairs to trade? I’m going to use an analogy with the gaming world to simplify the subject: Let’s say you go to a casino to play a game where you need other players to risk money at the table to give you the chance to make a profit, I mean, your profits will come from your losses. This is a good comparison with the Forex market, which works the same way. So, which table would you go to? The busiest, with more players and more money at the table, or a quiet one on The corner with just a couple of players? Normally, it would make more sense to choose the table with more players. So why trade in foreign exchange be different? What you want is to be doing trades with the “busiest” currencies at any given time, you want to be where the stock is. Is there any way to determine that? Well, you could try reading the financial news to spot the biggest things that are happening on the market at any time. There is a place for that, but there are easier ways that can tell you where to start focusing your search.

Although Forex trading does not have reliable centralized volume data, there are reliable statistics that tell us that currencies participate in more trades, that is, that currencies are exchanged in larger volumes. Most importantly, today, about 70% of all Forex trades are made between the US dollar, the euro, and the Japanese yen. The pound sterling and the Australian dollar represent a further 10 percent. The US dollar is by far the most dominant of all these currencies, so it is quite reasonable to focus on each of the other currencies against the US dollar. You don’t need to open the trading platform and worry about 80 pairs and crosses or wonder if the Canadian dollar/ Swiss franc is what you should include in your trades today. It’s almost certainly not, and if you ever hear someone telling you about a level of support or resistance in a couple of currencies like that, it’s good to ignore that person – no one is looking at that pair or their levels!

Now that you know it’s only worth looking at a few currency pairs, you’ll find it much easier to know which ones participate in trades any day. The method to be used to answer this question is to answer which of these currency pairs is likely to have the highest volatility? It needs volatility, because if the price doesn’t move, how is it going to make money? It is almost mandatory to buy and sell at the biggest price differences you can find, to receive the highest possible profits. There are some ways to predict where market volatility is likely to be, and if you apply the methods I describe below, you should get some good answers.

The first thing we need to find out is that by statistic, in the markets, volatility is “clustered”. Suppose that the average daily range of a currency pair is a movement of 1% of its value, taken over several days. Suddenly, one day it moves 3% of its value. Volatility clustering research conducted by data scientists like Benoit Mandelbrot tells us that this pair is likely to move by just over 1% tomorrow, most likely actually by about 3%. Therefore, when a currency pair is seen to move for more than its average volatility, that high volatility is more likely to continue to be reversed in the short term. Another method we can use is to calculate the average real range (ATR) of the last 5 or 10 days for GBP/USD, EUR/USD, and USD/JPY and to calculate these values as percentages of the price of each pair from the beginning of the period. Whoever has the greatest value, is probably the pair on which it makes sense to focus tomorrow.

Another crucial factor is the trend, or impulse (they are essentially the same thing). Major currencies, such as the US dollar, the euro, and the Japanese yen, have shown in recent years a greater likelihood of moving in the direction of their long-term trends. A good rule of thumb in trading major currency pairs is to ask is What is the lowest or highest price than 3 and 6 months ago? and make trades in most or in full in the same direction as any long-term movement, if any.

If you trade only in the course of Asian trading hours, you are likely to find that your best chances will involve Asian currencies such as the Japanese yen and the Australian dollar. It is advisable to consider whether one can develop a method to do trades on longer time horizons, as otherwise, one could be missing out on other opportunities while asleep, just as I missed out on opportunities in USD/JPY in 2012. If I had the wisdom to trade with the daily graphics at that time, I could have taken advantage of that great move in the Yen very easily, even at night while I was asleep, with the traders in Tokyo doing the heavy lifting for me!

Finally, if you look at an economic calendar to see when major central bank announcements or the most important economic data for major currencies are scheduled, you can see that if you are in a trade before those releases, They could give you the volatility that is necessary to transform your trade into a big winner, or at least show you where volatility is most likely to appear.

Therefore, it is good to limit one’s approach to major pairs and to make trades with currencies that show the greatest volatility, and see where are the greatest trends in the long run. This will give you the optimal opportunities to be profitable in Forex trading.