US stock indices – Bad news is the new good news!

In this session we will be looking at us stock indices,  and trying to reason why they are at record highs when the US economy is faltering due to the ongoing coronavirus pandemic. 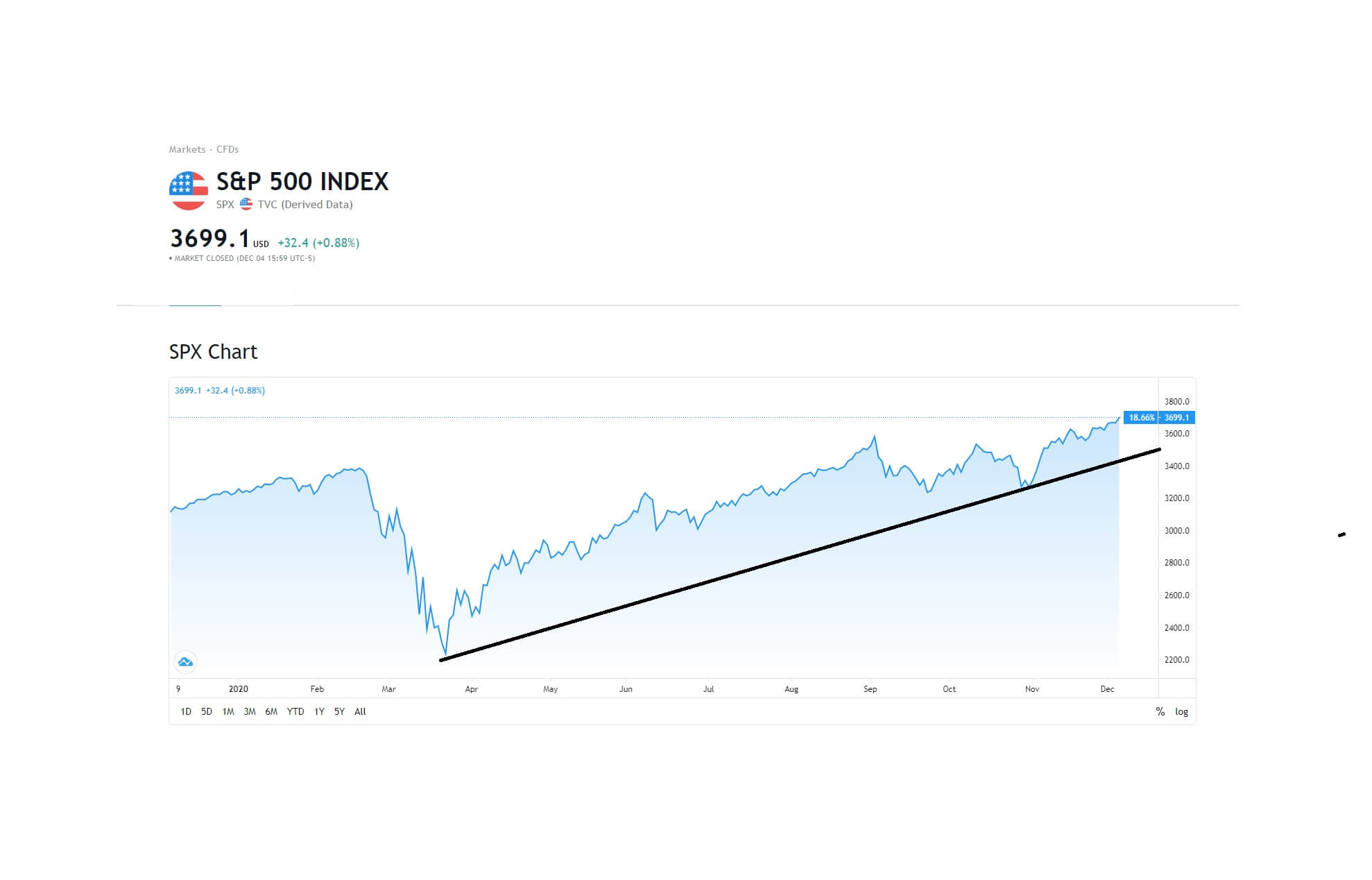 This is a chart of the S&P 500 index which measures the stock performance of 500 of the largest companies listed on the United States stock exchanges it is a commonly follow equity index.

On Friday the 4th of December 2020 the index rose to an all-time record high currently sitting at 3699.  Remarkable considering the unit United States is still in the grip of the coronavirus pandemic and where hospitals are currently overrun with victims of the disease across the United States, and especially New York and California, where ICU capacity is down to just 15%, and where the governor of California has recently said he expects large areas of the state of California to be locked down within the next few days affecting businesses and individuals’ livelihoods. 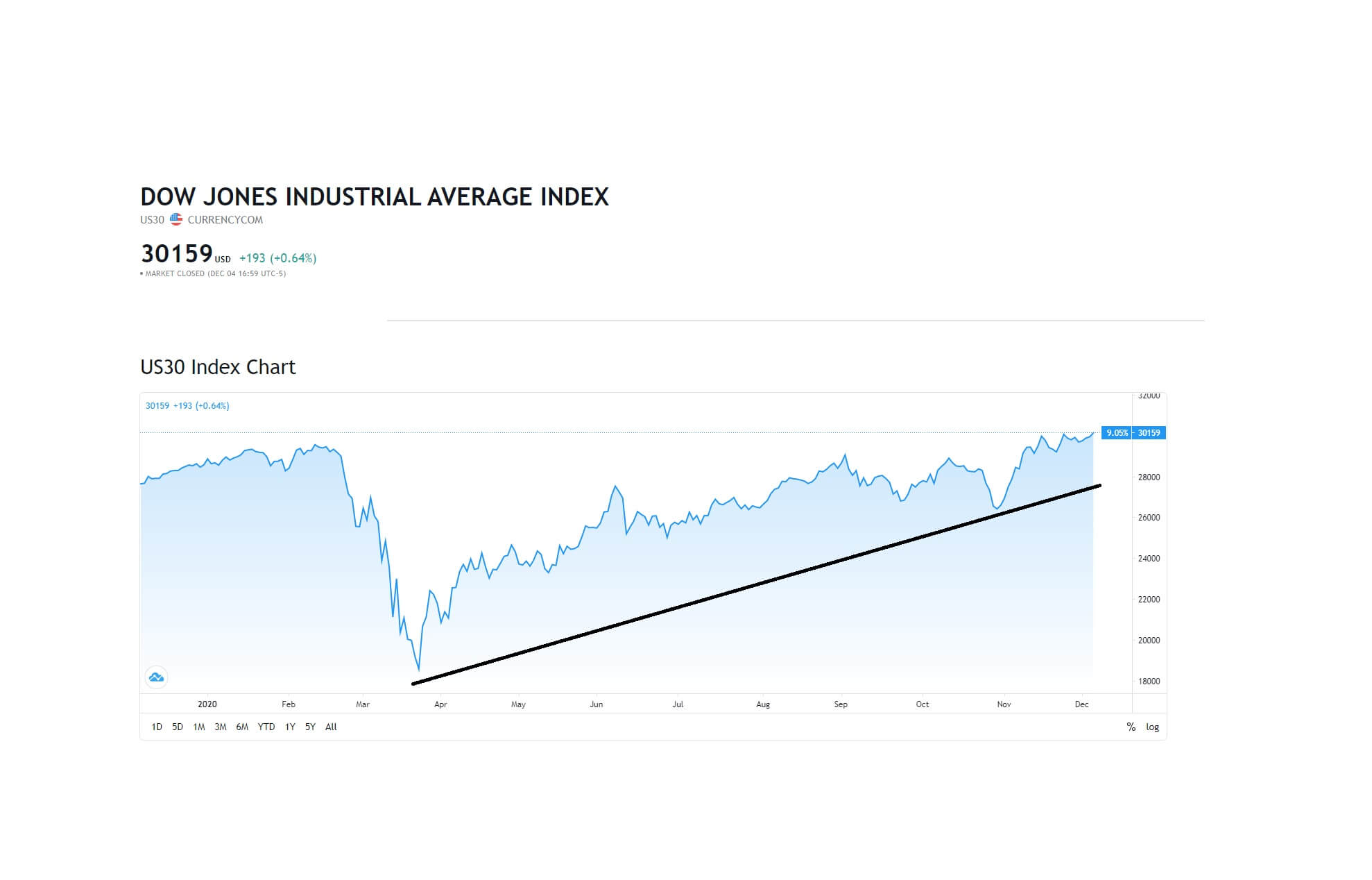 In an almost identical trajectory since march the Dow Jones industrial average index has also reached record highs and is holding ground above the key 30,000 level.  This is simply staggering bearing in mind millions of people are still unemployed and gross domestic product and have a key indicators show that the American economy is not showing a V-shaped recovery, as was expected and hoped for by the federal reserve. 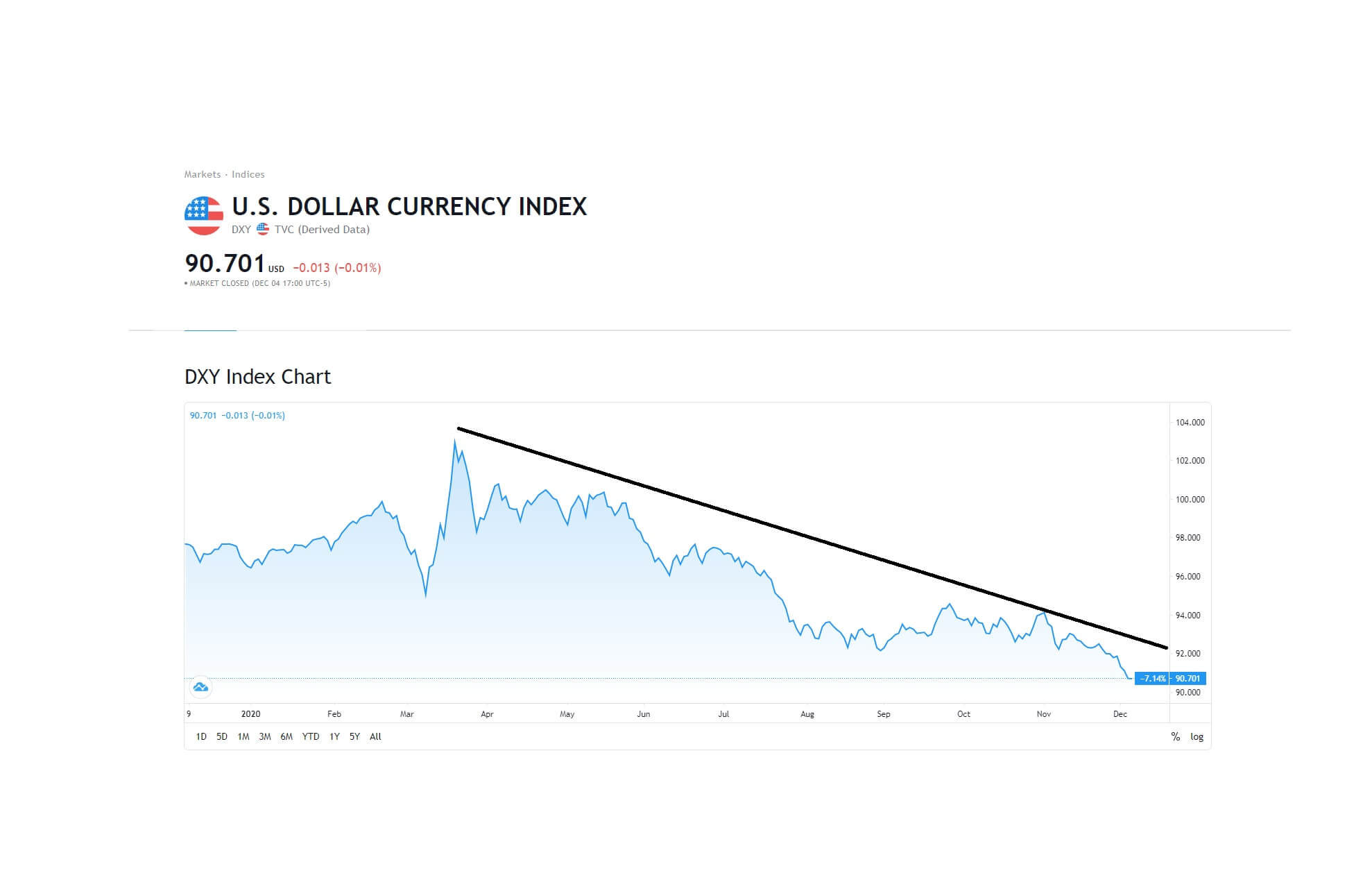 Conversely the US dollar index, or DXY, which is a weighted index against major currencies including the euro, British pound, and yen, over the same period since the middle of march 2020 has been falling from its peak of 103.00, to 90.7 at the time of writing.

Traders have been using the dollar index as any inversely correlated technical analysis tool in particular when trading the Dow Jones 30 industrial average.

One of the reasons for this is that as the federal reserve pour billions of dollars into the system many of these are being used by institutions, traders, speculators and investors to buy stocks and shares in the hope that the US economy will quickly recover once the pandemic is under control within the United States and things revert to normal, and where history tells us that many stock indices go on to recover over 10% of their market value following previous pandemics, including Sars, and asian bird flu.

It was no coincidence that these levels were reached after the November us non farm payroll where the unemployment rate fell to 6.7% from 6.9% and where 245,000 jobs were added, and although just year ago these types of numbers would have been seen as fantastic for the American economy,  the November key jobs report, where analyst expectations were  for over 600,000 jobs to have been added, was seen as disappointing.

And so while the US economy looks to be stalling and payroll numbers are weak and yet there is such optimism by investors which is keeping the US stock market buoyant. So what is going on what is really behind this?  Certainly, the US dollar seems to be reflective of the poor state of affairs with the United States economy.  And as previously alluded to, some of these dollars are finding their way back into the stock market, even though some major American corporations are lagging. The news that the covid vaccine will soon be rolled out across the globe has encouraged investors, but the truth may be that the market is expecting that the woeful economic data will simply force congress to quickly pass a stimulus bill before the Christmas break, and this would effectively prop up the American economy providing a much-needed lifeline for workers and businesses and where some of the anticipated $900 billion being talked about as a potential amount which could be agreed by both the democrats and republicans would likely maintain the buoyancy in the stock markets. The flip side of the stimulus is that on a supply and demand basis the influx of dollars will likely weigh on the dollar index providing counter currencies such as the Euro, Canadian dollar and the Australian and New Zealand dollars a lift.