Dow Jones 30 Industrial index pulls from historic highs. Where next?

In this session, we will be looking at the potential directional bias for the United States Dow Jones 30 industrial index, which has recently hit a historic high. 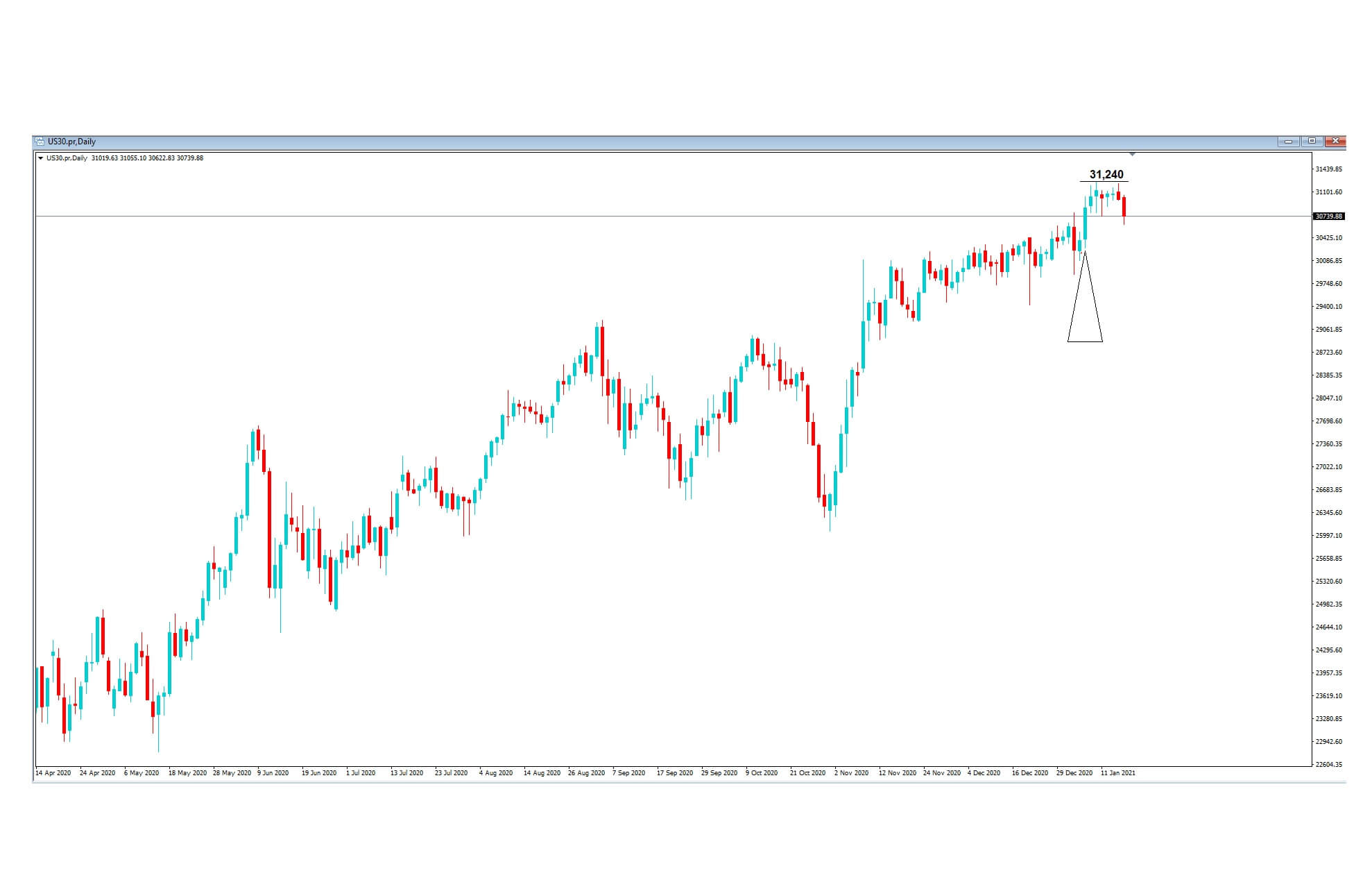 On the 6th of January 2021, the United States capitol riot shocked the world. The United States Congress insurrection was carried out by a mob of Donald Trump’s supporters in an attempt to overturn his defeat of the 2020 presidential election.

While the world’s media focused on the attack of the most advanced political system in the world, which was viewed by billions of people across the globe in utter shock and disbelief, and where 5 souls, including a police officer, lost their lives in the riot, the Dow Jones 30 industrial index, in a somewhat unexpected move, aggressively turned bid, and subsequently went on to reach an all-time record high around the 31,200 level.

The bull run has largely been a continuation of the 18,000 low reversal in March when the pandemic began to bite the US economy and caused the shock collapse from its recent 29,500 record-breaking pre-pandemic high.

Much of the pre-pandemic record-breaking high on us stock indices, including the Dow Jones 30, can be attributed to the Trump administration’s policies of low taxation for corporations and less red tape for them. Indeed, had it not been for the pandemic, President Trump may well have gone down as one of the best presidents ever in terms of revitalising the United States economy, where it also so reached a record number of US citizens in employment.

However, with Trump and the republican party on the way out, and with Biden and democratic about to take office on the 20th of January, 2021, the incredible amounts of money which have been thrown at the US economy to prop it up during the pandemic from the coffers of the United States treasury department,  must be repaid,  and where president-elect, Joe Biden has made it quite clear, during his campaigning, that he intends to raise corporate taxation in order to find some of the money, and where he will also reverse policies of the previous government,  such as low red tape requirements for businesses.

In which case, there is an obvious conflict, whereby one government’s policies caused Dow Jones to be at a record high and where the incoming party is about to reverse the policies which caused the record run, which will likely cause pressure on those businesses, which will have less profit due to higher taxation, in which case the stock market should reverse its winning streak? So why the continued bull run on stocks?

This can largely be put down to positioning.  Where hedge funds, banks, investors, and other financial institutions are preparing themselves for a potential future shock by driving stock indices higher before any such new legislation will cause a likely negative impact on stocks.

Quite often, investors will position themselves for future shocks by driving an asset higher, in anticipation of a future correction lower, – or the other way – which on a fundamental economic basis, in this scenario, should be the way forward if such policies of higher taxation were introduced. More tax equals less profit, equals lower dividends for investors, and lower corporate valuation. 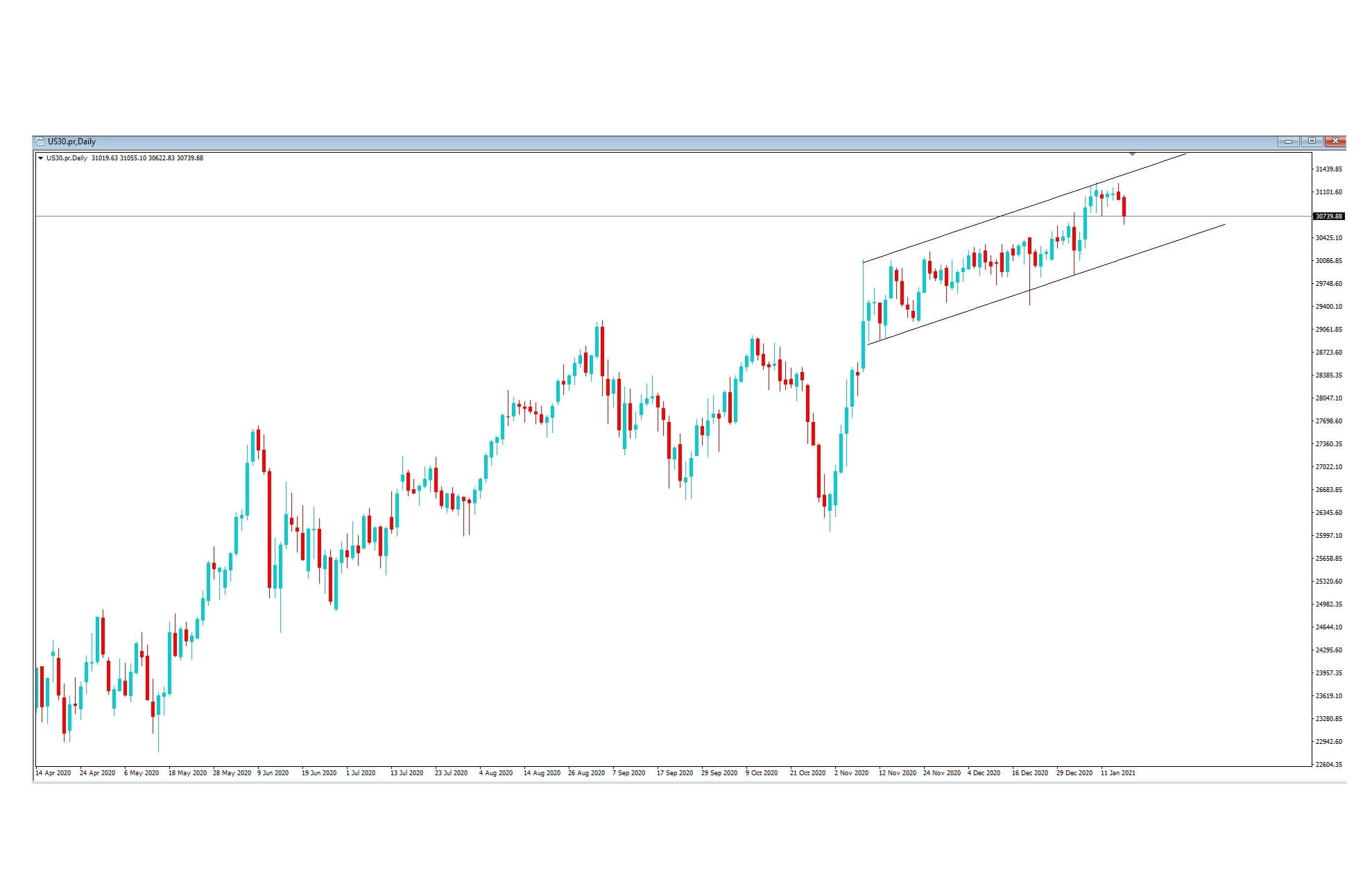 We still have a few days to go and until the inauguration, and then there is the Donald Trump impeachment, which may cause a delay in the democratic party’s policy implementation, and, as shown here on the daily chart for the Dow Jones 30 index, it is still in a confirmed bull trend, in which case traders will be looking for breaches of the support and resistance lines as shown here, while eagerly waiting for any new policy changes by the incoming Democratic administration.

One thing is certain, there will be continued volatility in the financial markets as the fallout from the pandemic continues to cause turbulence and where recent data confirms higher unemployment and less consumer spending in the USA, which are more possible reasons for the fall in the index from its recent high, and worries about the change in government and policies.