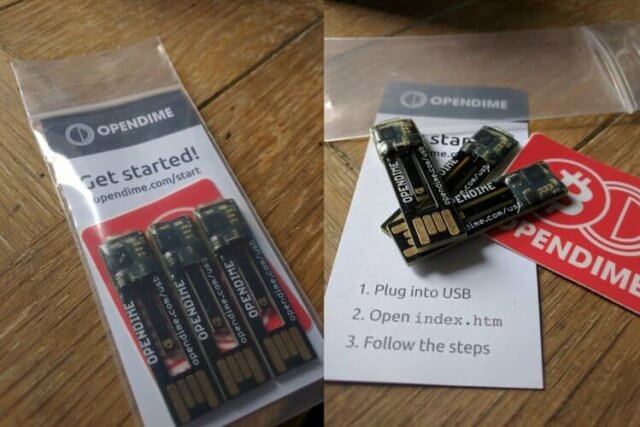 On their website, Opendime is referred to as the “World’s First Bitcoin Credit stick wallet.” The highly innovative and minimalistic USB stick allows users to load Bitcoins onto the wallet and physically pass them to other users multiple times. It deviates from the traditional security protocols used by both software and hardware wallets.

For instance, it does not need to be secured with a PIN, and neither does its contents need to be encrypted. And unlike most other crypto hardware wallets, Opendime doesn’t have a screen or transaction confirmation buttons. Rather, you have to connect it to your computer to check crypto balances.

In this review, we want to determine if the Opendime hardware wallet is indeed the most secure Bitcoin vault yet. And to answer this, we explore different aspects of the wallet, including its ease of use, set up process, pros, and cons, and also compare it with other hardware wallets.

But first, we look at how Opndime works.

Like most other hardware wallets, Opendime is a USB-like device that’s specially designed to store Bitcoins. Every time you order Opendime, you will receive a set of three single-use wallets. Single-use here implies that you can only draw coins from the wallet once. After receiving the wallet, you can add as many bitcoins for as long as possible. But to access these coins, you need to break the special seal on the device.

Highly versatile wallet: Opendime is a highly versatile and easy to use hardware wallet. It is compatible with a computer, laptop, or even a phone. Simply plug it into either of these devices to initiate the setup process, check balances, or withdraw the bitcoins stored therein.

Free to use: When using the standard hardware or software wallet, you are often required to send bitcoins over the blockchain network. The process isn’t just time-consuming, but you also have to pay network fees for the online transaction. When using Opendime, you can copy coins from one wallet and transfer them to another, physically, without incurring the Bitcoin network fees. You also don’t have to wait for hours on end to have your transactions processed.

Bitcoin-specific: This implies that unlike most other hardware wallets like Trezor or Ledger Nano S that host thousands of cryptocurrencies and tokens, Opendime can only support Bitcoins.

Keys are generated by the device: Your Opendime wallet will automatically generate the private and public wallet keys as well as your address QR code. These unique wallet identifiers are created as soon as you plug your device into a computer and are highly randomized to eliminate duplicity.

No access to private keys: After the private wallet address is generated, it is stored within the device. Not even the wallet owner can view the private address without having to break the wallet’s seal.

Tamper proof: According to Opendime creators, Coinkike.inc, it is impossible to tamper or duplicate these hardware wallets. They argue that the wallet is designed using proprietary technology, where each chip contains a unique factory key that is impossible to peel or replace.

How to set up the Opendime bitcoin wallet

Step 1: After receiving the three Opendime wallets, connect the one you wish to use immediately to a computer. Red and green lights will flash on the device.

Step 2: On your preferred browser search for Index.htm. You will receive a notification stating that the ‘wallet has never been used.’

Step 3: Agree to the Opendime wallet manufacturer’s terms and conditions to start the wallet activation process.

Step 4: On your computer, open the index file associated with the hardware wallet (found under /Volumes/OPENDIME) and upload a photo or any file of at least 256kb.

Step 5: Once the wallet detects the file, the flashing light will turn green

Step 6: Now reload the Index.htm page on your browser to generate and reveal your wallet’s public address

Step 1: Plug in the Opendime wallet into a computer and open the index.htm page on a browser.

Step 2: Click on the ‘Your Bitcoin Receiving Address’ tab to reveal your wallet addresses.

Step 3: Copy the address and send it to the individual sending you Bitcoins.

Step 4: Wait for the coins to reflect on your Opendime wallet.

How to send funds from Opendime wallet

Step 2: Break the wallets seal after which the private wallet address will display on the browser page

Step 3: Click on the ‘Send to any Address’ icon to initiate the transfer.

Step 4: Key in the recipient’s wallet address and hit send

Opendime wallet ease of use

Opendime has a straightforward setup process. Plugin the wallet device into a computer/laptop/phone and initiate the wallet activation process by opening the Index.htm URL page on your browser. This gives you access to the device’s public wallet address.

Both the wallet and its website are also multi-lingual, supporting over seven international languages.

Opendime wallets are available in a pack of three and are currently sold for $49.94 (approximately $17 per wallet).

Given that Opendime is not a transactional wallet, you will not have to worry about the transaction fees. The wallet’s portability also means that you can bypass the bitcoin blockchain fees altogether by moving the physical keys on the wallet as opposed to sending them over the network.

What are the pros and cons of using Opendime bitcoin hardware wallet?

Comparing Opendime to other hardware wallets

The only similarity between Opendime and Ledger Nano S is the fact that they are both crypto hardware wallets that support Bitcoin. Other than that, they adopt highly diverse security approaches to keeping your private keys they hold safe.

While Opendime only has one layer of protection over a client’s private keys, Ledger Nano S embraces a multi-layered security approach. Opendime keeps the coins safe by hiding the private keys from everyone, including the owner, while Ledger Nano S encrypts these keys before burying them under a password and recovery seed.

Verdict: Is it the safest hardware wallet yet?

Opendime hardware wallet is tamper-proof, it stores your private keys offline, and doesn’t reveal your private wallet address. These make it one of the most secure physical bitcoin vaults. There nonetheless, are several drawbacks to using the crypto wallet. For instance, it is not password-protected, and it does not have a backup or recovery option. Therefore, should the wallet be lost, misplaced, or destroyed, you have no way of recovering your digital assets.