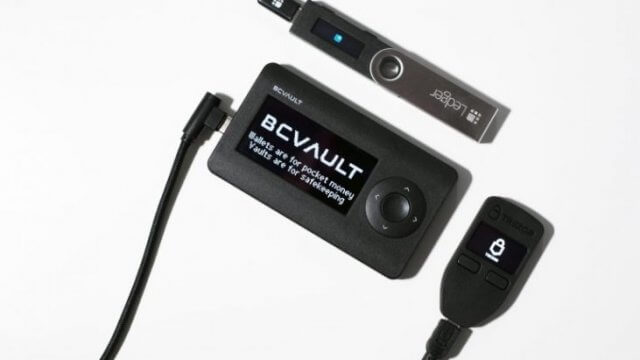 For instance, instead of recovery seeds, the wallet presents its users with 4-layer security passwords. Similarly, instead of relying on the hierarchical deterministic protocol used in generating new secure wallet addresses, BC Vault adopts the non-deterministic security protocol.

In this BC Vault review, we will be exploring the different operational and security features that help BC Vault stand out of the crowd. We will look at its key features, security features, ease of use, customer support, compare it to other hardware/software wallets and everything else you need to know about the Bitcoin wallet.

We start with key operational features:

The hardware is specially designed with a 2.42-inch OLED that features a 128×64-pixel white-on-black display. The screen is large enough to fit all details of a crypto transaction, including the recipient’s addresses, fees, crypto amount, and the wallet name.

BC Vault is the truest form of a multi-signature hardware wallet as it allows you to create 2000+ individual wallets. Additionally, the wallet makes it possible for you to create highly unique multi-character passwords for each of these wallets, making it possible to share the device between two or more persons.

Like most other hardware wallets, BC Vault has to be paired with a desktop app or browser extension. But unlike most other wallets that will only support a limited number of browsers or operating systems. BC Vault is highly versatile.

According to the BC Vault website, the company currently supports up to 30 cryptocurrencies and tokens. These include all the popular cryptos like Bitcoin, Ethreum, Litecoin, Dogecoin, Ripple, Bitcoin Cash, Litecoin, Bitcoin Gold, Ethreum Classic, all ERC-20 tokens. And with every successive upgrade, the wallet developers promise to add even more coins and tokens.

The hardware wallet enables the use of cryptocurrencies in multiple wallets all in a single app. It supports native storage of ERC-20 tokens and does not rely on websites or third-party applications. Users can comfortably manage BCH, LTC, BNB, DASH, and many more supported currencies.

BC Vault uses a Random Number Generator (RNG) to create more than 2000 independent and non-deterministic crypto wallets. What’s more, each key is generated independently, which also means that keys are not mathematically linked.

All its private keys are stored in specialized storage known as FRAM. They are 1000x faster and consume 250x less power. Apart from that, the hardware is designed with a security chip to prevent the exposure of users’ wallets to hackers or malicious malware.

The fact that wallets on the hardware device are generated independently enhances its anonymity. Additionally, BC Vault does not have a serial number to ensure complete anonymity of its users’ wallets.

Also known as the bounty wallet, this hardware integrates quite a strong encryption. Private keys correspond to a specific public address in each BC Vault.

In addition to the passwords, every aspect of the BC Vault hardware wallet is highly encrypted, especially the private keys, your personal data, and the wallet addresses.

While most crypto hardware wallets available today have recovery seed that one can use to recover private keys if their device is compromised, BC Vault presents you with a 1GB SD Card. It is highly encrypted and provides you with more than enough room for backing up your private keys.

BC Vault touts its wallet as being the most secure cryptocurrency hardware wallet. As a guarantee, the wallet developers have placed a 1BTC price for anyone who will be able to crack the wallet’s encryption.

The compact design of the wallet’s hardware ensures that the user will always know when their device has been opened up. Additionally, the software/firmware technology applied in proprietary and not open-sourced, which means a hacker would have to undertake the painstakingly long and tedious process of reverse-engineering the system if they were to carry out a successful hack.

How to set up and activate the BC Vault wallet

Step 1: Plug in the device to your laptop or desktop

For the device to be operational, you have to plug it to a desktop or computer. It has a long connectional cable, which means that you can use it while still connected to the laptop.

Step 2: Shake the device to generate a random number

To generate a wallet address, you are required to shake the device for about two minutes. This is a security safeguard and the non-deterministic form of generating wallet addresses.

After generating the wallet, open the BC Vault official website and download the BC Vault app and link it to your device and the newly-created address. The app is compatible with Windows, macOS, and Linux Operating systems.

After going through all the above steps, you will be required to set a unique 8-character global password or PIN before you can be allowed to use your BC Vault. It is a fundamental security feature that will be used every time you need to access your BC Vault or application.

Now that you have set your PIN, you need to create a wallet and transfer some crypto funds. You can deposit into your new wallet from another wallet, from an exchange, or by converting your fiat currency via such third party fiat-to-crypto conversion sites like Simplex or Changelly.

Step 6: Use your BC Vault

Now your BC Vault crypto hardware wallet is all set and ready for use.

How to add/receive into your BC vault hardware wallet

Step 1: Start by logging into your wallet device and application, and clicking on the ‘Add New Currency’ tab.

Step 3: Copy the wallet address and send it to the party from whom you wish to receive the cryptos or have them scan your address QR Code.

Step 4: Wait for the coins/tokens to reflect in your wallet.

Step 5: Back up your wallet using the SD Card as soon as you add these cryptos into the wallet. Keep in mind that the wallet does not have a cloud backup, and you, therefore, need to backup your wallet on to the SD card every time you load new crypto.

How to Send Funds with Your BC Hardware Wallet

Step 1: Start by launching the BC Vault app and connecting the hardware device

Step 2: Tap on the ‘Send’ icon and click on the cryptocurrency you wish to send.

Step 3: In the pop-up window that appears, key in the recipient’s wallet address and the amount of crypto you wish to send

Step 4: Confirm that the crypto amounts and the wallet address are safe and hit send.

BC Vault wallet costs and fees:

There are currently three models of the BC Vault hardware wallet. The Legendary BC Vault One costs $155, the limited edition of both BC Vault Quicksilver, and BC Vault Gunmetal vaults cost $260. They all have similar specifications safe for Quicksilver and Gunmetal wallets whose casings are made from brushed aluminum and aircraft-grade aluminum, respectively.

Storing your digital assets in the sturdy hardware wallet is free. But you will have to part with variable transaction fees every time you send cryptocurrencies to another wallet or exchange. The amounts charged will depend on the transaction volume and the type of crypto and will go to blockchain miners.

BC Vault has one of the most elaborate FAQ pages. This section of their website addresses all of the most common challenges by the hardware wallet users. It features both quick-start guides and video tutorials on how to interact with the hardware device. For more personalized queries, however, you may contact the BC Vault hardware wallet developers via email: support@bc-vault.com  or on their different social media pages.

What are the Pros and Cons of BC Vault Hardware Wallet

How Does Bitcoin Hardware Wallet Compare with Other Wallets?

Unlike Ledger Nano S or Trezor, BC Vault utilizes an encrypted backup and a global password or PIN instead of an unencrypted BIP39/44 seed phrase in its security. Users can also back up their funds externally on a wallet data on an SD.

Further, they can also use an encrypted wallet data to print out a series of QR codes. The majority of their competitors use hierarchical deterministic wallets, which also means that addresses used can be traced back to the seed.

Verdict: Is Bitcoin Vault Worth Your Money?

Based on the security incorporated in these devices, there is no doubt Bitcoin Vault is worth every penny. The device is specially designed to provide users with a sophisticated method to store funds and other digital assets over a long period. Some of the factors that make BC Vault stand out are its adoption of highly unconventional operational and security features.

It, for instance, is the first hardware wallet to forego the recovery seed in favor of an SD card backup. There also aren’t many hardware or software wallets that have as much as four passwords. And while most multisig wallets support multiple wallets, only a few support individualized passwords for each wallet.