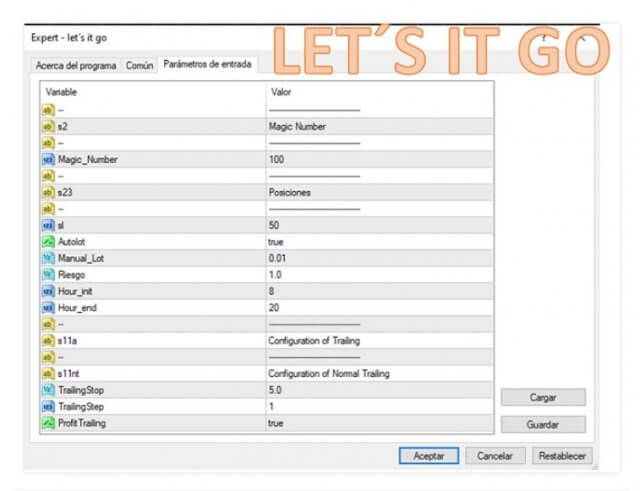 This version of the Let’s Do it EA is designed for the MetaTrader 4 platform and published on the MQL5 market as a simple averaging method EA for beginners. There are no specific traits about this EA and probably it is meant to avoid the promotion of any content that they could not consume. Let’s Do it is developed by Marta Gonzalez from Spain who has at least 53 products published on the MQL5 market and mostly works as a freelance programmer receiving good ratings. The first version of this EA is published on the 8th of February 2020, it is a new product with one update bringing the current version to 1.1. The update contains just the adaptation to Asian traders.

As it is designed for beginners, the EA does not require any supervision and does not require a large deposit. The author recommends $100 as a base for start. The content of the Overview page is simple with common marketing phrasing. Beginner traders should know the EA is probably a scalper using averaging methods, as what can be assumed according to the settings range. It is described as an advanced trading system that analyses and makes decisions independently, although every EA does this. Highlighting simplicity is a good approach but overdoing it completely masks why this EA is different or what is great about it.

There are some Risk Managing measures implemented such as the fixed Stop Loss and not opening more than one trade per currency pair. There are no risky strategies such as Grid or Martingale, although averaging is implemented. Interestingly, the author states in one sentence that Averaging is not used but in the features list states, “Very stable growth curve as a result of smart averaging techniques.”

FIFO method will not render the EA useless, however, in our opinion, the brokers that use First In First Out order method are not competitive. VPS, low spreads, commissions, and ECN environment are recommended as with every fast scalper. The default settings are good to go for the EUR/USD pair on the M1 timeframe. This timeframe is the lowest possible in the MT4 platform, it is not commonly used, although some scalping strategies are optimized for it. Let s Do It seems to be one of them, at least according to the performance charts published. The default settings are optimized for the EUR/USD but the author stated many other majors involving GBP, CAD, AUD, CHF, NZD, and even Spot Gold. It is not mentioned if trading on other pairs demands settings adjustment.

Interestingly, one of the features is the ability of the aEA to follow trend and trend reversal strategies. How is this is an option is not clear as the settings panel does not show this variable. Another curiosity is the implemented module to scan for concentrated prices, therefore, Support and Resistance levels. Based on the default setting screenshot, the working hours for this EA is from 8 am to 8 pm GMT covering the more active market environment. This is not common for scalper EAs where low volatility is preferable during the night time. The author left out to mention the Trailing Stop feature that is clearly implemented and customizable in the settings.

Settings panels will allow you to set the Magic Number, the fixed Stop Loss in points, Autolot management based on the account balance percentage or a fixed lot, working time, and Trailing Stop options. Trailing Stop can be set to simple, Step, and In profit clause.

The price for Let’s Do it MT4 is $30, in the very low range on the MQL5 market. You will receive 5 activations and if you want to rent it there are several timing offers. For one month you will be charged $10, for 3 months – $15, for 6 months – 20$ and for one year $25. The demo is offered and strongly recommended if you plan on putting this EA to the real account.

The performance charts are all positive of course, but some key elements reveal how much is risked and the result traits of the implemented strategy. Note that the screenshots provide only 25% modeling quality in the MT4 Strategy Tester module and therefore are highly inaccurate. On all pairs, the EA has a high success rate and consecutive successful trades in profit. However, losing trades are 5 times larger than profit ones. On average, the EA makes 7 consecutive profit trades. Maximal drawdown is not high, on most of the tested currency pairs, it was around 10%.

As for now, there are no reviews or comments, as with the majority of the developer products, it is not popular yet.

This Forex service can be found at the following web address: https://www.mql5.com/en/market/product/45925