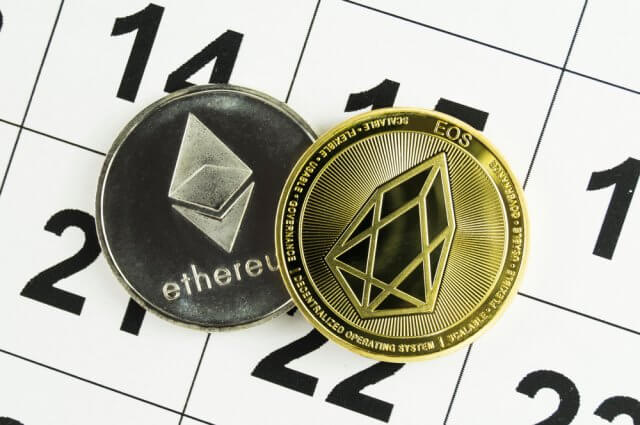 EOS and Ethereum both are popular blockchain smart contract platforms. To know whether EOS is a better investment or Ethereum, we will need to compare the two technologies by exploring basic concepts and comparing their mechanisms to draw out the necessary conclusions. After Ethereum was introduced in the crypto industry, two years later, EOS was launched and claimed to fix the flaws in Ethereum. EOS is a strong, scalable contender and might outperform Ethereum. The battle of EOS vs. Ethereum is the most interesting and happening space in the crypto industry.

Ethereum is a blockchain platform launched in 2015 by Vitalik Buterin. It allows users to send and receive funds independently without the assistance of any third party. It was the first blockchain project to install the smart technology contract. In this technology, some predefined conditions are applied, and users are needed to justify the conditions to proceed with transactions without the need for an intermediate body. This decentralized blockchain has its own cryptocurrency called Ether (ETH), which is tradable in most of the crypto exchanges.

EOS is a new blockchain platform that can also manage smart contracts. The Block.one company launched this project in 2017. It has created history by raising the highest Initial Coin Offering(ICO), worth more than $2.5 billion. It has its own EOS coin, which can be transferred from wallet to wallet. EOS aims to become the most scalable, cheapest, and fastest blockchain platform.

Presently Ethereum can support 15 transactions per second, whereas EOS can serve up to at least 10,000 transactions/second. EOS using IoT provides for inter-blockchain communication, which creates blockchains to allow more transactions. Ethereum is working on two protocols called “Plasma” and “Sharding” to increase transaction numbers per second.

On Ethereum, users need to pay gas for each transaction, but EOS works completely in a different way. EOS blockchain users deposit their token to cover the bandwidth required for the transaction.

Ethereum is based upon the proof-of-work model, and EOS follows the proof-of-stake model. The transactions are verified without the support of any intermediate system. Ethereum generates random puzzles at every node before confirming the transactions. These puzzles are so difficult to solve that you need to take the help of experts called “Miners.” While EOS offers to stake your coins to verify transactions, the stakers have a chance to earn the rewards.

EOS Vs. Ethereum: Who holds the future?

Ethereum, just after Bitcoin, is the most popular cryptocurrency across the world. EOS, right from its initial days, is performing exceptionally well. EOS is yet to achieve growth that Ethereum has already achieved, but EOS is significantly better than Ethereum. EOS is a more user-friendly cryptocurrency than ETH. It’s still too early to think about how far EOS will go because the blockchain ecosystem is highly unpredictable.

EOS is younger than Ethereum and has improved scalability and transaction fees as compared to Ethereum, but still, it’s under so much controversy because of its more centralized layout. If Ethereum successfully implements the proof-of-stake mechanism, then EOS might not be able to outperform it. On the other hand, if Ethereum doesn’t reduce it’s transaction costs, then EOS will easily overtake Ethereum soon is what crypto experts believe. Cheers!