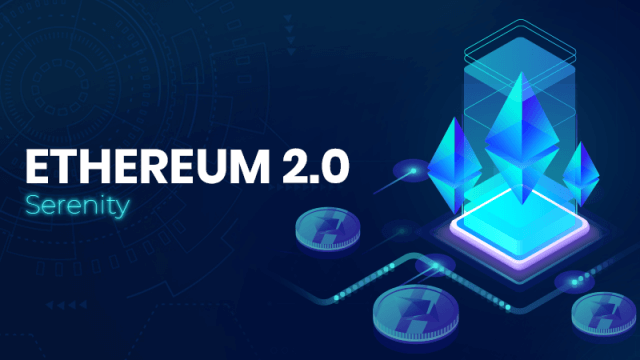 After a years-long wait, Ethereum 2.0 is finally here. Well, almost. The major upgrade will see the Ethereum network fix various scalability and security issues. The most notable shift will perhaps be moving from a proof-of-work (PoW) consensus mechanism to a proof-of-stake (PoS) protocol.

But this is just a scratch on the surface. With Ethereum being one of the most important cryptocurrencies in the world, Ethereum 2.0 is set to shake up not just the Ethereum ecosystem but cryptoverse in general.

Ethereum 2.0 is an upgrade to the Ethereum protocol. Also known as Eth2 or Serenity, the update is meant to improve the scalability and security of Ethereum. The current Ethereum blockchain, with the scalability of 15 transactions per second (TPS), can simply not handle the volume that would be required to handle millions of transactions per second. Eth2 will not just power dramatically more than that; it will also remove bottlenecks for developers and users.

Ethereum founder Vitalik Buterin and the team have been working on Eth2 for years now. This is because scaling a blockchain without sacrificing security and decentralization is not an easy task. Eth2 will address these issues through several important features that will be starkly different from the Ethereum we have now.

What’s the difference between Ethereum and Ethereum 2.0?

What will mainly distinguish the two versions is that Ethereum 2.0 will feature a proof-of-stake consensus, implementing shard chains and the beacon chain. Let’s look at each of these features in more detail.

Ethereum currently implements a proof-of-work consensus model to secure the network and maintain and facilitate an incentive mechanism to reward miners who confirm and validate transactions on the network. Unfortunately, PoW requires huge amounts of energy – which is not sustainable in the long run.

PoS is a far faster and sustainable alternative to PoW. PoS involves granting stakers in the network the right to become a validator and get paid to verify transactions. Other validators can confirm the “minting” of the block. If there are enough confirmations, the block can be added to the blockchain. Validators will then be rewarded with block rewards for the successful block.

PoS is a lot of times better than PoW when it comes to energy-efficiency. This is because, unlike PoW, there isn’t an energy-intensive process required to validate blocks. This is also good news for individuals who want to help secure the network.

Another feature that a PoS model will enable security on Ethereum 2.0 not previously possible with PoW. PoW is susceptible to a 51% attack. The PoS model will not only reward validators for being honest; it will penalize attempts at fraud. One such penalty will be ‘slashing,’ which will not only involve the validator in question being forced out, but all/part of their stake will be penalized.

Shard chains act like the blockchain but only hold a specific subset of the blockchain in question. This means nodes only have to manage a ‘shard’ of the entire network. This goes a long way in increasing transaction throughput and enhancing scalability.

Shard chains will work in a parallel version. This necessitates a mechanism of sorts to keep them in sync with one another. Enter the beacon chain, which will facilitate consensus to shard chains.

Beacon chain is a completely new, proof-of-stake blockchain rendering that will be the coordinator of the whole ecosystem. The chain will facilitate data sharing between the shard chains and facilitate scalability. The beacon chain will be the first roll-out feature of Eth2.

How Ethereum 2.0 Will Be Rolled Out

Ethereum 2.0 will not be released at once but rather in three phases. Each phase will feature a crucial feature to contribute to the success of the new blockchain.

Phase 0 constitutes the first rollout, and it will come down to the release of the beacon chain, which is central to the network’s functioning. The beacon chain will start accepting stakers’ deposits in preparation for the proof-of-stake consensus. All registered stakers will not be able to withdraw from the contract until shard chains are put in place. Afterward, staking deposits will be locked up until the next rollout. The Phase needed a minimum threshold of 524,288 ETH to launch. This target has already been met and even passed.

The next phase will be two phases combined: Phase 1 and Phase 1.5. Phase 1 will bring with it shard chains, which will allow validators to produce blocks via a PoS consensus. Phase 1.5 will officially now introduce shard chains and begin the transition from proof-of-work to proof-of-stake. This phase will be released in 2021.

This will be the final phase, whereby the blockchain will fully support shard chains – which will have taken on new features and capabilities. The shards will have the ability to integrate with smart contracts, allowing decentralized applications (DApps) developers to mesh seamlessly with the network. This phase will be slowly rolled out in 2021 and beyond.

When Will Ethereum 2.0 Be Released?

The Ethereum 2.0 upgrade will start rolling out on December 1, according to a blog post by the Ethereum Foundation on November 4. The launch is conditional on at least 16,383 validators, each staking 32 ETH to make up 524,288 ETH. Vitalik Buterin led the way in depositing ETH, putting up 3,200 (worth more than $1 million), according to Etherscan, which tracks Ethereum transactions. See the launch pad where ETH is being deposited here.

Ethereum enthusiasts are naturally excited about the launch and hope everything will fall in place. If the launch is successful, the Ethereum network as we know it will change a lot – and for the better.

Ethereum 2.0 is a long-awaited update to the world’s second most popular crypto and blockchain network. Having been introduced to the world of smart contracts and DApps, the network has been the most popular go-to option for DApp developers worldwide. But in recent years, the network has been grappling with scalability issues that would have proven unsustainable in the long term.

The rollout of the new network will take a while, even longer than many expect. But as long as the train will soon leave the station – that’s good enough news for the community.