While there are many technical indicators that can help with identifying changes in the strength, momentum, or the duration of a trend, none of them are simpler than the Moving Average Convergence Divergence, better known as MACD.

By definition, the MACD indicator turns two moving averages into a momentum oscillator. It does so by subtracting the longer period moving average from the shorter period moving average.
As the MACD indicator is a “lagging” or a “trend following” indicator, it actually trails pricing events that already took place in order to determine the strength of the current trend.
As with most indicators, though, you won’t make money just by understanding the indicator works, but rather by knowing how to use this indicator. However, it is still worth explaining what MACD is, so you have a better understanding of why it is such a widely used and loved indicator.

How to interpret the MACD indicator
It might be hard to explain how MACD works, but it is actually one of the easiest indicators to interpret as everything is represented clearly and visually.

When the MACD line performs a cross above the signal line, it is interpreted by the traders as a bullish cross. On the other hand, when the MACD line crosses under, traders know that this is a bearish cross. These crosses indicate a shift in momentum, which can represent a buy or sell opportunity. 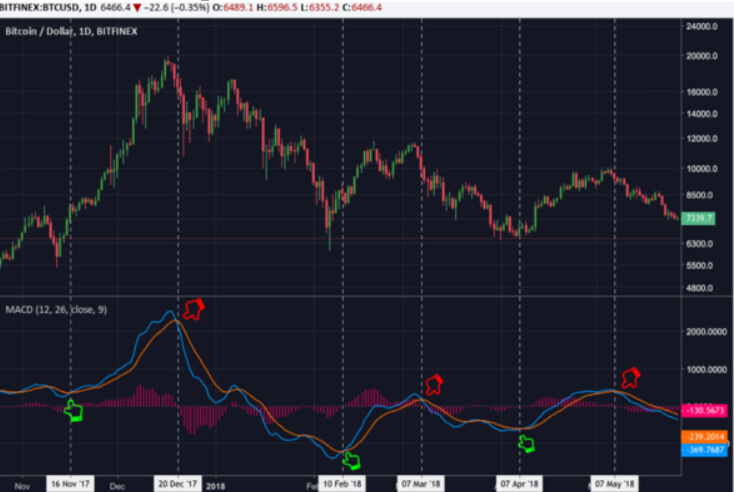 As seen in the picture, MACD crosses provide confirmation of a trend change. This is true, at least in the short term.

It’s recommended (and almost necessary) to use the MACD indicator in conjunction with some other indicators such as volume or RSI because MACD, just like any other indicator, is not 100% accurate and can give off false signals.
Check out part 2 of Trading cryptocurrencies using the MACD indicator to learn more about how this indicator shows overbought and oversold market conditions as well as about what zero-line represents.