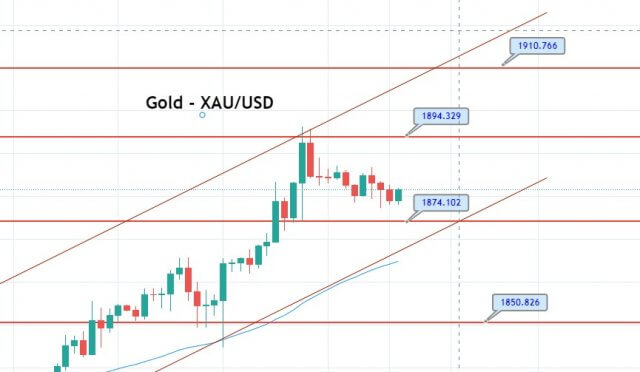 During Friday’s Asian trading session, the yellow metal prices failed to extend their overnight winning streak. They edged lower around the $1,880 level mainly due to the upbeat market sentiment, which tends to undermine the yellow-metal prices as investors continuing a retreat from the safe-haven asset after progress in U.S. stimulus measures and Brexit talks. Elsewhere, the reason behind the risk-on market sentiment could also be associated with the expectations for global economic recovery on potential coronavirus vaccines.

In contrast to this, the widespread rise in the COVID-19 cases from the U.K., U.S., and Europe keeps challenging the market risk-on mood, helping the bullion prices limit their deeper losses. Apart from this, the US-China long-lasting tussle is also questioning the market upside momentum, which also caps further downside for the gold. Besides this, the broad-based U.S. dollar weakness has also played its major role in supporting the gold prices as the price of gold is inversely related to the price of the U.S. dollar. The yellow metal is currently trading at 1,883.14 and consolidating in the range between 1,878.60 – 1,886.06.

At the USD front, the broad-based U.S. dollar failed to stop its long bearish bias and dropped towards its worst week in a month as demand for the safe-haven assets declined amid progress toward agreeing U.S. fiscal stimulus. It is worth mentioning that the U.S. dollar was down 1.2% for the week so far and has dropped by 12.7% from a 3-year peak in March, falling to 89.862, just above a 2-and-a-half-year low seen on the previous day. Besides, the U.S. dollar losses could also be associated with Powell’s dovish comments on inflation. The U.S. Federal Reserve’s promised to keep interest rates low until an economic recovery is secure. However, the U.S. dollar losses helped the yellow-metal prices limit its deeper losses as the price of gold is inversely related to the U.S. dollar price.

In contrast to this, the growing worries over the resurgence of the coronavirus pandemic have been destroying the hopes of the global economic recovery, which keeps challenging the market trading sentiment and help the yellow-metal prices to limit their deeper losses. On the other hand, the long-lasting tussle between the United States and China remains on the cards as the U.S. continuously imposing sanctions on Beijing. This, in turn, added further questions around the market trading sentiment and became the key factor that kept the lid on any additional losses in the safe-haven metal prices.

Looking ahead, the market traders will keep their eyes on U.K. Retail Sales m/m, which are scheduled for publicity later in the day. Meanwhile, the German PPI m/m data will also be key to watch. Apart from this, the updates surrounding the Brexit, virus, and U.S. stimulus package will not lose their importance.

The yellow metal gold is trading in between a tight range of 1,884 – 1,880 mark. Gold retraced downward to complete 38.2% Fibonacci level of 1,876. On the daily timeframe, gold has formed an upward channel supporting gold around 1,874 level along with a resistance level of 1,894 and 1,910 level. The 50 periods EMA holds around 1,864, suggesting an upward trend in gold; however, we are not opening a buying trade yet as the MACD forms histograms below 0, supporting a selling trend. Let’s consider taking a buying trade over the 1,874 level today. Good luck!