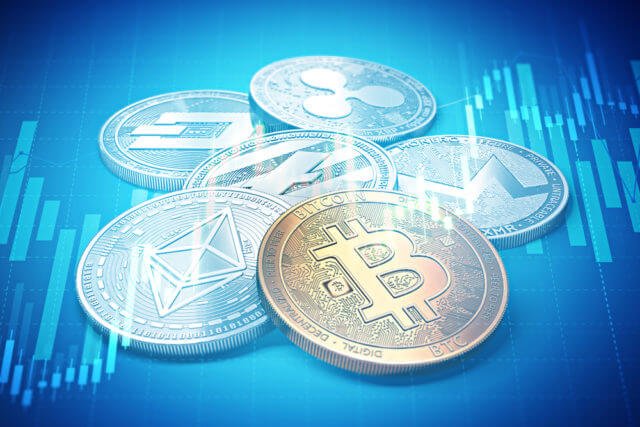 Bitcoin has recovered from testing the $8,000 line and dropping just slightly below it. The largest market cap cryptocurrency has had a green day, but so did other cryptocurrencies. While Bitcoin gained 3.9%, Ethereum went up by 5,24% and XRP by 7,5%. Out of the top10 cryptocurrencies by market capitalization, EOS did the best, gaining 8% on the day. 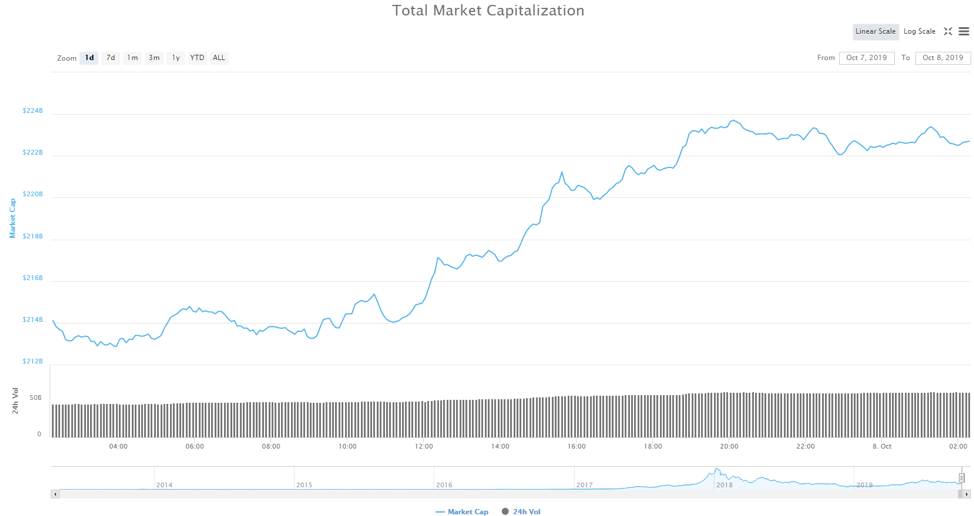 With no major news today besides PayPal officially pulling out of the Libra project, cryptocurrency markets are left to the pure buyer/seller sentiment and technical factors.

This is a crucial moment for the cryptocurrency market, as the next movement upwards or downwards will most likely decide where the market will go in the near future. Both the bulls and the bears have their case made, and it’s up to pure supply and demand to decide the future of the cryptocurrency valuation.

Bitcoin (BTC) has defended a key historical price support of around $7,700, which was a major factor in keeping the bulls in the game. If it weren’t for this move, the hopes of a corrective rally would be slim to none in the short term.

After rejecting the resistance line upwards, Bitcoin is stuck in a spot between its $8,500 suggested resistance and a key support level of around $7,700. However, a glimmer of hope for the bulls came today after Bitcoin managed to jump to $8,300, before consolidating just below it. 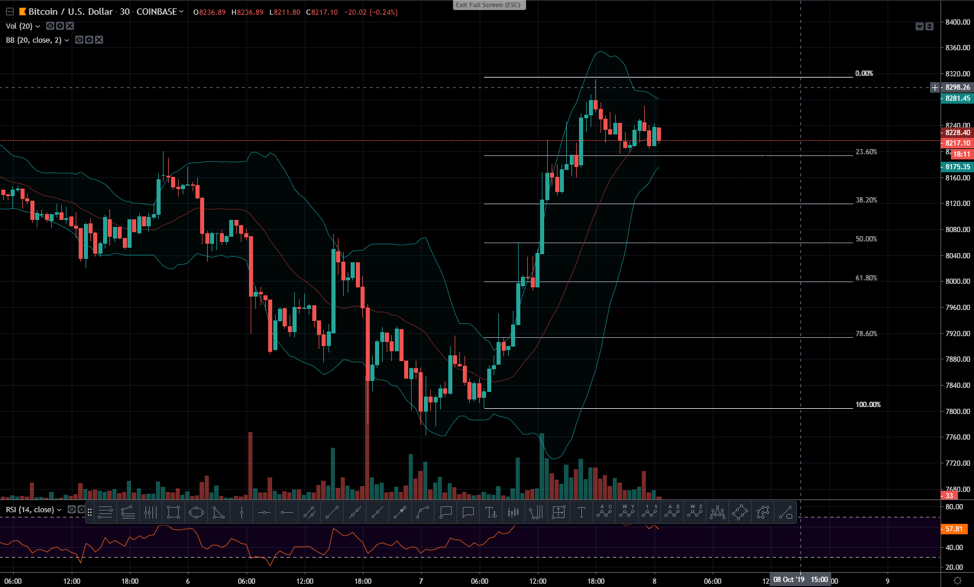 With the RSI indicator slowly moving away from the overbought territory, Bitcoin is stabilizing at the $8250 price level. The 23,6% Fib retracement line seems to be holding well as a temporary support line. Meanwhile, the volume is slowly reducing to the levels prior to today’s spike upwards.

After everyone thought that the Altcoin season would never come, Ethereum showed that that might not be the case. Even though highly correlated to the movements of Bitcoin, Ethereum managed to gain close to 1,4% more than the largest cryptocurrency today. With far more stable increase in volume, Ethereum paved the way for other cryptocurrencies to move upwards too. 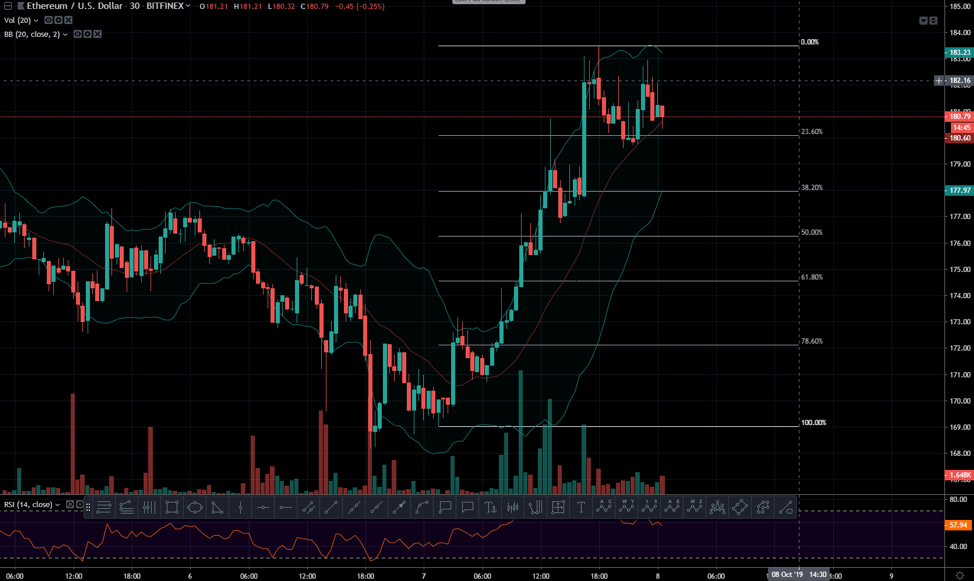 Ethereum did not seem to lose out on volume as much as Bitcoin did after the upwards spike, which resulted in a positive gain both when compared to the USD and the BTC. The Fib line of 23,6% got tested on four separate 30-minute candles, but the support line managed to hold. Ethereum is now consolidating around the price of $180.

XRP came out as the highest-gaining cryptocurrency in the top3, increasing in price by around 7,5%. However, it is can still be considered the most unstable of the three, technically speaking. With its volume differences, the highest of the three top cryptocurrencies (an instant large spike followed by unstable volume fluctuations), and the almost-immediate break of the first Fib retracement line, XRP is looking for a consolidation spot below its current price. The Fib retracement of 38,2%, which currently sits at $0.275, acts as its immediate support. However, that support line got tested on numerous occasions in the past 24 hours. 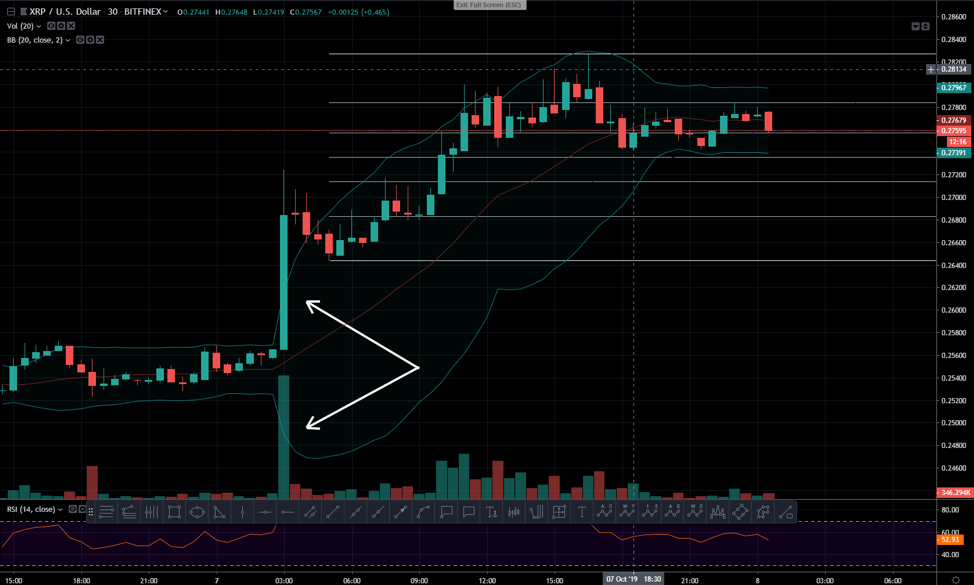