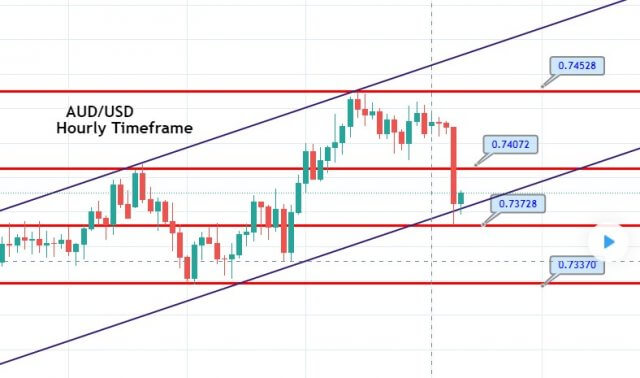 The AUD/USD closed at 0.74260 after placing a high of 0.74435 and a low of 0.74100. After rising for three consecutive days, the AUD/USD pair dropped on Friday and posted small losses as it remained confined in a range between 0.74100 and 0.74400. The currency pair rose in the early trading session on Friday as it followed the previous day’s trend and because of the Australian side’s supportive economic data. Another factor involved in the rising AUD/USD prices in the early trading session was the improved risk-sentiment from the latest development in the coronavirus vaccine.

The approval for emergency use authorization to Pfizer and BioNtech added in the risk sentiment as the hopes for global economic recovery increased and supported the risk-sensitive Aussie. The strong Australian dollar pushed the AUD/USD pair higher in early trading hours on Friday. On the data front, at 05:30 GMT, the Retail Sales from Australia raised to 1.4% against the projected 0.5% and supported the Australian dollar, and capped further losses in AUD/USD pair.

Despite the US’s disappointing Job report, the unemployment rate and factory order data managed to support the US dollar through the rough time and exerted downward pressure on AUD/USD pair. Meanwhile, the AUD/USD pair’s losses were also limited because of the underlying pressure on the US dollar after the agreement between Democrats and Republicans over the $908 billion stimulus package. The agreement on the bipartisan proposal added hopes that a massive stimulus could also be approved and weighed on the US dollar that kept the losses in AUD/USD pair limited on Friday.

The AUD/USD slipped to trade at 0.7372 level, holding above an upward support level, which is extended by an upward channel. The AUD/USD channel may drive upward movement until 0.7405 and 0.7440 resistance levels on the higher side. Conversely, a bearish breakout of 0.7372 level can extend the selling trend until the next support level of 0.7337. The RSI and MACD are reporting selling bias in the pair. Good luck!