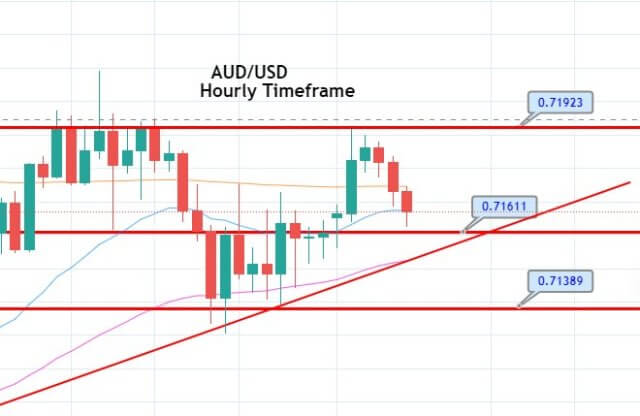 The AUD/USD currency pair succeeded to stop its early-day losses and drew some fresh bids around closer to the 0.7200 level mainly due to the risk-on market sentiment, backed by the positive news over the U.S. President Donald Trump’s recovery from COVID-19, which eventually underpinned the perceived risk currency Australian dollar and contributed to the currency pair gains. As per the latest report, the doctors of U.S. President Donald Trump said that he and his wife could be discharged from the hospital as soon as Monday.

Apart from this, the trading sentiment was further bolstered by the updates suggesting a sooner end to the deadlock over the U.S. aid package talks. Besides, the fresh hopes of a soft Brexit, triggered after the weekend meeting between the UK PM Boris Johnson and E.U. Commission President Ursula von der Leyen, also favors the market risk-tone extended further support to the currency pair. Across the pond, Australia reports suggest a A$7.5B boost for transport infrastructure spending, which also gave additional support to the Australian dollar and helped the currency pair to stay bids on the day.

In the meantime, the broad-based U.S. dollar selling bias, triggered by the marker risk-on sentiment, also played its major role in supporting the currency pair. Moreover, the U.S. dollar losses were further bolstered by the intensifying doubts over the U.S. economic recovery. On the contrary, the virus news from elsewhere keeps challenging the upbeat market sentiment and becomes the key factor that kept the pressure on any additional gains in the AUD/USD pair. The AUD/USD currency pair is currently trading at 0.7172 and consolidating in the range between 0.7158 – 0.7191.

It is worth recalling that the AUD/USD currency pair has been pressured since Friday after the negative news of U.S. President Donald Trump and his wife’s infection to the coronavirus (COVID-19). However, America’s fresh and positive updates helped the equity market stop its deeper losses on the day. The latest updates from the U.S. suggest that President Trump and his wife recover from the virus-led illness. Moreover, the hopes were further fueled after the comments from doctors off U.S. President Donald Trump, suggesting he and his wife could be discharged from the hospital as soon as Monday.

Moreover, the market risk tone was further bolstered by optimism over the U.S. aid package talks. These hopes were originated after the U.S. House Speaker Nancy Pelosi showed positive signals about reaching the stimulus deal. On the other hand, the meeting between the UK PM Boris Johnson and E.U. Commission President Ursula von der Leyen over the weekend also offers fresh hopes of the oft Brexit, which also kept the market trading sentiment upbeat.

Across the ocean, bullish sentiment around the AUD/USD currency pair was further bolstered by the reports suggesting that the Australian Deputy Prime Minister (PM) Michael McCormack is ready to announce a further $7.5 billion new transport infrastructure spending in Tuesday’s federal budget. Looking forward, the market traders keeping their eyes on the news concerning the American President’s health. Apart from this, the US ISM Services PMI for September, expected 56.0, would be key to watch. In the meantime, the updates surrounding the fresh Sino-US tussle, as well as the coronavirus (COVID-19), could not lose their importance.