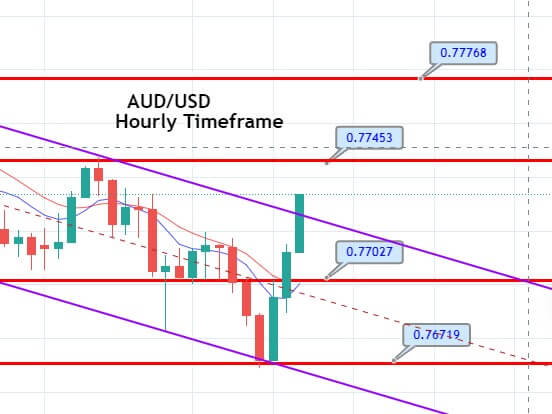 The AUD/USD closed at 0.77128 after placing a high of 0.77471 and a low of 0.76824. AUD/USD pair remained flat throughout the day as it ended its day at the same level it started its day with on Monday. The AUD/USD pair advanced higher during the European trading hours but reversed its gains in the second half of the day on the back of US dollar strength and the risk-off market sentiment. The risk perceived Aussie suffered when the rising global number of deaths and coronavirus cases raised fears for global economic recovery and surged the appeal for a safe-haven.

As the banks were closed due to Australia Day Holiday on Monday, the currency pair AUD/USD left with the US dollar market valuation. The US Dollar Index (DXY) climbed to 90.51 on Monday however struggled to remain there and preserve its bullish momentum. The rising greenback prices added weight to the AUD/USD pair, and the pair started to lose its early daily gains. The US dollar was also strong on board as the rival currencies, including Euro and British Pound, were weak on the day. As well, the prospects of the massive stimulus of $1.9 trillion in coronavirus relief fund were also fading in the market over the speculation of bill facing rejection at Senate. Senate has already passed a bill of 900 billion US dollars in the previous month, and there is very little possibility that they would agree to pass trillions of dollars in spending after a short passage of time.

These hopes also kept the US dollar stronger and continued weighing on the AUD/USD pair on Monday. Meanwhile, the risk-off market sentiment also kept the pair under pressure on the day. The rising number of coronavirus cases and death rate across the globe due to new variants of COVID-19 raised fears of nationwide lockdown in many countries that ultimately raised the question of global economic recovery and supported the risk-off market sentiment.

The risk-sensitive Aussie suffered in risk-off market sentiment and started to decline that ultimately dragged the pair AUD/USD further on the downside, and the pair closed its day on the same level it started its day with, giving flat movement for the day. On the data front, at 19:00 GMT, CB Leading Index from China raised in December to 1.2% against the previous 1.1% and supported the China-proxy Australian dollar, and capped further downside in AUD/USD pair.

The AUD/USD is trading at 0.7733 level, having formed three white soldiers on the two-hourly timeframe. On the higher side, the pair may find an immediate resistance at the 0.7745 level. Continuation of an upward trend can extend buying trend until 0.7745 level. A bullish breakout of 0.7745 level is also expected to trigger further buying until the next target level of 0.7776 level. The MACD is exhibiting a bullish crossover on the two-hourly timeframes, and the downward channel seems to get violated. I will be looking to take a sell trade if the Aussie manages to stay below the 0.7745 level. Good luck!