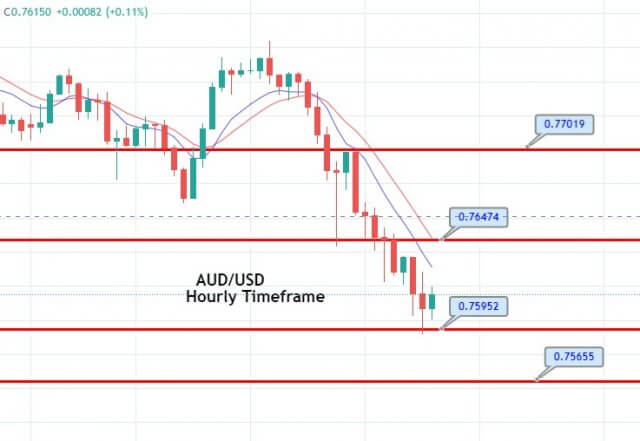 The AUD/USD pair was closed at 0.76630 after placing a high of 0.77636 and a low of 0.76432. The AUD/USD pair reversed its direction on Wednesday and started posting losses for the day due to rising US dollar demand and risk-averse market sentiment. The risk-sensitive Australian dollar suffered on Wednesday as the risk-off market environment started to emerge over the rising concerns of the negative impact of current lockdown restrictions in many nations. The total number of coronavirus cases worldwide reached 100 million and was rising day by day that raised global economic concerns despite the vaccine rollout. These concerns added to the risk-off market sentiment and weighed on the risk perceived Aussie that ultimately dragged the AUD.USD pair on the downside on Wednesday.

The risk-averse market sentiment was also supported by the latest announcement from AstraZeneca and Pfizer, who reported a production difficulty and said that there would be a delay in vaccine delivery that ultimately raised the economic recovery concerns that were connected with the vaccination process. Meanwhile, the US and China’s rising disruptions were also supporting the risk-off market sentiment and weighing on the AUD/USD pair on Wednesday. The US President Joe Biden’s nominee for ambassador to the United Nations, Linda Thomas Greenfield, stressed the importance of US re-engagement with the 193-member world body to challenge China’s efforts to drive an authoritarian agenda.

Beijing has been challenging the traditional US leadership and pushing for greater global influence. The tension between the two superpowers reached its highest in the United Nations last year over the coronavirus pandemic. Greenfield stated that the US broadly has to re-engage with its allies and opponents as she criticized the Trump administration, particularly on its failed efforts to get North Korea to surrender its nuclear weapons program and for trying to “go it alone”.

She also added that Washington needed to pay its dues to the world body (UN). The United States that used to be the largest UN contributor, is currently in arrears about $2 billion for the peacekeeping budget and about $600 million for the regular budget. The fight for greater global influence between China and the US has weighed heavily on the global economy during Trump’s tenure and if the same continued during Biden’s presidency, then the global economy could suffer more. These concerns kept supporting the risk-averse market sentiment and pushed the US dollar that ultimately weighed on AUD/USD pair on Wednesday.

From the Australian side, at 04:30 GMT, the MI Leading Index for January dropped to 0.1% against December’s 0.7%. At 05:30 GMT, the quarter’s CPI raised to 0.9% against the forecasted 0.7% and supported the Australian dollar that capped further losses in AUD/USD pair. The Trimmed Mean CPI for the quarter remained flat with the expectations of 0.4%. The NAB Business Confidence in December came in as 4 against the previous 13.

Meanwhile, the US dollar’s strength due to the Federal Reserve monetary policy decision on Wednesday also kept the pair AUD/USD under pressure. The Fed kept its interest rates at the same level near zero and also maintained its asset purchase program at $120 billion per month.

However, the US central bank said that the economic path was totally dependent on the pandemic progress and the vaccination program. This also supported the US dollar and weighed on AUD/USD pair.