A Black Swan Event, No, It’s A Flock

We are undoubtedly in the worst economic crash the global economy has seen since WW2, and the financial impact may be even more far-reaching. With the financial markets in turmoil and no end in sight, maybe we should pause and take a look at what’s happened over the last few weeks and see if it can give any pointers to future direction, especially within the forex space.
In January, in our video on How to guard your financial assets against the Coronavirus outbreak, we warned that stock indices across the globe would come under continued selling pressure. Although the virus was mostly contained to China, it wasn’t possible, at that time, to predict the terrible crash that we have seen. It was only really when the virus took hold of Italy and broke out in Hong Kong and South Korea, that market jitters forced investors to see the potential of this deadly outbreak and begin selling stocks. Nonetheless, anybody who heeded our advice may well have reduced their exposure to stocks and been financially better off as a result. 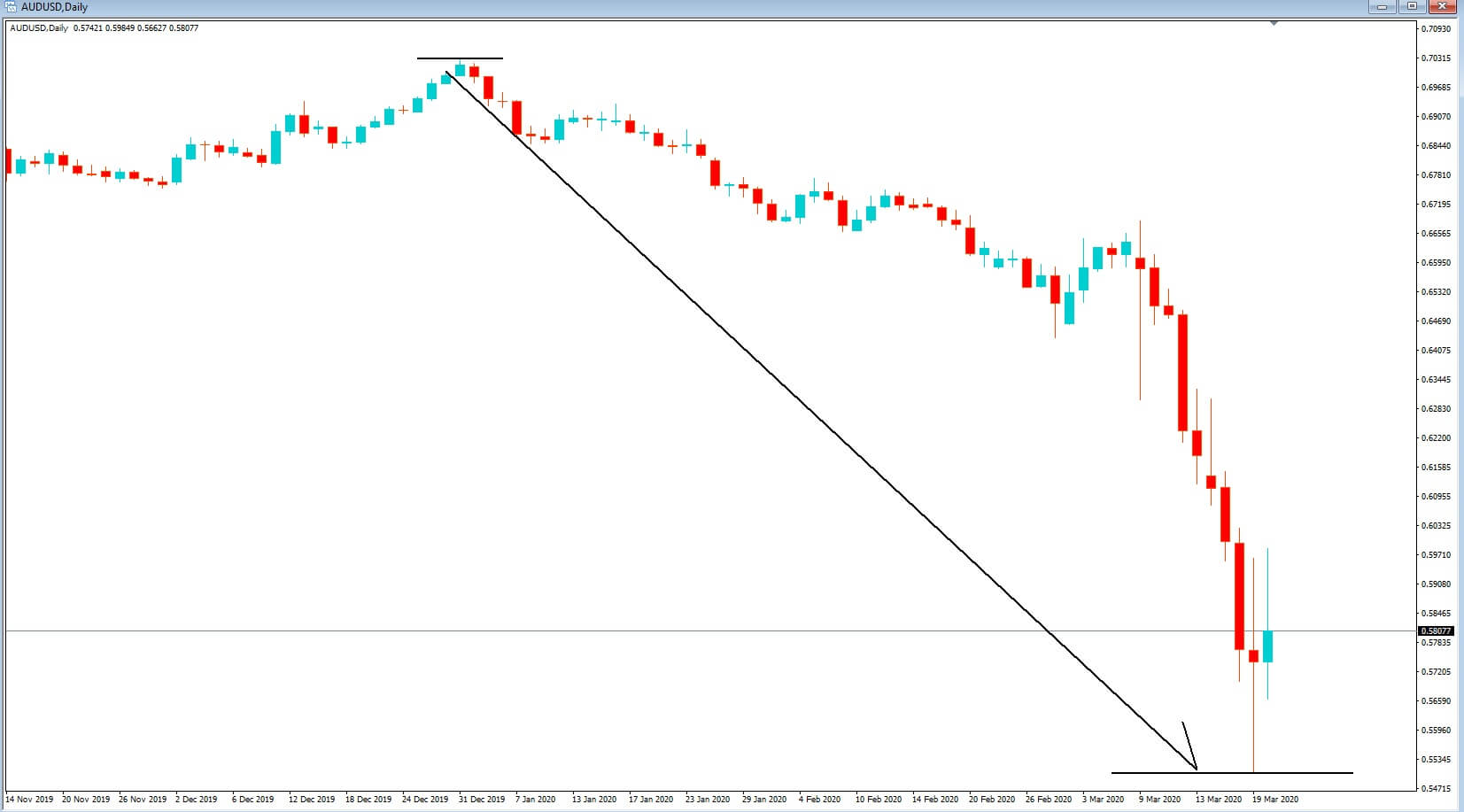 In our February video about How to trade the Australian Dollar and The Convid-19 Pandemic Black Swan Event, again, we called it correctly. With Australia heavily exposed in China, it was highly likely that the Aussie dollar came under extreme selling pressure against the Dollar and that is exactly what happened and where we have seen highs of 0.70 in AUDUSD to a sharp decline to 0.54 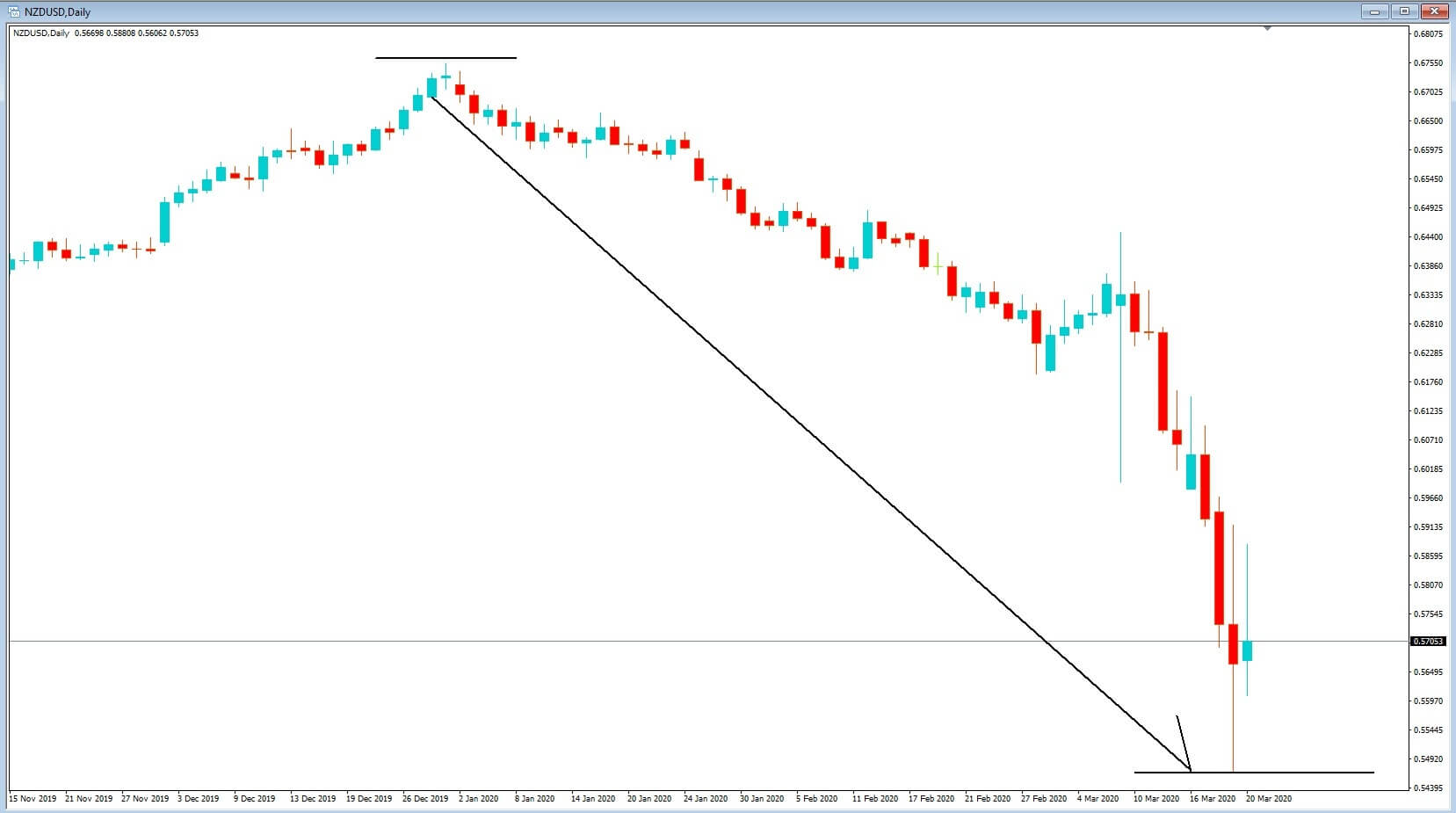 We also warned that New Zealand, whose GDP is heavily dependent on their exports into China, may find that their currencies come under selling pressure too. It has also seen a huge decline against the Dollar from 0.6750 to a low of 0.5490. 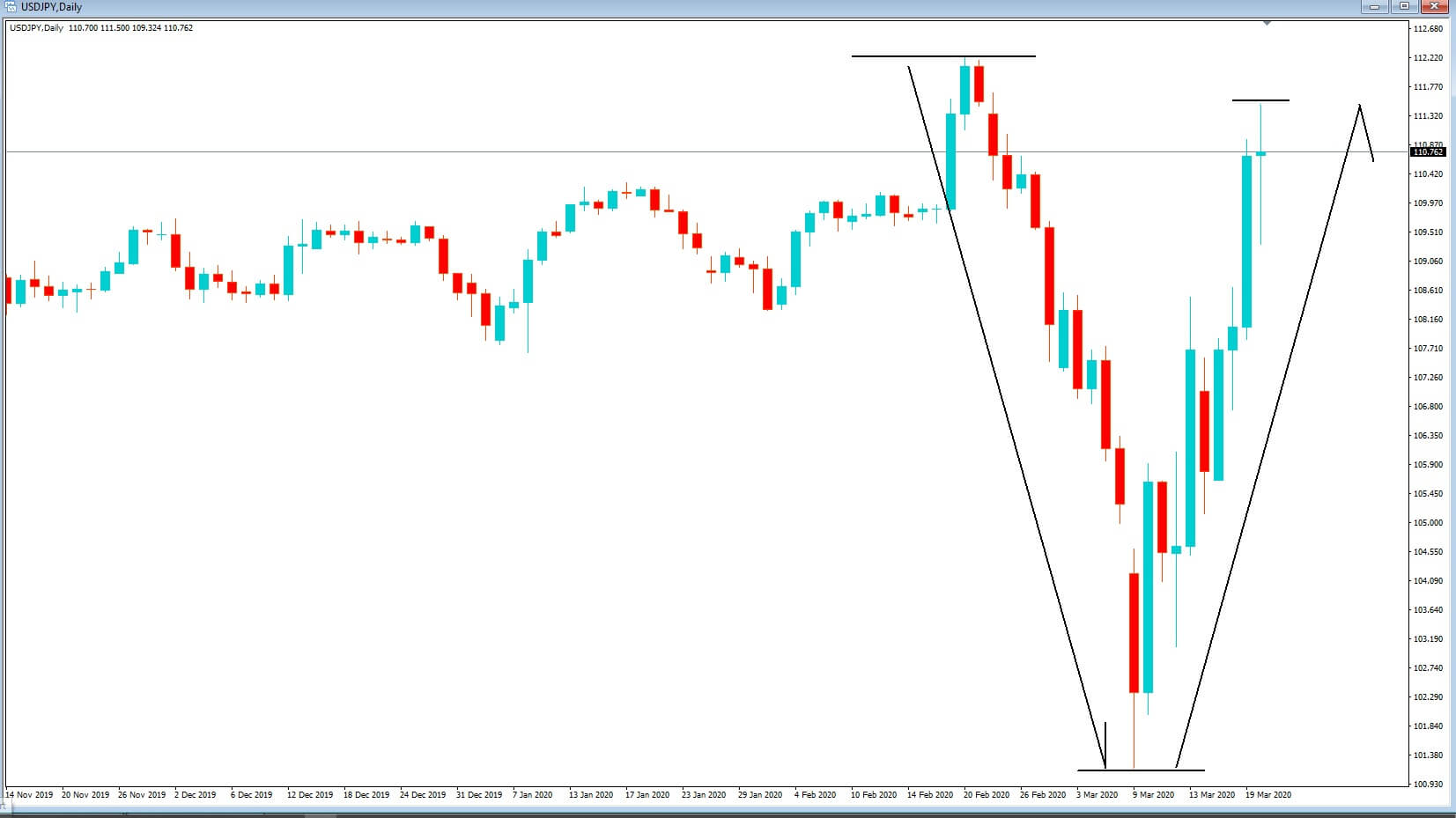 We warned that countries such as Japan and Switzerland would find that their currencies grew stronger due to their safe-haven status. And where USDJPY declined from 112.20 to a low of 101.00 initially, before reversing due to concerns about the virus on the GDP of Japan. 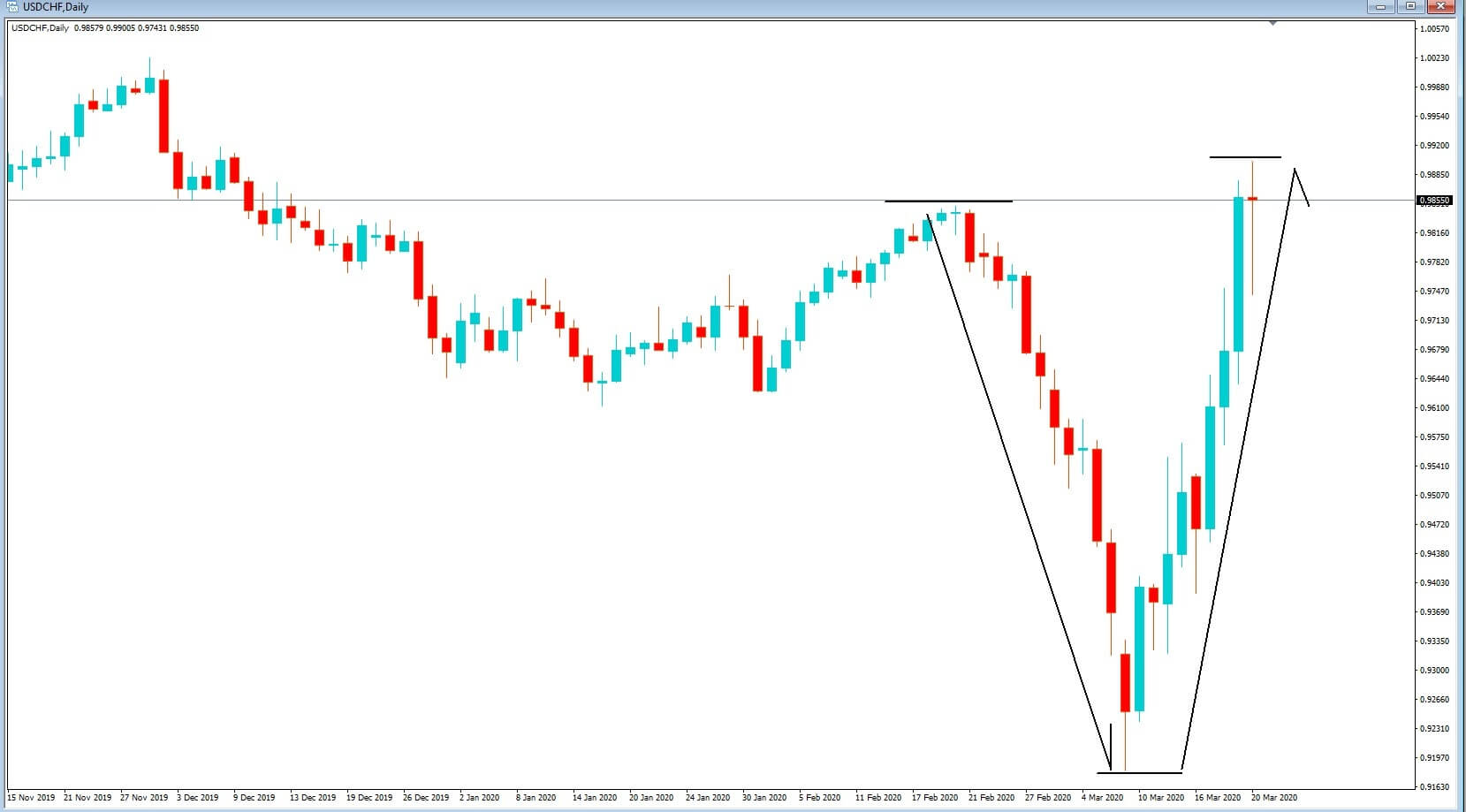 We saw USDCHF tumble from 0.9855 to a low of 0.9160 and warned that the Swiss National Bank would likely intervene in the markets to drive the value of their currency lower for export purposes. That is exactly what happened.
We also warned that all of this could only mean one thing for the US dollar: it’s directional bias will be to the upside. Again, that’s exactly what happened with the Dollar index at highs around the 102.00 level against the Forex Majors. 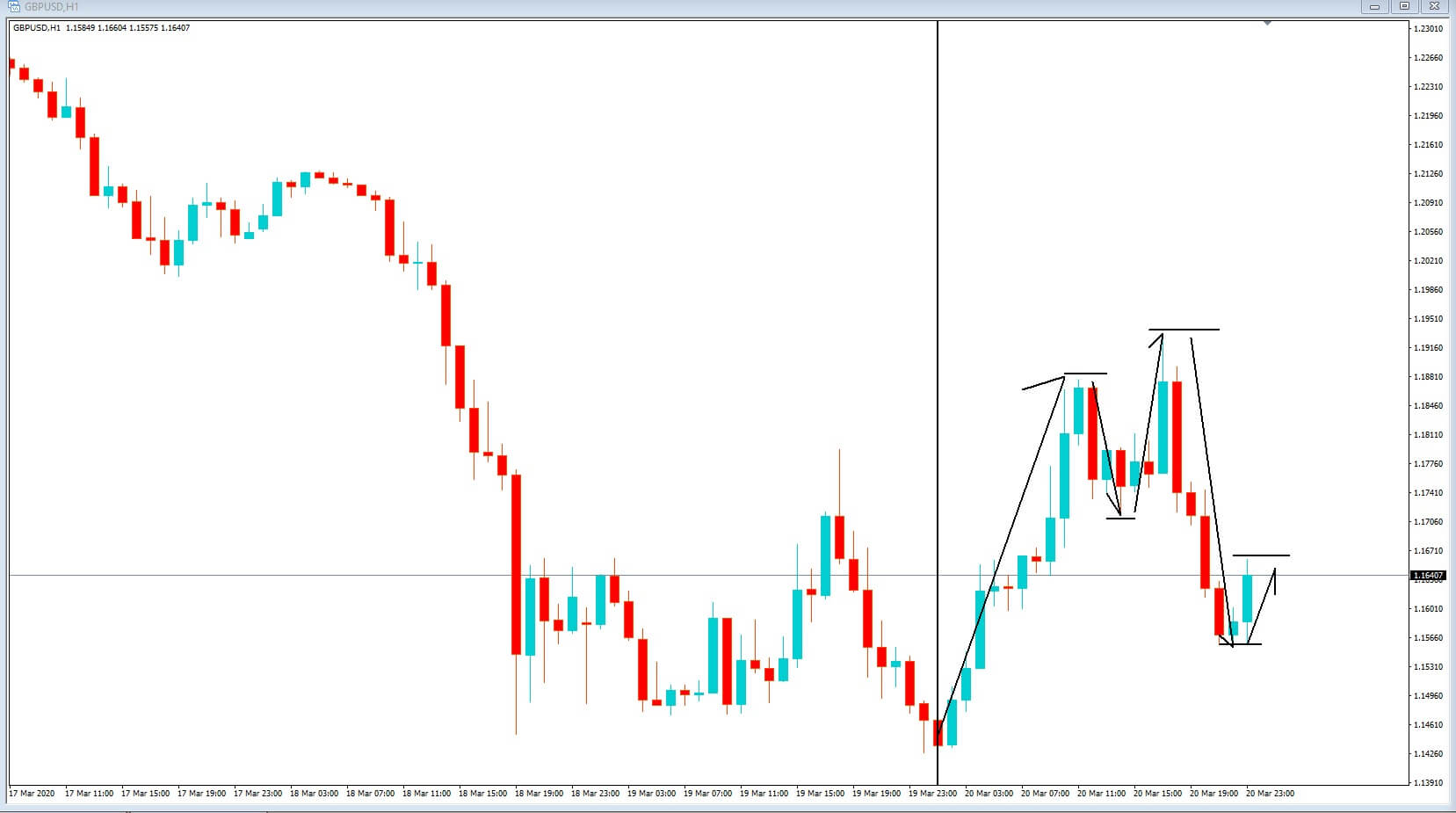 So where to from here? Well, let’s just take a look at the 1-hour chart of the GBPUSD chart from Friday, 20th March. The Arrows show that there was extreme price action, which amounted to over 1400 Pip swings in this pair for this one-day period. This is almost unprecedented in financial trading. It can only tell us that the markets are thinning in volume and leverage and that institutional traders will be largely standing on the sidelines because as the crisis deepens the UK government, just like other western governments, are closing down, albeit temporarily, businesses that produce gross domestic product income revenues. All of that income has suddenly evaporated and gone out of the window. We are now in a situation where governments are financially bailing out business sectors, and they are doing that through borrowing. The burden of the debt that will grow and grow, month after month, as the crisis continues, cannot be predicted, and in fact, the repercussions will be the basis of a secondary crisis which will emerge at the end of the epidemic, due to overburdening debt caused by a virus, while countries and their workforces get back to normal in order to reimburse governments’ coffers in the form of taxation.

And nobody can predict when this virus will be contained enough for the markets to steady themselves. It will only happen when good news emerges, and this does not look at all possible or likely in the short term.
Therefore as institutional and professional traders are waiting on the sidelines and reducing leverage, we would advise retail forex traders to also exert extreme caution in trading these markets while the current crisis persists.