Halloween for forex traders – the scariest event on the calendar for a long time!

Trading in the financial markets is inherently risky. And professional traders will try and mitigate risk by using an economic calendar to either deliberately trade risky events such as interest rate decisions by central governments or gross domestic product announcements, etc. or to avoid them at all costs.
But now and then, risk events come along that truly worry professional traders and investors. The financial week commencing the 2nd of November 2020 has the potential to cause a tsunami of price action movements in financial assets, including currencies, stocks, and bonds, metals, cryptocurrencies, oil, and commodities. Essentially, everything that can be traded will undoubtedly see volatility during this week. 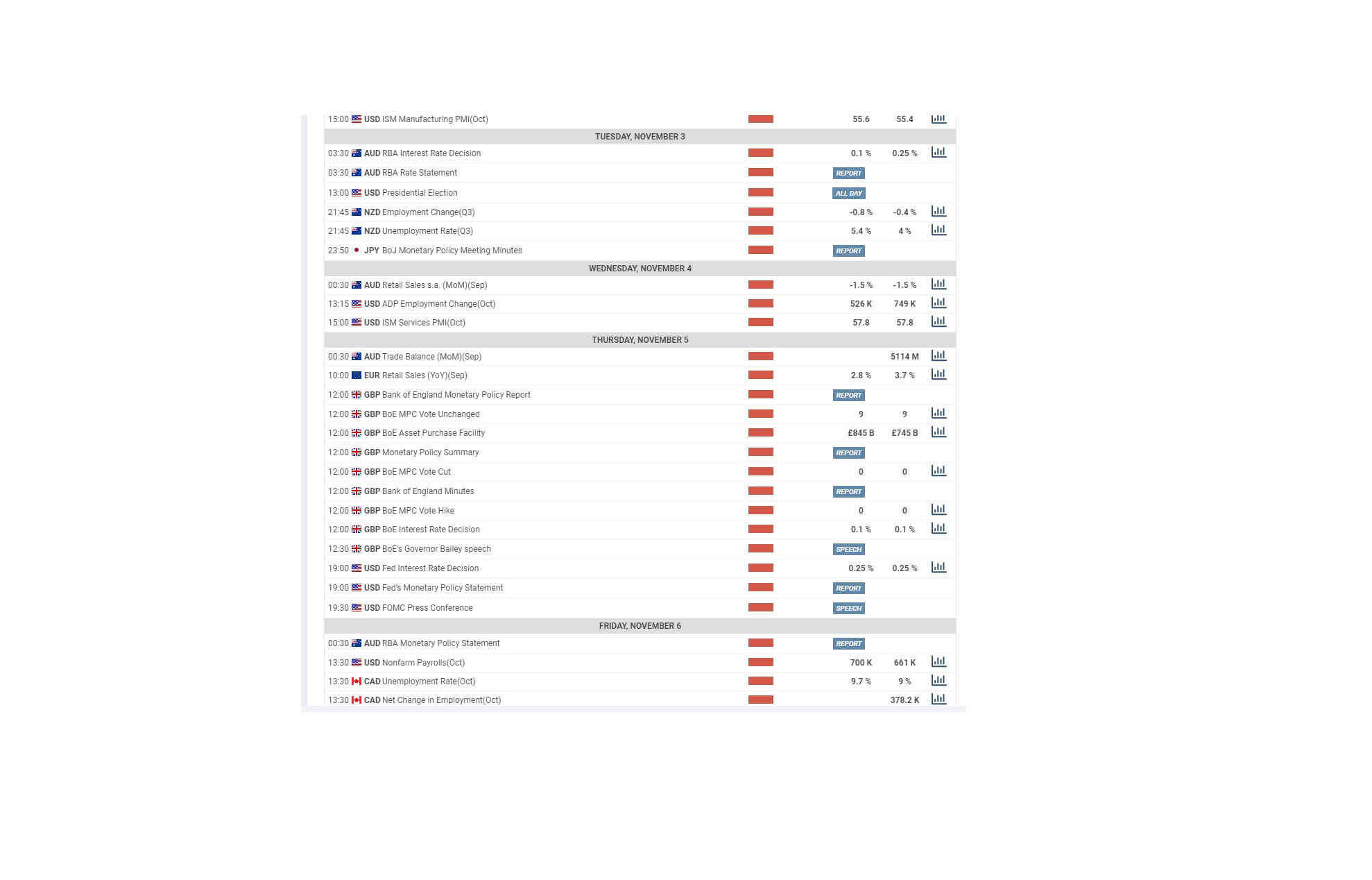 So why should traders be worried about this week?

The financial markets are in a state of flux with large investors and institutions looking to mitigates risky forthcoming events. This means juggling their portfolios in order to diversify against the risk of a huge stock market falls, especially in the United States should Joe Biden become the next president. This is due to fears that he will have a negative impact on the markets with regard to democrats’ policies, including higher taxation and increased regulations for businesses across the USA.

We have already seen increased volatility in the financial markets, especially with currencies where the US dollar has broadly strengthened against other currencies, especially the major currency pairs. While some of this may be attributed to the month-end readjustment by financial institutions and upcoming planning for year-end rebalancing, the bulk of this activity is due to the forthcoming and tightly contested key economic calendar event for this year, which is the US presidential elections on the 3rd of November.

This just happened to coincide with the Japanese monetary policy meeting minutes being released on Tuesday, as well as the Reserve Bank of Australia releasing its interest rate decision. While the election winner will not be announced on the same day, markets will be braced for when the announcement eventually does come. The completely different styles of presidency being offered by both parties are said to have positive and negative impacts for stock markets, with President Trump’s policies of low taxation and low corporate red tape seen as positive for the economy and where Biden’s policies are the opposite and thus create a negative sentiment for the economy.
This event, which is dynamic and has the potential to cause huge market swings on its own, but it happens to coincide with an increase in the Coved transmissions globally, and where a second wave of the pandemic is sweeping across Europe and the United States, where last week 70,000 cases of the infection were reported in a single day.

It also coincides with the United Kingdom, Germany, and France initiating lockdowns for their peoples to try and contain the virus. As if that wasn’t enough to contend with, financial traders have to keep an eye on the Brexit future trade deal negotiations, which are a critical junction, with just a few days remaining to allow the United Kingdom and European Union to agree on a tariff-free future trade deal. If they are unable to do so, the United Kingdom will exit the transition period at the end of December without a formal trade deal with its European friends, and this, coupled with the economic situation unfolding due to the coronavirus, will be seen as a boot on the throat of the ailing British economy, which is struggling because of the ongoing Covid crisis.

And if you have been looking at your economic calendar for the forthcoming week, the sea of red, in terms of high impact events, continues on Thursday with the Bank of England interest rates decision and the United States federal Bank interest rate decision also compounding nervousness for the jittery markets.
And as if it needed a cherry on the top, on Friday, the US non-farm payrolls for October numbers are released. Historically a huge market-moving event could cause spikes as volumes lessen due to risk and where this would impact liquidity, causing wide spreads.
The best thing is to trade with tight stops, expect the unexpected, and even better still, sit back if you don’t need to trade and watch this incredible week unfold.