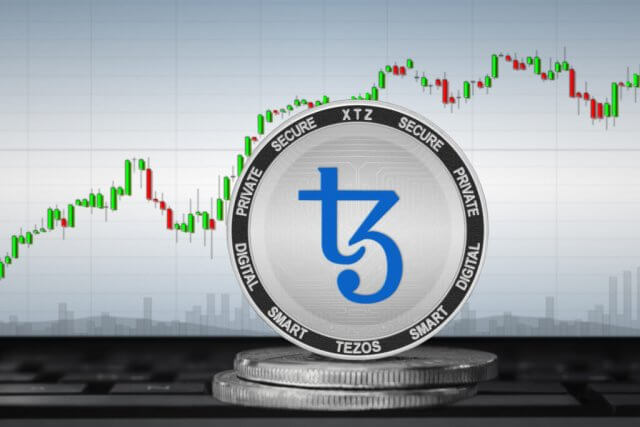 Smart contract safety, long-term upgradability, and open participation: these are the problems Tezos promised to solve when it was created in 2018. So, the developers built the network to facilitate peer-to-peer transactions and launch smart contracts. Behind the network sits the Tez (also called Tezzie) digital token, which is the focus of this article.

If you are familiar with Ethereum smart contracts, you might already understand Tezos’ offering. However, the slight difference between smart contracts on these two networks is that Tezos allows participants to directly control the network’s rules. This makes Tezos not just a re-invention of the Ethereum wheel but a rather more flexible and scalable platform for implementing smart contracts.

Tez can be considered a major crypto. By market capitalization, it ranked #19 at the time of writing. It’s availability in multiple exchange pairs and listing on major exchanges indicates that it is a popular asset among investors.

This article will look at what it is like investing in Tez and answer questions such as is it a good investment.

What is Unique about Tezos?

One of the things that make Tezos unique is its proof-of-stake consensus. Unlike Bitcoin, consensus on the Tezos network is achieved by stakers, whose mining power depends on how much Tez they hold. Relying on this consensus mechanism might have given the crypto some resilience against the cryptocurrency bear market of 2019. Between October 2019 and February 2020, the crypto recorded triple growth. This is a remarkable movement – at the time of writing this, even Bitcoin, in its current biggest bull run yet, has not attained triple growth.

Tezos is known for euphoric investment. During its ICO launch, it raised $232 million, one of the biggest ICOs at the time. Well, in 2020, the crypto has shown similar tendencies – fluctuating between less than a dollar and $4. Such volatility has only been shown by a few cryptocurrencies. Again, we must acknowledge how large these fluctuations are. Despite the relatively low price, the percentage changes are tremendous.

Tez was trading at roughly $1.3 at the beginning of 2020. By mid-February, it had rallied to trade at $3.7. Prices soon crashed to lows of $1.3 a month later. Between April and July, Tez demonstrated rare stability exchanging at about $2 and only fluctuating slightly. In August, the crypto experienced its largest spike of the year, and at some point, fetched a whopping $4.2 at exchanges. The prices have since dropped to $2, which so far seems like its point of equilibrium.

24-hour trading volumes for the crypto indicate drastic changes in investor activity. There was only 30 million worth of trade per day as the year opened, but by mid-February, this number had increased 10-fold. By mid-August, the volume was 20 times. Even when the prices dropped to the $1.3 figure witnessed at the start of the year, 24-hour trading volumes never declined below $70 million.

The volume of trading exhibited by Tez shows how enthusiastic investors have been with this crypto. Coupled with its relatively high volatility, we can conclude that Tez has been the perfect asset for short-term trading, at least according to investors’ 2020 trading patterns.

The Future of Tezos

We have seen that, due to its volatility and high trading volume, Tez performs impressively in the short term. For investors who seek to grow their investment in the long term, questions on Tez’s suitability still persist.

Tezos had a promising start right from its introduction to the initial coin offering. As earlier mentioned, the crypto raised one of the highest amounts ever raised in a cryptocurrency ICO. The faith investors have placed on the crypto from the start indicates its potential and guarantees some level of support for its growth.

Tez has also shown tremendous resilience in the past. After the successful ICO, legal disputes delayed its launch for almost a year. Even so, when it finally launched in 2018, investors had not lost faith in the project – which can be proven by how fast it rallied to reach triple gains. Tezos’ market rank is another indicator of its resilience and aggressive growth. For a crypto that is only 2 years in the market, claiming a position among the top 20 cryptocurrencies is no mean feat.

These past indicators describe a crypto with a solid foundation, good reputation, and the community support needed for future growth.

Adoption in The Banking Sector

The network’s flexibility and scalability also imply that we will see new use cases regularly. In 2019, barely a year after Tezos was launched, BTG Pactual and Dalma Capital (both are reputable investment banks) announced that they will be using the Tezos blockchain for security token offerings (STO).

Tezos adoption in the banking sector is also likely to increase, particularly due to its security. Least Authority, an esteemed security auditing company, released a report affirming that ‘Tezos protects against chain reorganizations and selfish baking.’ Such approvals will go a long way in promoting the crypto’s adoption in the financial sector.

Tezos’ designers spent a lot of thought on the network’s stability. Unlike most crypto, Tezos has an advanced infrastructure that is not prone to hard forks. Users can vote on proposals to upgrade the protocol on the main blockchain. Through a process known as baking, users stake an amount of XTZ to participate in the voting process. Changes to the protocol become effective only after they have been backed by a super majority. This form of governance ensures the network is ‘built to last.’ As an investor, you will be protected from the uncertainty that comes with hard forks and the subsequent possibility of making a loss on your investment.

Is it Risky Investing in Tezos?

Cryptocurrencies are inherently risky investments. Tezos appears as a stable, secure, and well-governed blockchain. However, the currency faces the same volatility and speculation that all other cryptos face. No matter how lucrative Tezos might appear, the golden rule remains, never risk more than you can afford to lose.

Investing in Tezos can be an exciting experience – you can quickly gain or lose, and by high margins. The currency’s relatively high volatility makes it a particularly suitable asset for short term investment. In the long term, Tezos looks equally promising. It is secure, stable, and reliable. These characteristics position the crypto strategically for widespread adoption in the mainstream financial sector. The network’s immunity against hard forking is a guarantee of stability against hard fork uncertainties. While Tezos is a good investment, it is still risky due to the virtue of being a cryptocurrency. Therefore, it is best to exercise caution and avoid hype when making the decision to invest in Tezzie.