One of the best-known indicators in the Forex market is the Parabolic SAR indicator. This is because it tells us when the momentum is changing, arriving early when the momentum changes can give you a winning advantage. SAR means to “stop and reverse” by definition. However, there is another way to use the Parabolic SAR, apart from trying to identify trend changes, either in the short or long term, and it is intended to use the indicator as a form of use of dynamic stops loss, either for a partial or total output.

What is the Parabolic SAR?

The Parabolic SAR formula was developed during the boom days of technical analysis in the 70s by Welles Wilder, who is the person who also designed the Relative Force Index (RSI). The relative strength index is pretty much the only Forex indicator that can produce a winning advantage on its own, so it’s worth taking a look at anything written by Welles Wilder.

The idea is that “time is our enemy” and that the best of any directional movement where we can be is in the part where the momentum keeps increasing. Thus, it is better to use this indicator in commercial trends or in strong directional movements. In fact, Wilder recommends using the Parabolic SAR indicator along with its ADX (Average Directional Index), which is also recognized as probably the best and most useful Forex indicator.

Parabolic SAR is an extremely simple “binary” indicator and is often used in forecasting and trading strategies in the following ways:

-Determination of the trend. When a new candle is opened and the indicator prints its point on the other side of the candle from where it was on the previous candle, this indicates a change of trend and a possibility of entry into a trade.

-In determining the trend as indicated above, use the ADX indicator to determine whether the trend is powerful enough to have a justification for a new commercial entry, always in the direction of the trend.

-When a certain number of candles have been making new lows or highs with the indicator point always remaining above or below each candle, use the point price (or one near it) as a manually adjusted stop-loss (i.e., a dynamic stop loss) to signal an exit from a trade. 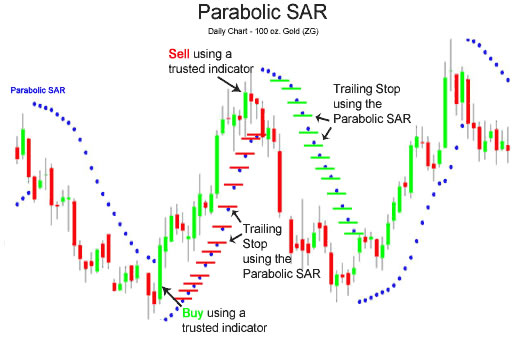 The Best Way to Use the Parabolic SAR

I think the best use of the Parabolic SAR indicator is like a trailing stop when it comes to operating in a strong directional movement. I don’t think it has a great value to determine when to enter: entering the trend direction in Forex is best determined by the break or, usually, better yet, by moving the signals from triple moving average crosses.

Trying to capture only movement 1 is usually not very profitable in the long run. A better trading strategy is to take partial gains when movement 1 ends, letting the rest of the position run in the hope that movement 2 will take place. Successfully capturing movement at 1 can give you the “take off” necessary to enter the trade at a good entry price that is sufficient to capture movement 2.

In the formula Parabolic SAR, the Sarn is the current period and as +1 indicates, the Sarn + 1 is the value SAR of the next period. During an upward trend, the PE is the highest price on the trend, which would be the highest of most candles or bars on the trend. On the other hand, you can be quite sure that the EP would represent the lowest candle or bar in a downward trend. Since parabolic SAR points only appear above or below the price, it is not a difficult task for you to identify what the PE value represents.

The most important variable in parabolic SAR adjustments is α, which represents the acceleration factor in the formula. When you try to add the parabolic SAR indicator in the graph, your graphics package would normally set the value of α to 0.02.

For example, in the Tradingsim, it can reproduce the price action with different SAR acceleration factors to find the optimal value and test the market to see if the new value makes a major difference in the generation of parabolic SAR buy signals or Parabolic SAR Sell signals. If you see a positive result, you must customize the SAR formula to fit the share price feature of the share.

One of the best things about this indicator is that it is extremely easy to use and does not really require any concern on the part of the user with regard to input values. The default values are perfect. One method is simply to manually adjust the stop-loss price to place it a few pips just beyond the indicator point as each new sail opens. A second option may be to wait for the candle to reverse and close beyond the point. This will most likely contribute to you getting better results in the long run.

Remember that your own calculations on any strategy you are using should be moved to the image. Let’s take an example, if you what you expect make a 50% commercial exit at a risk-reward ratio of approximately 2:1, and get an output signal at 0.5:1, which is far from that desired target, you would best ignore the output signal, or maybe move the stop loss to the balance point.

Warning: Only Use With Trending Markets

There are different ways to know for sure if a market is on a trend, but the Parabolic SAR indicator provides good visual aid. If the graph shows that the indicator is changing the point only occasionally, and fairly long chains of consecutive candles with all the points on the same side, then the market is “swinging” enough to give your operation a good chance of making a profit. If the dots are not in a series and are all displayed mixed, then it is a hectic market and it is probably best to avoid it.