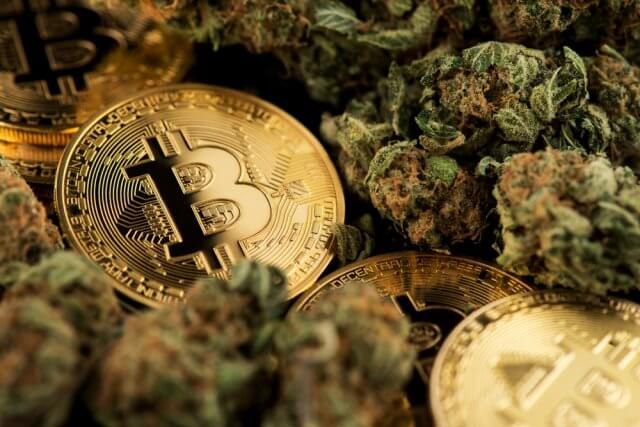 Since the development of cryptocurrencies, the legal cannabis industry and the cryptos have seen to be building a relationship. And that’s because they share quite a lot of stuff in common. For instance, both operate in legal terms, at least in the United States. They have bound to the same challenges in the regulatory, financial, and political domains. In fact, most people involved in the cannabis industry also overlap with the cryptocurrency industry.

Keeping in mind the analogous nature between the two industries, let’s see how they would work if we were to blend them together.

Cryptocurrency and its Difficulties

Since the launch of cryptocurrencies, there have been several issues in adopting it. Though it has numerous benefits when compared to the traditional currencies, the government and the mainstream public are still timid in using it like any other fiat currency.

Having said that, there are a few government regulatory bodies that efficiently approach the cryptocurrencies. There are even some ventures that trust them and find them safe to be stored. The reason for it could be accounted for its current volatility. However, it ends up being in a vicious cycle. The acceptance of cryptocurrency by the merchants is the most challenging part because they are aware of the number of users who are handling them, which is why cryptos have still not practically come into the real business.

The Challenges in the Cannabis Industry

The pot industry, just like the crypto industry, is in the same boat. Both are not illegal but are still problems to become completely legal. Now, for instance, let’s consider only those areas where the cannabis is completely legal for business. That is those states where marijuana is legal and recognized by the US government.

But, with all the support and permission from the government, but it still faces significant challenges. There are only a few banks that offer credits and loans to marijuana manufacturers due to the legality issues it faces and the newness of the market. Now that we know both the industries lie in the same plane, let’s combine them and see its effects.

Cryptos Collaborating with the Cannabis

In consideration of the exclusive features offered by cryptocurrencies, there is great potential for crypto to collaborate with the marijuana industry. With the blockchain technology, the industry is offered with payment method who find the traditional system unsecured as mentioned by Satoshi Nakamoto on the whitepaper that cryptocurrencies backed with blockchain clear out all third-party intermediaries and provide a one-to-one secure transaction between the sender and the receiver.

The association between the two might look like a bizarre match, but in reality, they go hand in hand. Cannabis can use the blockchain technology as a store of value and also as a main source for medium for transactions. As it eliminates the intermediaries, the handling of cash becomes much easier and efficient.

There are several projects that are being laid based on the idea of utilizing blockchain in the Marijuana industry. The growth of these coins happened in 2014. The most reliable and popular ones include:

Having said that, none of them have achieved widespread adoption yet. The basic use case of all the coins is the same – enabling marijuana distributors, and related industries with a common medium of exchange. Both cannabis and cryptos are not entirely legal in almost every part of the world. However, the blend between the two has definitely made things better, at least in terms of security in payment.