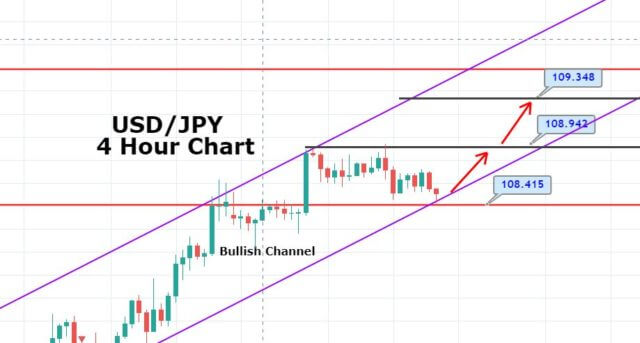 Brexit developments left a positive sentiment on the market, and the investors got encouragement from the progress between Turkey and Syria wherein the ceasefire was formed by the United States announced by the VP Pence in a press conference during the United States session.

However, third-quarter earnings statements were the main focus that raised the benchmarks, and subsequently, the Dow Jones Industrial Average, DJIA, ended with an increase of approximately 26 points, or 0.1%, near 27,028. Consequently, the safe-haven currency Japanese lost its haven appeal despite US September industrial production came worse than expected. The figure fell by -0.4%m/m against estimates of -0.2% while August was revised to +0.8%m/m from +0.6%m/m.

As for yields, the United States 2-year treasury yields increased from 1.58% to 1.64% due to the Brexit headlines then fell back to 1.60%. Markets are still expecting 20-basis-points of a rate cut at the 31 October meeting and a terminal rate of 1.24% against1.88% currently.

Japanese inflation data for September reported with the headline Consumer Price index in at 0.2% Year over Year (YoY) vs. the expected 0.2% & prior 0.3%.

On the 4 hour chart, the USDJPY is trading bullish above 108.400, and above this, we can expect the USD/JPY to go after 108.900. It’s the bullish channel, which is keeping the safe-haven pair supported.

In the case of a bearish breakout, the USD/JPY pair can drop towards 108.000 level. Therefore, the traders may consider staying bullish over 108.400 and bearish below the same to capture quick 30/50 pips on either side.
All the best!