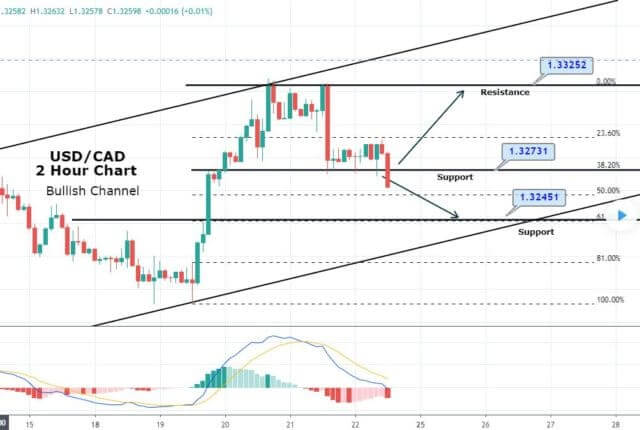 The USD/CAD closed at 1.32846 after placing a high of 1.33249 and a low of 1.32694. Overall the trend for USD/CAD remained Bearish that day. Last month, the Central Bank of Canada held its Interest rates at 1.75% as expected and left the door open to a potential cut in later months. The Bank of Canada has not changed its monetary policy since October 2018, even its counterpart Banks, including the Federal Reserve of United States, has lowered its interest rates.

On Thursday, Stephen Poloz, the Governor of Central Bank of Canada, said that Canada’s monetary conditions were about right in the current economic situation, which has been challenged throughout by global trade tensions. He added that the central bank of Canada was watching whether the trade uncertainties affect the confidence of the economy in order to decide its future plans. In his views, the monetary conditions were about right in given situations.

He also compared the Canadian economic state with American and said that Federal Reserve cut its rates three times and was now down to where the Canadian rates were. He further added that Bank of Canada was concerned that the Canadian economy relies heavily on exports, and the global trade disputes, including the US-China trade war, were affecting it.

Stephen Poloz also mentioned about the new models that Bank of Canada was built on understanding the significant consequences climate change could impose on financial stability. The positive comments about the Canadian economy from Poloz gave strength to the Canadian Dollar and weighed on USD/CAD prices on Thursday.
On Data front, the ADP Non-Farm Employment change from Canada came in as -22.6K against the previous 25.7K.

Furthermore, the Crude Oil WTI prices rose on Thursday amid the hopes of OPEC cut extension and supported the rising Commodity Linked Currency – Loonie, which added in the Bearish trend of USD/CAD.

The downward trend of USD/CAD was also supported by the weak macroeconomic data from the American side on Thursday. At 18:30 GMT, the US Unemployment Claims for this week exceeded the expectations of 215K and came in as 227K and gave pressure to US dollars. At 20:00 GMT, the CB Leading Index came in as -0.1%, which was as expected. The Existing Home Sales also gave pressure to US Dollars when it came in as 5.46M against the expectations of 5.49M.

Besides, the Canadian retail sales data has just come out, and it may drive sell-off in the USD/CAD pair in the wake of optimistic data. Retail sales surged by 0.2% vs. a drop of 0.1% during the previous month.

Technically, the USD/CAD has a complete 38.2% retracement at 1.3274, but the MACD histogram is holding below 0 levels suggesting further selling bias. The bearish breakout pattern can trigger a sell-off until 50% and 61.8% Fibo level of 1.3260 and 1.3240 level. Let’s consider staying bearish under .13293 level today. All the best!