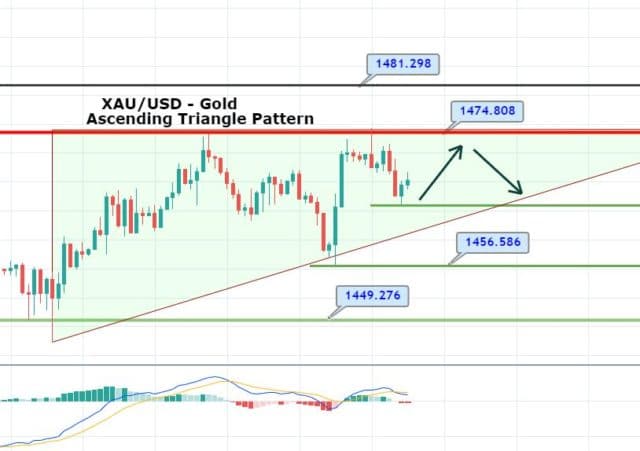 On Tuesday, gold slid erasing profits from 1,470 t0 1,464 level earlier in the session, as a temporary respite from Washington for China’s Huawei increased confidence for a trade agreement between the nations and increased risk sentiment.

The yellow-metal prices dropped during the last week mainly due to the Commerce Secretary Wilbur Ross and White Hosue’s economic adviser Larry Kudlow hinting that the United States and China were close to signing the deal. That sent the three major stocks indexes to record highs on Wall Street.

On the other hand, Donald Trump met with Federal Reserve Chairman Jerome Powell and Treasury Secretary Steven Mnuchin at the White House overnight to discuss the economy and the greenback weakness.

Powell’s remarks were consonant with his statements at his congressional hearings last week the Fed said in a statement released after the meeting. In contrast, the United States President Donald Trump said the meeting was “very good.”

Risk appetite was shaken due to the news that Trump and Fed Chairman Powell had met to discuss the tendency of the dollar. There were rumors of a CNBC report that Chinese officials were involved over prior comments concerning tariffs from Trump.

Gold is trading at 1,468 level, bouncing off above 1,464 support level. On the 4 hour timeframe, it has formed an ascending triangle pattern, which is extending its resistance around 1,474. While the bullish trendline is likely to support the pair around 1,464 level.

The recent bullish closing above 1,464 level is suggesting the market to retrace back upward until 1,472 level. While on the flip side, a bearish breakout of 1,464 can lead gold prices towards 1,456.