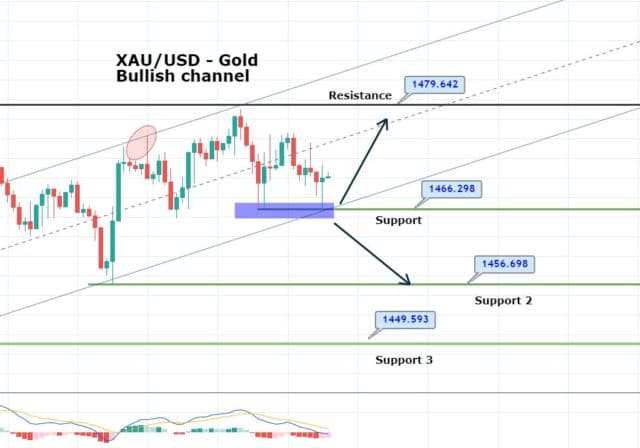 On Thursday, the gold prices y eased from the last session’s two-week high after a report that China has invited top U.S. negotiators for a new round of face-to-face talks, and is seeking to reach a primary trade treaty with the United States.

Safe-haven demand is also dominating the market as it was further disturbed after the U.S. Senate passed a bill against China and in favor of Hong Kong on Wednesday. Both the U.S. House and Senate signed the Bill via a veto-proof majority.

According to the act, annual certification of Hong Kong’s autonomy would be required, and punishment will be imposed on Beijing against suppressing protestors. China demanded the United States to stop interfering in its internal affairs and said that it would retaliate.

Later, on Wednesday, FOMC October’s Meeting minutes were released and showed that there would not be any further rate cut this year.

The holding of monetary policy and rate cuts by federal reserve was already expected, so it didn’t make much impact on the precious metal gold.

Minutes revealed that most officials of Federal Reserve were against the 4th rate cut this year. Some officials supported rate cut but also said that it was a close call.

Officials were concerned that some banks had decreased the capital buffers when they should be rising. Minutes also revealed that risks to the economic outlook remained tilted to the downside. Many officials said that rate cut was warranted due to global weaknesses and trade uncertainty.

On the technical side, gold prices are trading within a bullish channel, which is supporting the XAU/USD above 1,466 level. The MACD and RSI are holding below 0 and 50, respectively, suggesting changes of a bearish breakout. If this happens, gold prices may drop further until the 1,456 level. Therefore, consider taking sell positions below 1,465 level today.
cript>