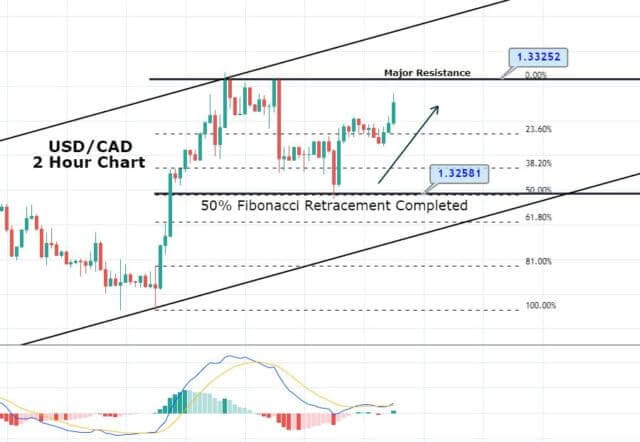 The Stronger than expected Retail Sales & Core Retail Sales data from Canada gave the impression of a robust Canadian economy in this time of global slowdown. The stronger Canadian Dollar pushed USD/CAD prices to the low of 1.32524 on Friday.

However, the pair USD/CAD got support from Strong US Dollar on Friday after the release of PMI from the United States. At 19:45 GMT, the Flash Manufacturing PMI of the United States showed an increase to 52.2 from the expectations of 51.5 for November. The Flash Services PMI was also increased to 51.6 for November from October’s 50.6.

Stronger than expected PMI was very beneficial in raising the dropped USD/CAD on Friday. However, the upward trend for the pair continued and was further supported when the Consumer confidence from the University of Michigan was seen as favoring the USD. At 20:00 GMT, the Revised UoM Consumer Confidence Sentiment also raised to 96.8 from the expectations of 95.8.

The Crude Oil prices on Friday also dropped due to increased selling pressure by profit-taking activities of the traders who bought Crude Oil after the news of OPEC cut extension on Thursday. The fall in crude oil prices pressed the Commodity-linked Loonie, and hence, USD/CAD was further raised to place a high of 1.33014 at the ending day of the week.

The commodity currency USD/CAD has completed 50% Fibonacci retracement at 1.3258. On the 2 hour graph, the pair has closed bullish engulfing candle, which is signaling bullish bias among traders.

For the moment, the USD/CAD is facing strong support at 1.3290, along with a resistance at 1.3325. At the same time, the pair is also trading in a bullish channel, which is keeping the USD/CAD trading sentiment bullish.