What to expect in the Forex space when Trump leaves office

Thank you for joining this Forex  Academy educational video.

In this session, we will be looking at the potential key moves in the forex space with Donald Trump leaves office in a few days’ time.

History will look back at Donald Trump’s presidency, and it looks like historians will likely give him a good kicking.

But, if we hark back 12 months, pre-pandemic, unemployment in the United States was at a record low, the gross domestic product was high, US stock markets were at all-time record highs: The United States economy had never been fitter, thanks to having him at the helm.

Donald Trump’s style of presidency will be seen as abrasive and belligerent. But we have to remember he was not a politician to start with. He was a tough businessman with a no-nonsense attitude, and that’s why people voted for him to become president in the first place. It was a poke in the eye for the political elite in an attempt to bring back wealth for ordinary people. It was his lowering of corporate taxation and red tape and policies to bring back manufacturing to the United States that lifted the US economy to retain its rank as the most powerful nation on the planet.

But, when push came to shove, Donald Trump fell on his own sword because of his mishandling of the coronavirus pandemic.  The bottom of his presidential world fell out because he buried his head in the sand and ignored all the warnings about the horrendous covid disease.  His lacklustre attitude, and slowness to respond to the crisis, created friction at every point between the democrats and republican parties instead of trying to pull both sides together for the sake of the nation, which did nothing to help while the economy as it  faltered with mass unemployment and the sharpest decrease in GDP in US history.

Financial traders won’t miss him; his use of Twitter affected the financial markets without warning, creating huge swings in stock indices, bond yields, and the forex space, only for him to reverse many of his Twitter comments later, creating more mayhem while commenting on highly sensitive foreign and economic policy decisions he planned to implement, while he fed such information into the market with no warning or embargo.  Many would say good riddance and be happy to get back to the old style of governance under a lifelong politician, Joe Biden.

Some analysts predict that President Trump will try and upset the apple cart before he leaves office, while the Democrats are threatening to impeach him and have him removed, the timing would suggest this is impossible with just 10 days until he leaves office, at the time of writing.  But it is said that fellow republicans are side-lining him with regard to policy decisions and are trying to keep him at arms-length until he has gone.

Throw into the mix US stock markets at record highs, due to what they currently see as the new president having more clout due to the democratic party holding more power in Congress after the recent runoffs in Georgia, to be able to bring in more covid stimulus aid packages and roll out vaccines across the United States. 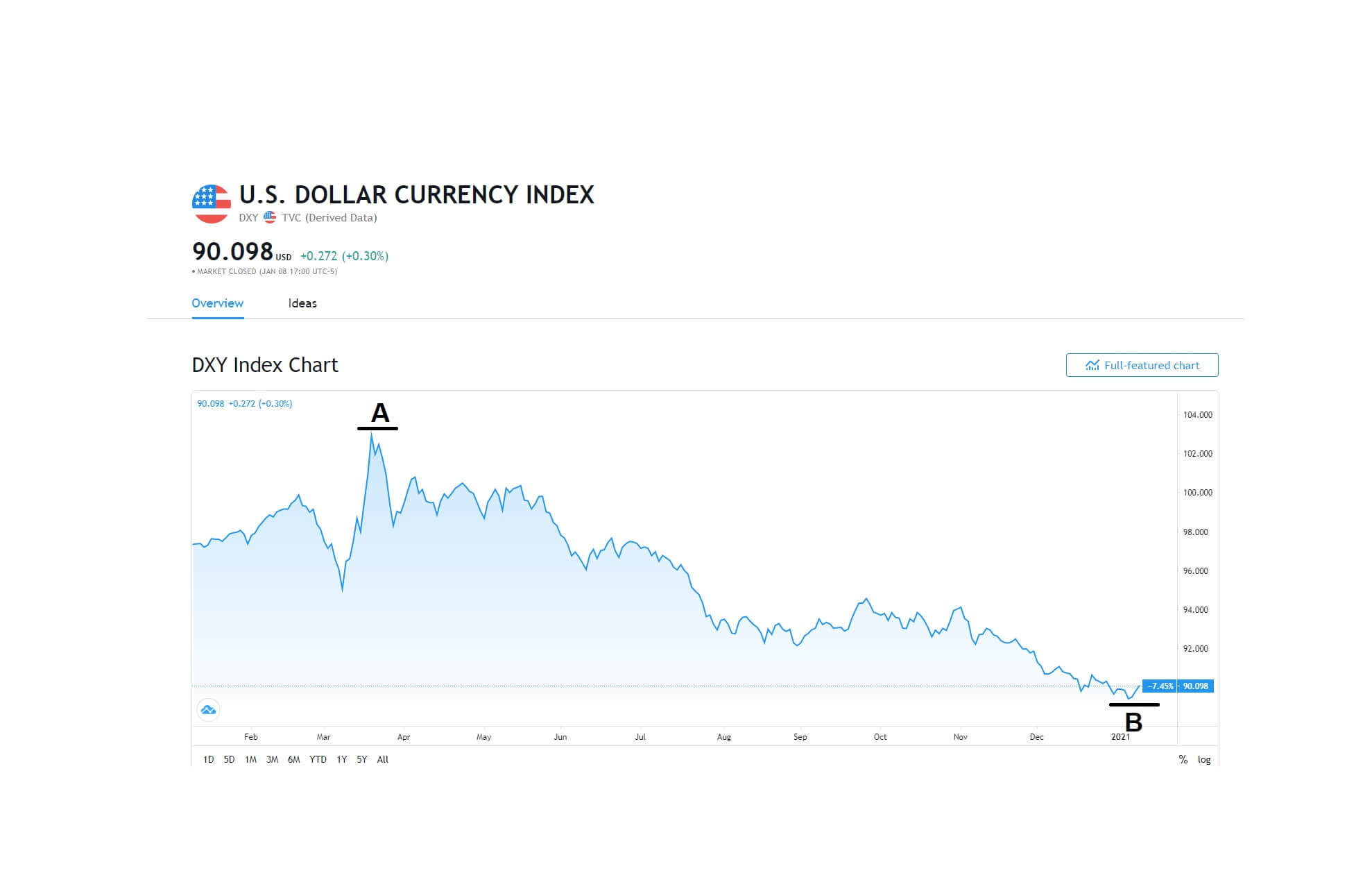 Certainly, the dollar index – seen here – seems to be trying to fight back to the 91.00 level at the time of writing, having almost hit 88.00 in the last few days at position B, having fallen from its high in march at position A of 103.00.  does this mean that the rot has stopped?  Possibly not, but with a president on the way out and a new one on the way in, we can certainly expect the unexpected. 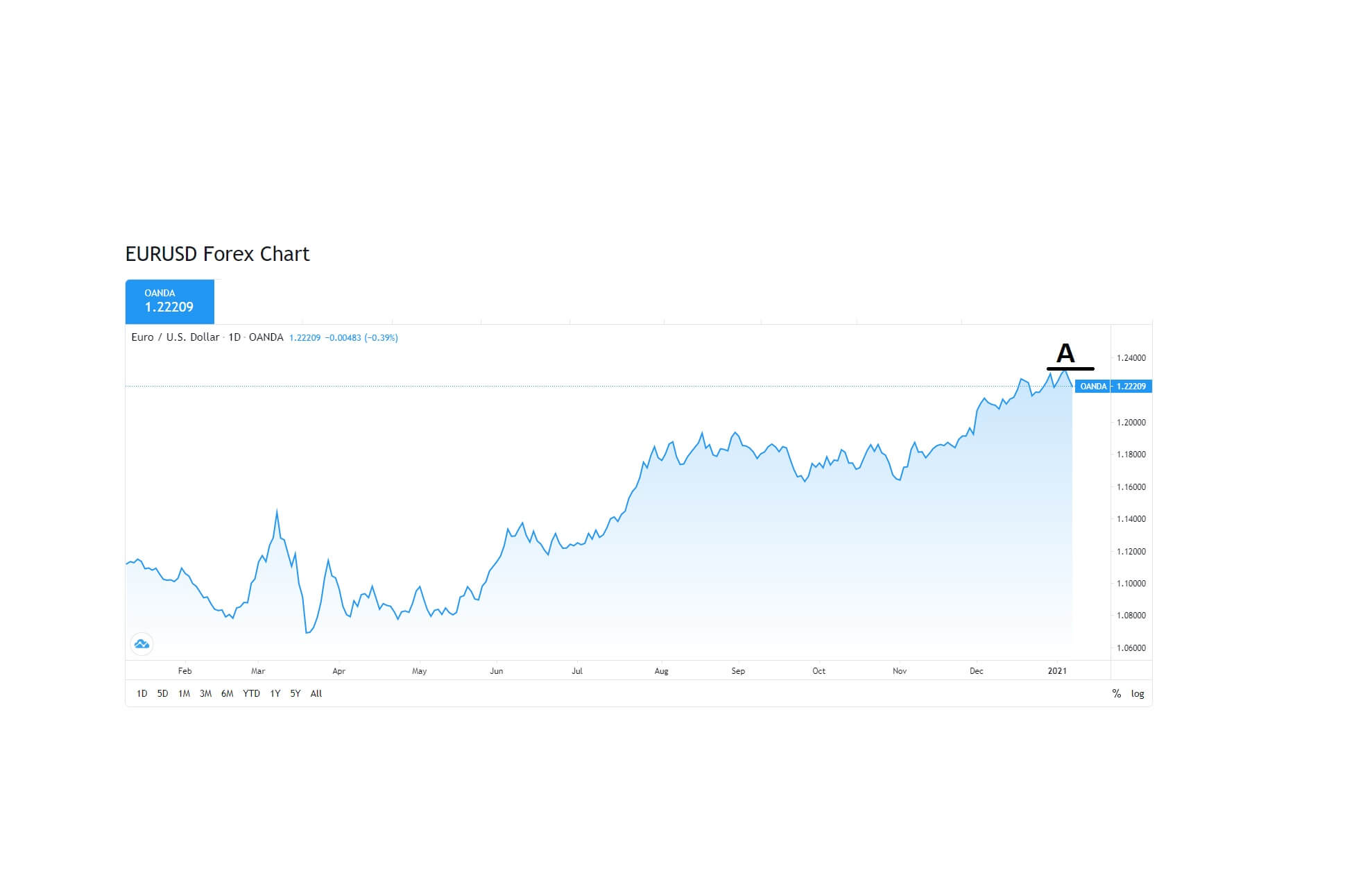 This might mean that the Eurodollar pair, which has been riding high, will take a breather, having found resistance at 1.2330, shown here on this daily chart at position A 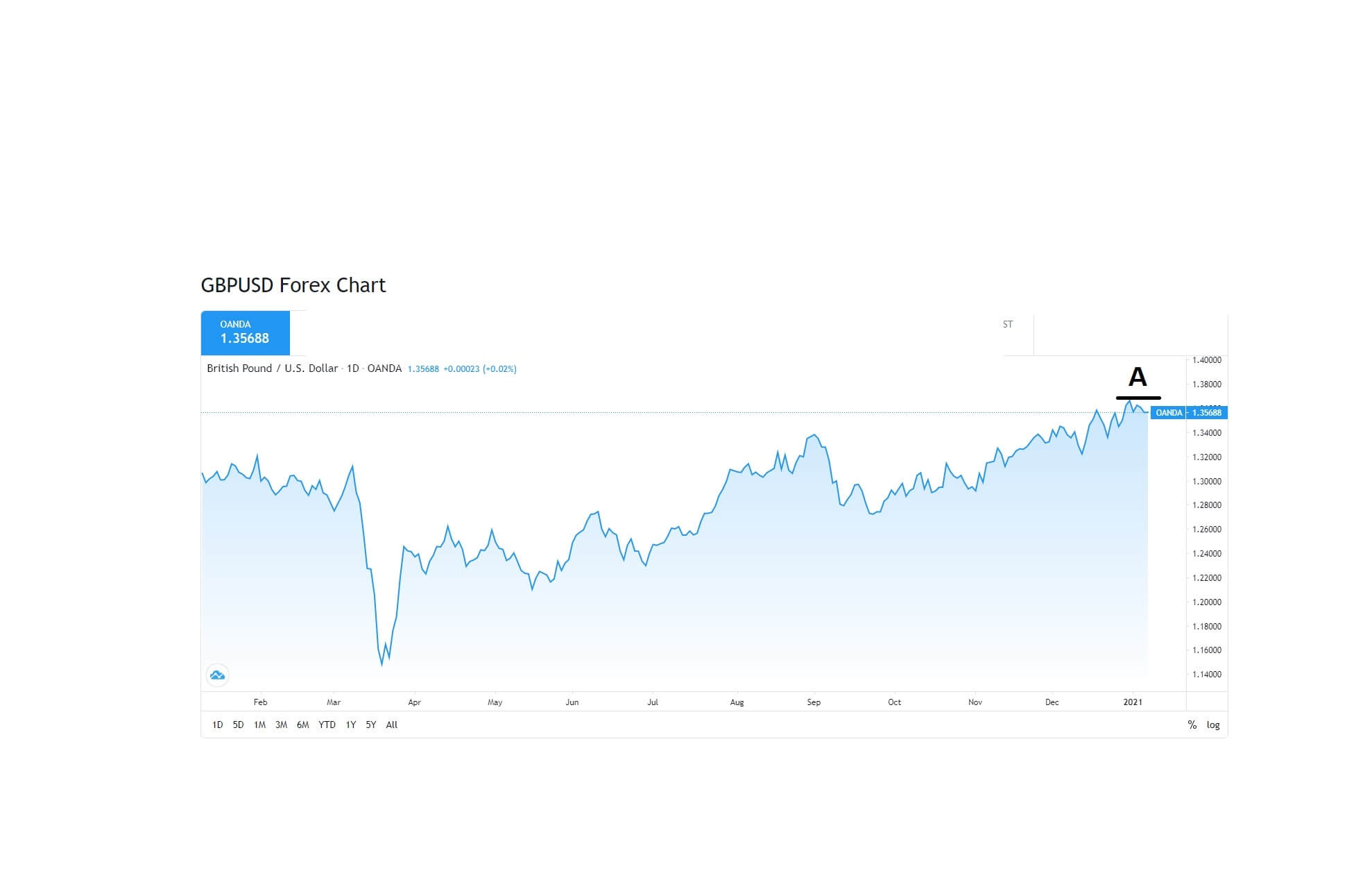 And with cable failing to reach the key 1.3700 on this daily chart at position A,  this might also be a reason why the markets are taking a breather from shorting the US dollar.

In conclusion, expect the unexpected, expect volatility, and expect the fundamentals to take a side-line while the US transition between presidents is over and new policies are implemented by the incoming democratic party.