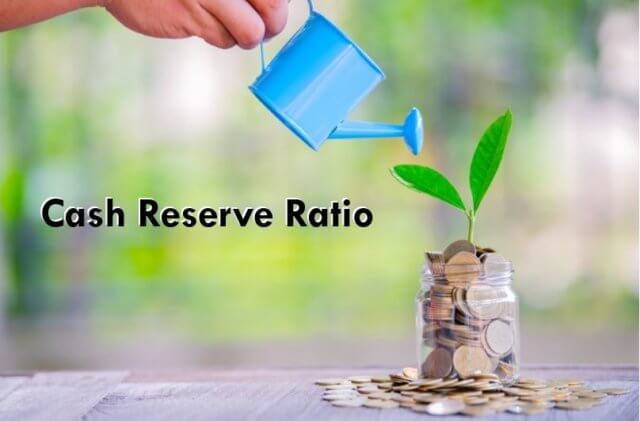 The cash reserve ratio (CRR), also called the reserve ratio, is the minimum amount of deposits of the clients that are to be held by the commercial banks as cash or deposits with the central bank of the country. It is expressed in terms of a percentage. However, the rest can be used for investment and lending purposes. This is primarily done for two reasons; one, to maintain liquidity in the banks, and two, to not let the banks go bankrupt when they need to pay their depositors when demanded.

How is the Cash Reserve Ratio Calculated?

Bank Deposits is the Net Demand and Time Liabilities (NDTL), which is the deposits made by the customers into commercial banks.

To understand this clearly, let’s take an example. Let’s say a depositor deposits the US $5000 into his bank account. This amount is referred to as Net demand and Time Liability (Bank Deposits). Also, consider the reserve ratio (reserve requirement) to be 6%. Now, the bank will have to hold 6% of the depositor’s amount (the US $5000) as reserves; that is, US $300 is given to the central bank as cash reserves. The leftover amount (US $4700) can be used for investment as well as for lending loans. If we were to assume that the lost out of $4700, then the bank will have will still $300 safe with the central bank.

The Measure and Impacts of Cash Reserve Ratio

The Cash Reserve Ratio is an important tool in the monetary policy. As its primary use, the reserve ratio is used to control the money supply of an economy. It also regulates inflation rates and keeps in the liquidity flowing in the markets.

The CRR is the part of deposits of the customers that are held by the central banks. Now, if there is a decrease in the CRR, the amount held by the central banks is lesser, which implies that the commercial banks will have more amount in their hands. In such scenarios, the banks typically reduce the interest rates on loans they provide. Also, the decrease in the reserve ratio increases the money supply in an economy, and this, in turn, increases the inflation rate.

The implication when the CRR increases is the opposite of the above case. An increase in the CRR means that the amount held by the central banks is higher, which reduces the amount held by the commercial banks. Now since they have less money in hand, they compensate it by increasing the interest rates on the loans they provide. The money supply, in this case, decrease, which drops the inflation rates as well.

Impact of Reserve Ratio on the Currency

Note that, Reserve Ratio or the interest rate for that matter alone does not determine the demand for that currency. There are several other considerations that must be made along with this—for instance, the relationship between interest rates and inflation. Higher interest rates with a decent and feeble increase in inflation can prove a positive effect on the currency.

There are portals over the internet where one can find the historical data as well as the forecast data. One can also analyze them by the different types of graphical representations they provide.

How often is the data released?

The frequency of release of the reports is the same for most of the countries. In countries such as China, Malaysia, Russia, Brazil, etc. the data released every month, while it is released daily in India.

Effect of Cash Reserve Ratio on the Price Charts

Now that we’ve fairly got an idea about the reserve ratio, let’s see how the prices are affected after these reports are out. Precisely, we will see how the volatility of the market has changed as well as the effect in volume.

For our example, we will be taking the Indian Rupee into account to analyze the charts. The frequency of release of data of Reserve Ratio in India is daily. The reports are published by the Reserve Bank of India.

Note that the Cash Reserve Raito data has a feeble impact on the currencies. Since the CRR is indirectly impacted on the currency, the level of impact is pretty low compared to other fundamental indicators such as interest rates, GDP, inflation, etc.

Consider the below announcement made by the Reserve Bank of India. We can that the announcement was made on February 6th at 6:15 AM GMT, and the value reported was 4%, which was the same as the previous month as well as forecasted value.

Now, since the actual values are the same as the previous and the forecasted value, we cannot expect any high volatility or a shoot up in volume as such. However, let’s analyze a few charts and see its impact.

Below is a chart of USD/INR on the 15min timeframe just before the news was released.

Consider the chart of USD/INR on the 15min timeframe after the release of the news. The news candle is represented as well. We can see that the news favored the US dollar but not the Indian Rupee. However, the movement wasn’t as gigantic as such. The volatility was above the average, and the volume was quite low. From this, we can conclude that the reports didn’t have any massive impact on the USD/INR.

Below is the chart of EUR/INR in the 15min timeframe. The news candle has been marked in the box, as shown. We can clearly infer that the news candle barely made a drastic move in the market. Nonetheless, the volatility was above the average mark. So, news traders cannot expect any high volatility during the release of the news. And traders who stay away from the markets during the news can now trade fearlessly as the news doesn’t have a major impact on the currency.

Below is the chart GBP/INR on the 15min timeframe after the release of the news. The news candle is illustrated in the box, as shown. Similar to the USD/INR and the EUR/INR, this pair, too, has not shown any rise in the volatility as such. In fact, the volatility of this pair is at the average line. So, with this, we can conclude that the Cash Reserve Ratio barely has an impact on the currency.

The Cash Reserve Ratio is the amount of money that is deposited by the commercial banks into the central banks. This is primarily done to maintain the volatility in the banks. The reserve ratio is an important monetary policy tool. Moreover, it determines and maintains the interest rates, inflation, as well as the money supply of an economy. A rise or fall in the CRR brings a change in the previously mentioned indicators. Hence, this is a vital and very helpful fundamental indicator for both economists and investors. But comparatively, it is less helpful for the day traders, as the impact is feeble.