Fundamental analysis is the way that traders try to analyse the economic, social, and political events in a country, in order to ascertain it’s exchange rate with another country’s currency. Therefore traders will be interested in the gross domestic product GDP and growth potential of a country, along with other factors such as its unemployment rate, debt, inflation, and monetary policy. In the case of the US dollar and the Euro, in particular, traders will also be trying to gauge the supply and demand of these currencies.
Of course, in the real world, all of these factors are extremely fluid and change constantly, and therefore, traders are continually battling to determine the value of one currency against another; in other words, the currency exchange rates.

Therefore when a country releases economic data, especially interest rate changes, GDP announcements, and in the case of the United States, unemployment changes in the form of Non-Farm Payrolls – which are normally released on the first Friday of each month – these data releases will be greatly anticipated and can dramatically change the value in a country’s currency and thus related exchange rates. Thus we often find dramatic Forex market moves caused by the increased volatility surrounding such events. 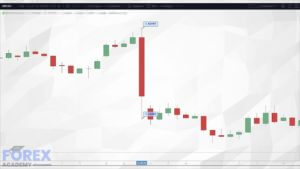 Case study 1: –
On the 23rd of June 2016, the British people voted in a referendum to leave the European Union: Brexit. This sent shock-waves through the financial markets and resulted in the British Pound plummeting in value against its peers.
In the example ‘A,’ we can see a huge, red, bearish Japanese candlestick descending from a high of over 1.50 to a low of 1.32 against the US dollar, during overnight trading, post the referendum result. The subsequent uncertainty regarding this decision caused the Pound against the US dollar – also known as Cable – to fall to a low of 1.19. Indeed we are still seeing extreme volatility due to the fact that, some three years later, this matter has not yet been
concluded.

While many traders correctly predicted that the British public would indeed vote to leave the European Union and shorted Cable, and made a hefty profit as the Pound sank, traders who were ‘long’ of the pair faced huge losses and where Stop Loss orders would have faced immense slippage due to the extremeness of the fall.
In Example B, we can see some of the extreme moves in Cable from a high of 1.50 before the Brexit referendum to lows of 1.19 and swing highs to 1.43 post the referendum.
Obviously, fundamental events like these don’t happen often. However, let’s look at another fundamental event which caused huge market volatility. 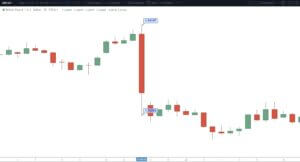 Case study 2: –
The country of Switzerland lies in the heart of the Euro area and does a great deal of international business with Euroland. The Swiss National Bank SNB is responsible for monetary policy for Switzerland but declined to join the European Union, preferring to remain an independent trading nation and retain its own currency: the Swiss Franc CHF.
Because of Switzerland’s geographically closeness to Europe and the significance of trade

reliance, on the 6th September 2011 – due to extreme volatility in the financial markets – the SNB announced it wanted to depreciate the EUR:CHF currency (or to cap it at) exchange rate of EUR:CHF 1.20, so as to remain competitive with regard to trading with the Euro area.
However, on the 15th January 2015, the Chairman of the Board of the SNP, Thomas Jordan unexpectedly announced it was removing the cap. The result in the effective 1.20 peg being removed, without market notice, caused chaos in the Forex market. 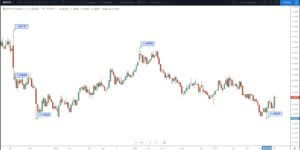 In example C, we can see a huge fall in the value of the Euro to the Swiss Franc from 1.2 to 0.96 on our chart, while some brokers were seeing falls to as low as 0.85. Many hedge funds made huge losses, and individual traders were made bankrupt along with the broker Alpari Trading, who could not cover losses it sustained in the devaluation crisis. Remember, this event was a bolt out of the blue, with many commentators accusing the SNB or gross
negligence.

The upshot is that trading on fundamental news releases can present some fantastic trading opportunities. However, novice traders are strongly advised to stay on the sidelines during these events for the following reasons; 1) Increased possibility of huge fluctuations in exchange rates, 2) price action acting in contradiction to technical analysis. 3) price already factored into fundamental news releases, resulting in little price action movement. 4) market disappointment, resulting in unexpected swings in price action, 5) a lag In price action while markets assimilate data, and where this can often cause price spikes and reversals.
Therefore, unless a trader is highly skilled with regarding to trading on fundamentals only, our advice would be to take note off data releases and then wait until such time as the markets have returned to the normal ebb and flow, and then continue with trading via technical analysis!