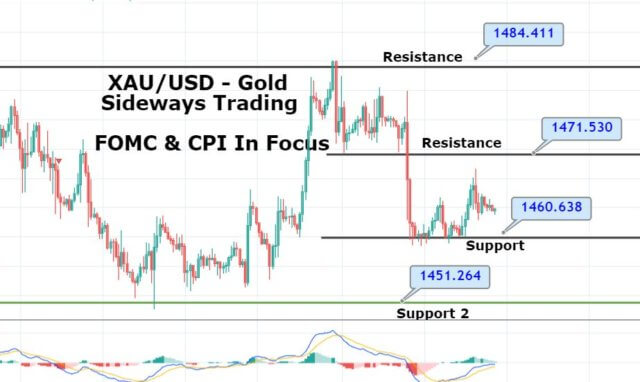 On Wednesday, the price of the precious metal gold moved in a tight range as cautious traders back out from big bets before of U.S. Federal Reserve’s monetary policy statement following in the day and amid an imminent tariff deadline.

The Small Business Index from the U.S. National Federation of Independent Business (NIFB) was released. The report showed an increased figure in the month of November to 104.7 from the expected 103.1, which supported the greenback.

According to the analysis of Chinese & U.S. data, China has bought more U.S. soybeans between September and November this year, giving an excellent gesture to try to reach an initial agreement on trade. The Chinese imports of U.S. soybeans increased 13 times from the previous year’s same period.

However, Chinese officials are hopeful that the U.S. will delay a threatened tariff increase due on Sunday as both countries are focused on the de-escalation of trade tensions. Traders are keeping an eye on a specific move from China or the U.S. in the development of trade deal to react accordingly.

Investors are also waiting for the forecast of U.S. economic growth from policymakers who are attending a two-day meeting of Federal Reserve, which will end on Wednesday. Federal Reserve is expected to hold its interest rates unchanged in this meeting. On Wednesday, the Consumer Price Index from the United States will be released, which is expected to drop to 0.2% from the previous month’s 0.4%.

This week, the precious metal gold hasn’t exhibited major movements as most of the market awaited the U.S. CPI and FOMC figures. Gold is stuck in a tight trading range of 1,467 – 1,459.

On the 4-hour timeframe, gold is forming neutral candles within the same range of 1,467 – 1,459, which is signaling a lull before the storm. Gold is also gaining support around 1,459, and it’s extended by a bullish trendline while the RSI and MACD stay around 50 and 0, respectively.