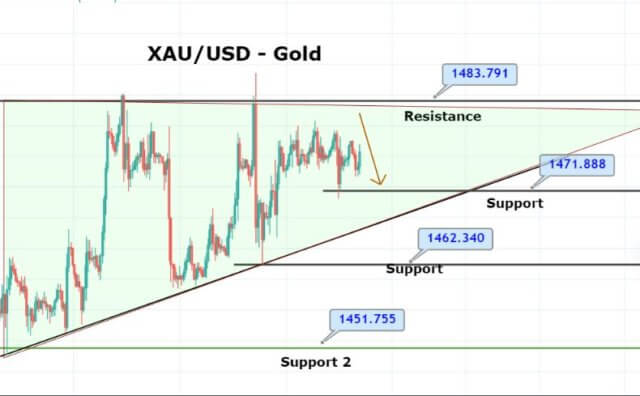 On Thursday, the precious metal gold prices inched up to trade around 1,476 after the U.S. House of Representatives chose to challenge President Donald Trump on articles of misuse of authority and obstruction of Congress.

Impeachment is a two-way process where the removal of a sitting president is decided. In the first stage, the majority of the Democrats will be needed to support the move. If that passes, then a trial would be held in U.S. Senate, which will be dominated by Republicans.

For that, 2-3rd would have to vote in favor, which is highly unlikely to happen. But if it did happen, Donald Trump would be forced from the White House.

The U.S. Dollar Index advanced to a fresh weekly high near 97.50, which also helped gold prices to gain a slightly bullish trend. Lack of any macroeconomic data left the movement of pair XAU/USD dependant on the technical changes and political news.

On Friday, the Bureau of Economic Analysis will publish the Q3 Gross Domestic Product (GDP) along with the Personal Consumer Expenditures (PCE) Price Index.

Technically, the yellow metal gold has extended an ascending triangle pattern, which is holding the XAU/USD sustained above 1,470 level. A bearish violation of this level of 1,470 can drive additional selling until 1,462. However, no vital drift isn’t anticipated until the release of UoM Consumer Sentiment on Friday. On the upper side, 1,480 is likely to be the resistance for gold. Good luck!