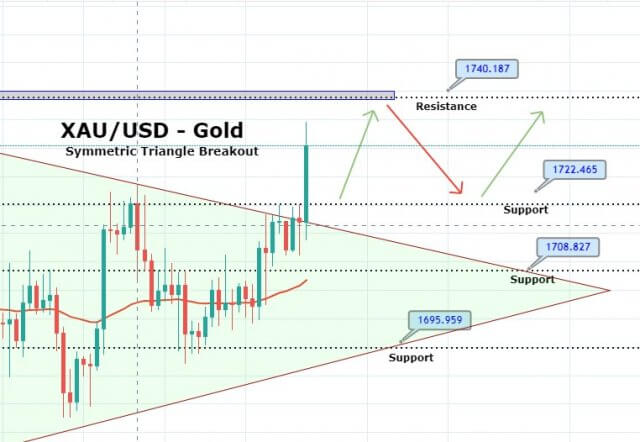 During the early U.S. session, the safe-haven-metal prices extend its 3-day winning streak and rise to a 4-day high level of $1,718.35 while taking rounds to $1,716.50, mainly due to the depressing speech U.S. Federal Reserve Chair Jerome Powell about the economic downturn. Despite the Federal Reserve policymakers’ refusal for the negative rate, the yellow-metal continued to take bids as the U.S. President Donald Trump renewed calls for the negative Fed rates.

The US-China intensifying tension and the risk of coronavirus second wave also weighed on the risk sentiment, which eventually supported the safe-haven assets like gold. At this moment, the safe-haven-metal prices are currently trading at 1,716.21 and are consolidating in the range between 1,711.21 and 1,719.80.

The Federal Reserve Chair Powell said that negative interest rates were not needed yet. In the meantime, the Cleveland Federal Reserve President Loretta Mester said, we cannot consider “negative rates” as an excellent tool for supporting the economy. If talking about Powell’s speech, the Federal Reserve’s chairman warned about the scope and speed of the continuing economic downturn while comparing the recession pace with the World War II recession.

The reason behind the risk-off market sentiment is the US-China tussle. It would be worth mentioning that the recent aggressive words from China came after U.S. President Trump directed the board of Federal retirement savings fund to stop investing in the Chinese stocks.


Recently, the XAU/USD broke out of the symmetric triangle pattern, which was providing resistance at 1,718, and now it’s trading bullish at 1,735. The recent bullish trend in gold came in response to worse than expected Jobless claims data from the U.S. As per the U.S. labor department, the advance figure initial claims were 2,981,000, a drop of 195,000 from the prior week’s updated level is reported. A weaker dollar has triggered the bullish trend in gold, and now it’s likely to lead gold prices towards 1,740. Now, we may see bearish correction below 1,740, while further buying trades can be taken above 1,720. All the best!