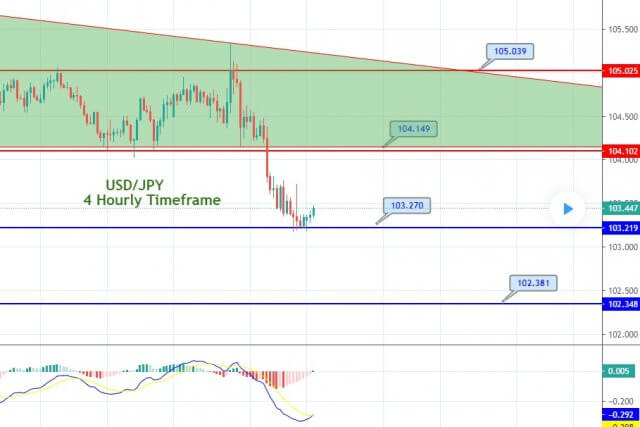 The USD/JPY pair was closed at 103.364 after placing a high of 103.758 and a low of 103.174. The USD/JPY pair was dropped to its lowest since 8th March. The U.S. dollar against the Japanese Yen on Friday dragged the pair to a fresh 8-months lowest level as the chances for Joe Biden to win the U.S. election increases. The USD/JPY pair followed the USD weakness throughout the week and reached the 103 level.

The investors have welcomed a Democrat government’s prospects with a split congress where Republicans can block initiatives to raise taxes or introduce tighter regulations with a risk rally that sent the safe-haven U.S. dollar to multi-month lows against its main rivals.


The USD/JPY has violated the descending triangle pattern at 104.149 area, and on the lower side, it’s testing the support area of 103.270 level. Recently the closing of bullish engulfing patterns may drive an upward movement in the market. On the higher side, the USD/JPY can go after the next 103.850 mark. On the flip side, violation of the 103.215 level can extend selling until the 102.750 mark. The MACD is also showing oversold sentiment among investors; therefore, we should look for a bullish trade over 103.270 and selling below the 103.830 level today.