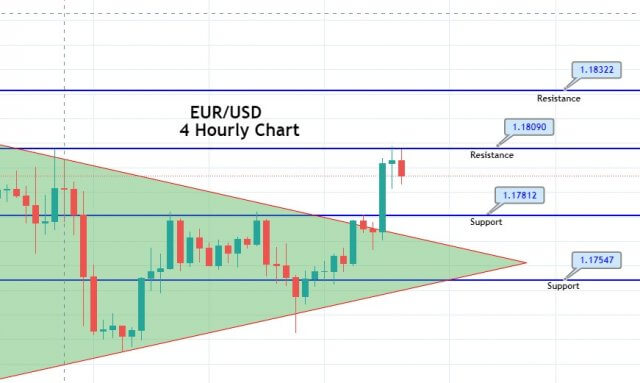 The EUR/USD failed to stop its previous session losses and further offers around below the 1.1800 level. However, the bearish sentiment around the currency pair was boosted after the fresh downbeat released German ZEW headline numbers for October, showing that the Economic Sentiment Index came in at 56.1 against 73.0 expectations 77.4 last. This, in turn, undermined the sentiment around the shared currency and contributed to the currency pair losses.

Apart from this, the reason for the bearish bias around the currency pair could also be associated with the fresh reports suggesting the re-imposition of stricter restrictions in Germany, Spain, and France to stop the coronavirus second-wave. On the flip side, the broad-based U.S. dollar strength, backed by the upbeat market sentiment, also played a major role in undermining the currency pair. At the moment, the EUR/USD currency pair is currently trading at 1.1793 and consolidating in the range between the 1.1779 – 1.1817.

At the data front, the German ZEW headline numbers for October showed that the Economic Sentiment Index arrived in at 56.1 against 73.0 expectations and 77.4 last. Moreover, the currency pair losses were also bolstered by reports suggesting a sharp rise in the coronavirus cases in Spain, France, and German. It is very downhearted headlines that the second-wave of the virus is picking up pace in Europe once again, which leads re-imposition of stricter restrictions in Germany, Spain, and France to contain the coronavirus second-wave.

According to the coronavirus (COVID-19) data from Germany’s Robert Koch Institute (RKI), the country’s cases rose around ~39,000 as of yesterday while the latest update today added 13 deaths more so that brings the total tally to 9,634 persons. This, in turn, undermined the shared currency and contributed to the currency pair.

Apart from this, the risk sentiment has been flashing red since the Asian session started, witnessed by the S&P 500 Futures’ negative performance. However, the reason for the downbeat trading sentiment could be associated with the worrisome headlines concerning Brexit and on-going tension between the U.S. and China. dislike for the U.S. proposal to the Congress about selling three sales of advanced weaponry to Taiwan recently renewed the trade war saga

At the US-China front, the renewed conflict between the U.S. and China fueled after the Dragon Nation China’s Washington Embassy lashed out at the U.S. passage of the three advanced weaponry sales to Taiwan during late-Monday, per Reuters. As per the latest report, China’s representative said, “China consistently and firmly opposes U.S. arms sales to Taiwan.” This, in turn, added additional pressure around the market sentiment.

Across the pond, the recent coronavirus (COVID-19) warning from the U.S. health official Anthony Fauci and stimulus uncertainty also keep the market trading sentiment under pressure. As per the keywords, “Dr. Anthony Fauci, director of the U.S. National Institute of Allergy and Infectious Diseases (NIH), suggests another 181,000 deaths in the United States by February.

As per the latest report, the US Centers for Disease Control and Prevention (CDC) reported 7,740,934 cases of the new coronavirus yesterday, with an increase of 46,069 from its previous count. As in result, the broad-based U.S. dollar remains on the bullish track and still reporting gains on the day. However, the U.S. dollar gains were being supported by the reports suggesting that the U.K. pharma giant, Johnson, and Johnson, stopped its COVID-19 vaccine trial due to an unexplained illness, which eventually boosted the safe-haven assets like the U.S. dollar.

However, the U.S. dollar gains seem rather unaffected by the U.S. political uncertainty ahead of U.S. elections. Thus, the gains in the U.S. dollar become the key factor that kept the currency pair lower. Whereas, the U.S. Dollar Index, which tracks the greenback against a bucket of other currencies, rose by 0.11% to 93.207 by 10:04 PM ET (2:04 AM GMT). Looking forward, the market traders will keep their eyes on the U.S. Consumer Price Index (CPI) data. Furthermore, the risk catalyst like geopolitics and the virus woes, not to forget the Brexit, will not lose their importance.

The EUR/USD pair is supported over 1.1790 level, which marks double bottom level on the 4-hour timeframe. Above this level, the EUR/USD is likely to bounce off until the 1.1811 level, and the bullish breakout of the 1.1831 level can also extend buying until the next target level of 1.1870. Conversely, the bearish breakout of the 1.1790 level can extend the selling trend until the 1.1750 level.