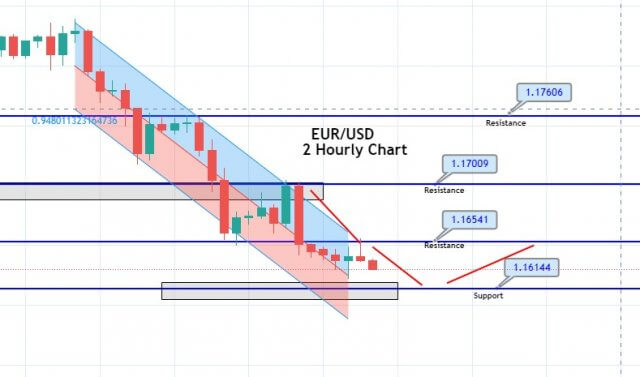 The EUR/USD pair was closed at 1.16445 after placing a high of 1.17041 and a low of 1.16398. The EUR/USD pair extended its losses for the 5th consecutive day on Friday and remained bearish throughout the day. The main driver behind the steepest fall in Euro currency this week was the market concerns about the rising number of coronavirus infections in Europe and the effects of the social distancing measures to curb them.

The latest lockdown restrictions introduced by France and Germany and the tighter restrictions applied in Italy and Spain raised alarms about their impact on the fragile economic recovery and weighed on the single currency Euro that ultimately added pressure on EUR/USD pair.

Furthermore, the European Central Bank hinted to unleash new stimulus measures in December to counteract the pandemic’s negative impact and weighed on the Euro currency that added further losses in EUR/USD pair on Friday.

The EUR/USD traded with a bearish bias, having dropped below the support area of 1.1653. At the moment, the EUR/USD is likely to face the resistance at the same level of 1.1653. On the higher side, a bullish crossover of 1.1653 increases the odds of continuing an upward trend, and it may lead the EUR/USD price towards 1.1700. Further bullish crossover of this area can lead the pair towards the 1.1758 level. Conversely, a bearish crossover of 1.1653 support level has opened additional room for selling until the 1.1613 area as a double bottom support area extends the level.