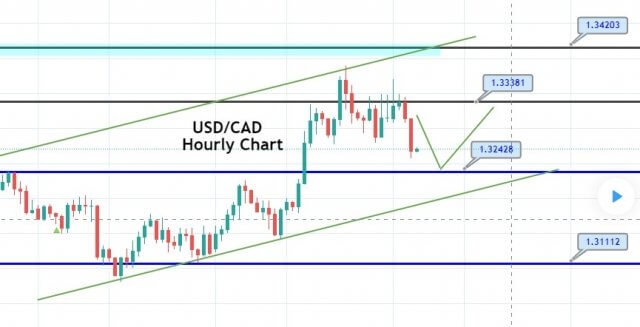 The USD/CAD pair was closed at 1.33219 after placing a high of 1.33483 and a low of 1.32795. On Friday, the currency pair USD/CAD remained confined in a consolidated range throughout the day. The USD/CAD pair dropped in an earlier trading session on Friday amid the strong Canadian GDP and other economic data. However, the pair started falling in late session due to the declining crude oil prices on the day. Meanwhile, the US dollar was strong over the board ahead of the US Presidential elections and the strong macroeconomic data on the day.

Most of the macroeconomic figures from the US came in favor of the local currency that added strength in the USD/CAD pair on the day.

Furthermore, the gains were extended in the late session as the crude oil prices declined on Friday and remained low till $41.0 per day. The declining crude oil prices weighed on commodity-linked Loonie and forced the US dollar to move higher and push the USD/CAD pair. Another factor involved in the upward trend of the USD/CAD pair was the latest decision by the Federal Reserve on Friday to decrease the minimum limit of short-term and medium-term loans to $100,000 from the previous $250,000 to support the small & medium-sized businesses.

The USD/CAD is trading with a selling bias falling from 1.3338 level to 1.3242 level, and it’s pretty much likely to drop further until the next support area of 1.3200 level. It’s the level that’s been extended by an upward trendline. The MACD histograms have also started forming below 0 supporting selling bias in the market. I will be looking to take a buy trade at this level of 1.3200 with a stop loss below the 1.3165 area and take profit level of 1.3340 mark. Good luck!