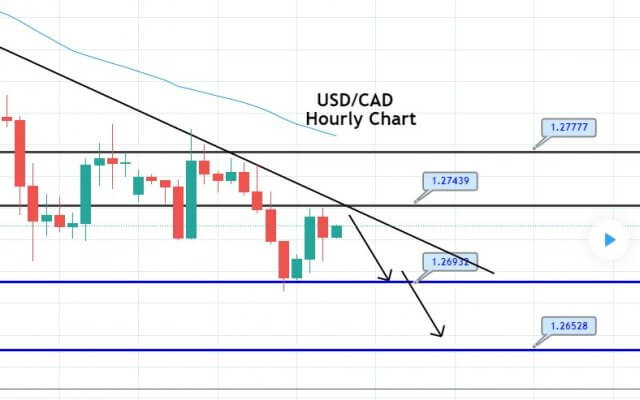 The USD/CAD pair was closed at 1.26982 after placing a high of 1.27713 and a low of 1.26878. After placing gains for two consecutive days, the USD/CAD pair dropped on Tuesday amid the broad-based US dollar weakness and the rising crude oil prices.

The US dollar was weak across the board on Tuesday as the hopes for further stimulus measures from the US Congress increased. The House Speaker Nancy Pelosi called a meeting of Senate Majority Leader Mitch McConnell, Senate Minority Leader Chuck Schumer, and House Majority Leader Kevin McCarthy to discuss the final government funding and coronavirus relief bill.

The optimism that Republicans and Democrats will reach a deal over the bipartisan package of coronavirus added weight on the US dollar and dragged the USD/CAD pair on the downside. Furthermore, the rising risk sentiment in the market and the increasing hopes that vaccine rollouts will help in global economic recovery raised the demand for WTI crude oil prices that gave strength to the commodity-linked Loonie and ultimately added weight on the USD/CAD pair.

Furthermore, the US dollar was also weak across the board on Tuesday because of the rising number of coronavirus cases in the region. The hospitalization rate in the US also increased as a record of 109,331 people were in the hospitals for coronavirus in the US in a single day over the weekend. The death toll has also surpassed 300,000 levels in the US, and this has feared the nation despite the vaccine rollout. These fears added weight on the local currency US dollar that ultimately added in the downward momentum of the USD/CAD pair.

The technical side of the USD/CAD is trading at 1.2728 level, holding below an immediate resistance level of 1.2743 mark which is extended by a downward trendline. On the lower side, the next support holds around 1.2693 level and violation of this level can extend further selling until the next support area of 1.2650 level. The MACD and RSI are in support of selling while the 50 periods EMA is dispensing a strong selling bias in the Loonie. let’s consider taking a selling trade below 1.2743 level until 1.2695 level. Good luck!