The last part of the Bitcoin futures price gap trading is dedicated to the types of gaps and what they represent. Not all gaps are the same, and knowing which one is which will help with using them for trading.

There are four types of price gaps, and while they might look alike, they are all traded differently. It is essential for traders to differentiate between them.

These gaps occur when the price makes a strong and sharp directional move from the consolidation area. This type of gap is particularly powerful when combining it with clear patterns such as trading ranges and patterns (that we covered in previous videos). A breakaway gap that is followed by a significant volume increase is a sign of a strong trend. This gap is somewhat unlikely to be filled, at least in the short term. A low volume move is more likely to see the price returning to the area it was previously in. To sum it up, breakaway gaps are not the best for trading as they are less likely to be filled than some other types of gaps.

Also known as area gaps, temporary gaps, and pattern gaps, they are most often seen in sideways moving markets. They are almost always filled, but the problem is that they offer very little information in regards to what price will do after this occurs.

This type of gap is mostly viewed as a signal for trend reversals. They occur around the end of a price pattern, signaling a final attempt to hit new highs or lows. These gaps occur in markets with rapid upswings or downswings, often on a large move up or down. They are usually preceded by a heavy spike in volume. These are the gaps with the biggest likelihood of being filled.

Also known as runaway or continuation gaps, they occur in the middle of a price pattern. They are considered a signal that buyers or sellers are flocking and trading in the same direction. Measuring gaps will not occur during consolidation periods. They occur only during rapid price upswings or downswings. These gaps are not normally filled for quite some time as the push in one direction is too strong. 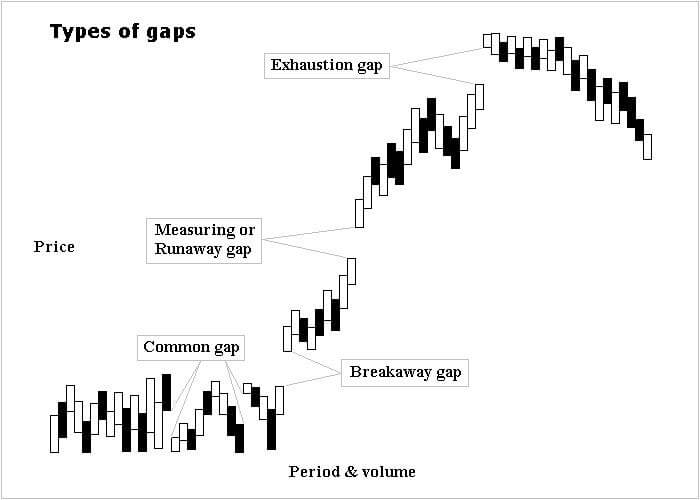 Common mistake traders make when using gaps to trade Bitcoin is confusing exhaustion gaps with measuring gaps. This can cause a trader to position himself in such a way that they will miss significant gains that occur in the last half of an uptrend. Exhaustion and measuring gaps are quite different as they predict moves in completely opposite directions.

Keeping track of volume can help with finding the clue for distinguishing measuring gaps from exhaustion gaps. A noticeable heavy volume would suggest an exhaustion gap, while the lack of heavy volume would indicate a measuring gap is happening. It is also important to note that the filling of the gap rarely stops as there are no immediate support or resistance areas within it.