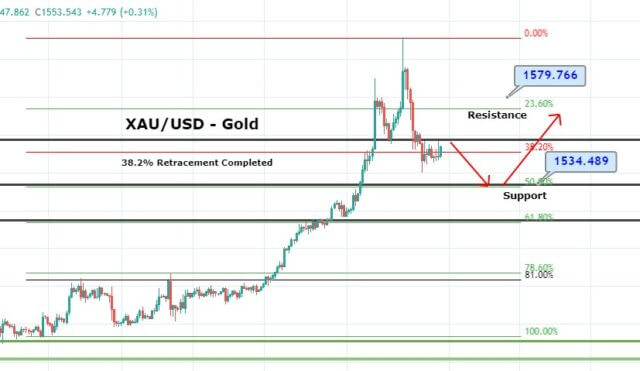 Gold prices trimmed down on Friday, after sinking as much as 1% in the prior session, as rising tensions in the Middle East lead traders to shift to riskier assets. The safe-haven-metal prices still flashing red and continue to drop mainly due to risk-on sentiment in the market in the wake of de-escalated US-Iran conflict.

As we all well aware that the gold prices hit the high level of $1,611 on Wednesday since 7-year high after Iran shot ballistic missiles at two Iraqi airbases housing U.S. forces. But later, U.S. President Donald Trump gave the sluggish comments regarding impose new economic restrictions on Iran rather than taking any military action against the country.

Most Asian markets continued to rise on Friday morning as well because trade talks between the U.S. and China continued to move forward according to the plan and will sign the deal on 15 January.

The statement came from China’s Vice Premier Liu He, head of the country’s negotiation team in China-U.S. trade talks, said that he is set to visit Washington next week to sign a trade deal with the U.S.

Gold traded in line with the prior estimate as it dropped sharply on the breach of 1,552 marks to set a low around 1,538. At the moment, 1,552 is working as a critical trading level. Below this, gold can trade bearish unto 1,542.