Technical Analysis; The Difference Between Leading and Lagging Indicators

When it comes to technical analysis, there are literally dozens of indicators which are available to traders. Choosing the right one for you will depend on your trading style and methodology. Most new traders will go through a process of trial and error when it comes to choosing the correct technical indicators for them. However, it is critical that you know how they work and how they can affect your trading.

Technical indicators are tools and fall into two brackets: leading and lagging indicators. Lagging indicators capture the movements of historical price action data and plots this information onto a chart screen. Traders decipher the patterns and then use it to determine entry and exit points by accessing if a pair is overbought and likely to fall, all or if it oversold and likely to rise, or if it is sideways trading.

Example ‘A’ is an example of a lagging indicator; the Moving Average Convergence Divergence or MACD takes the average move of historical price action over a set period of time and plots the information onto a chart. In this chart of the GBPUSD pair with the 5-minute time frame, we can see that the price action of the pair is very similarly reflected in the MACD with its moving average, which both fluctuate around its 0 axes. Traders use the imagery to back up their theory of future price action.

Example ‘B,’ on the same pair and time frame, is of another lagging indicator, the Stochastic oscillator, which plots historical price action data and tells a trader when a pair is entering into overbought territory such as above the 80-line and when a pair maybe oversold such as below the 20-line. Again, traders use the data to help predict future reversals in price. 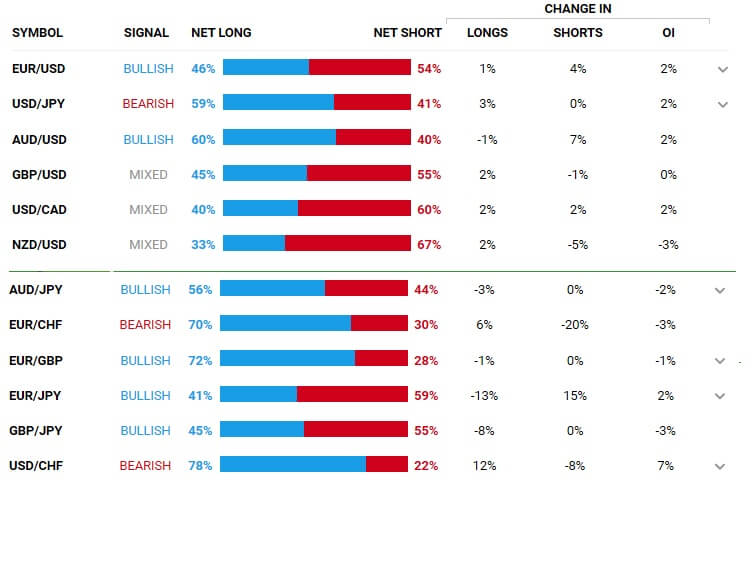 Example F is another leading indicator. This is a screenshot from a forex broker’s clients’ positions table, which shows the net positions of how their traders are positioned on various currency pairs. Many brokers now offer this superb facility which will give traders added comfort when it comes to taking on trades, or act as a warning if the majority of traders on the position table are trading in the opposite direction.