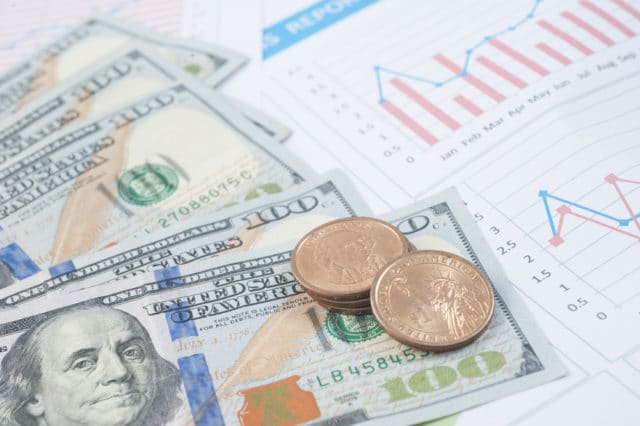 The sentiment was lifted after Chinese President Xi Jinping called for Beijing and Washington to strengthen communications.

The EUR/USD currency pair looking flat and consolidates in the narrow range of 1.1012 / 1.1016. Looking forward, this pair will likely hit the 4-day winning rally mainly due to the hints came regarding a rate cut from the Federal Reserve President Jerome Powell on Monday that interest rates are unlikely to increase anytime soon.

Notably, Powell’s comments indicate the Federal Reserve is likely to hold rates steady for some time until the inflation spikes well above 2 percent.

Therefore, the markets will likely offer the greenback and supporting the EUR/USD currency pairs to hit the bullish level for the first time after November 19. As we know, the currency pair found oo the bearish track yesterday to confirm the 4th-consecutive daily decline.

While Powell’s comments may weigh over the U.S. dollar, the upside in the common currency looks limited, courtesy of weaker Eurozone and German PMIs released last Friday.

Whereas on the other hand, the Federal Reserve President Jerome Powell’s comments could leave the pressure on the greenback, the bullish move in the EUR currency looks limited in the wake of weaker Eurozone and the German PMIs released last Friday.

At the Sino-US front, the report came that the United States and China have reached on the solving trade deal and reduced the risk appetite sentiment in the market. That is visible from the flat action in the Chinese Yuan and the Australian dollar currency. Whereas, the futures on the S&P 500 are also trading in a sideways manner.

The EUR/USD traded as we forecast to drop to 1.1010 level after forming a bearish hammer candle during the previous week. For the moment, the EUR/USD is trading at 1.1020 level and has developed a bullish engulfing pattern on the 2-hour chart. It’s suggesting strong chances of a bullish reversal until 1.1040 and 1.1060 the 38.2% and 61.8% Fibonacci resistance areas. Let’s consider staying bullish above 1.1015 level today to target 1.1060.

The GBP/USD currency pair sidelined and consolidates in the narrow range near the 1.2900 mainly due to traders takes clues from the trade news and Federal Reserve Chairman Jerome Powell diverting markets attention off from the United Kingdoms matters.

At the Sino-US front, the report came that the official from the United States and China discussed the multiple ways to resolve the trade deal matter over the phone call raised the chances of the phase-1 deal between the world’s biggest nations. Traders are ignoring the rising uncertainty regarding the 2nd-phase deal.

Moreover, the United States Federal Reserve Chairman Jerome Powell crossed wires while delivering the speech at the Providence Chamber of Commerce Annual Meeting in Rhode Island. The Fed avoided giving any fresh hints regarding future monetary policy. By the way, his positive preference for household spending ruled out the negative comments regarding global trade and jobs increase.

As well as, the greenback increases its recent rally, whereas the risk sentiment stays almost positive due to the United States’ 10-year treasury yields and major stock indices.

In the United Kingdom (U.K.), the ruling Conservatives and the opposition parties are at each other after the Tory leader, Boris Johnson, released the party’s announcement during the weekend. Whereas the Labour Party is struggling to detect mistakes in the Tory promises, ordering from National Healthcare System (NHS) to Defence, the Liberal Democrats (LibDems) doubts the Prime Minister (PM) Boris Johnson led to party’s ability to offer smooth Brexit before the Christmas.

There is no significant data and event for decorating the economic calendar, so the traders will keep their eyes on the U.S. catalysts to plan near-term trading bias. Moreover, the 2nd-tier housing and manufacturing data will join Consumer Confidence and speech from the Fed Governor Lael Brainard.

China said on Sunday that it would seek to improve protections for intellectual property rights, including raising the upper limits for compensation for rights violations.

China rolled out plans to strengthen its rules on copyrights, patents, and trademarks. This subject has been one core sticking point in more than a year of trade negotiations with the United States.

It was reported that by 2022, China would be making progress in issues that have affected intellectual property rights enforcement, such as low compensation, high costs, and the difficulty of proof. And that a better system of protection should be placed by 2025.

The rules around Intellectual property rights have been a major complaint against China and have been boosting the dispute between the most significant economies from the year. It was reported by US International trade Administration in 2018 that the estimated Intellectual Property theft has cost American businesses up to $600 billion a year.

The unauthorized access to a wide range of commercially valuable business information, technical data, trade secrets, and proprietary internal communications by the Chinese Government has been a burden on US commerce. In response to this, the need to address intellectual property rules came out against China by Trump administration, which led to increased tariffs on thousands of products and cast uncertainty on business activity across the globe.

The USD/JPY is trading at 108.700, and it has just violated the triple top resistance area of 108.600. The closings of bullish candles above 108.600 level are extending support to the safe-haven currency USD/JPY. With this, the market opens further room for buying until 109.090 for the USD/JPY pair. Besides, the MACD and RSI are still holding in the bullish zone. Consider taking buying trades over 108.650 to target 109 today.